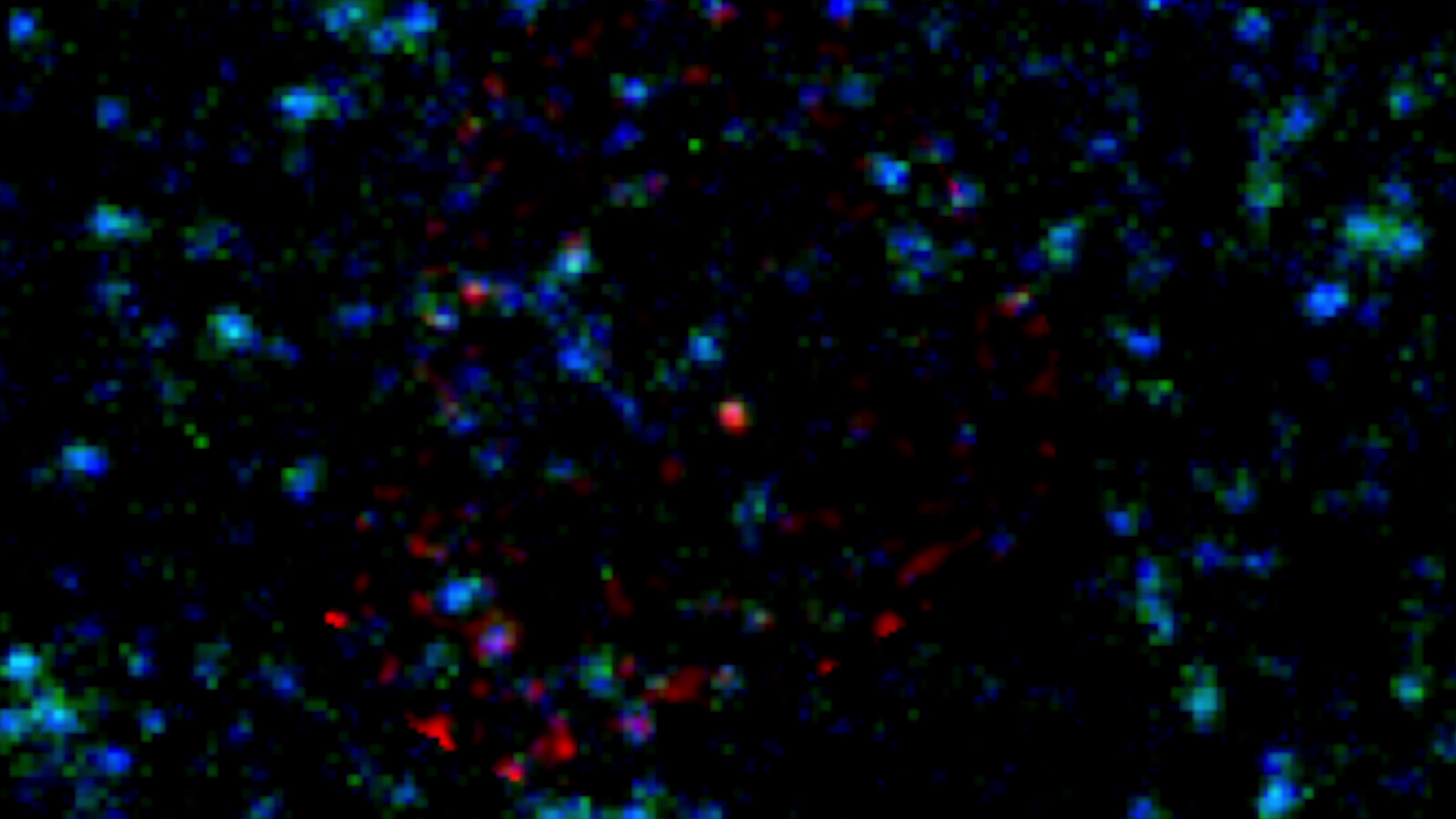 What seemed at first like a rare instance of a huge, ancient galaxy revealed itself to be an even rarer pair of extremely massive galaxies, seen on the brink of merging when the Universe was only a billion years old.

The earliest galaxies in the 13.8 billion-year history of our cosmos started to take shape a few hundred million years after the Big Bang, as matter flowed towards increasingly denser spots and as the first stars were igniting into life.

Primordial galaxies, however, were not like the ones we are familiar with today. They started out much smaller than our Milky Way galaxy, which is now home to hundreds of billions of stars, and slowly grew more massive over billions of years.

In this scenario, astronomers could not easily explain the observation of massive galaxies populated by ageing stars at relatively early epochs in cosmic history, when the Universe was only a few billion years old.

How did such massive galaxies assemble in this relatively short time?

The recent discovery of possible progenitors to such galaxies – massive galaxies observed at even earlier cosmic times – has brought new clarity to these investigations.

“Scrutinising several hundred thousand galaxies observed by Herschel, we identified a very rare instance of a massive object in the very early Universe,” says Dominik Riechers from Cornell University, USA, who is the lead author of the new study.

The wide range of infrared and submillimetre wavelengths probed by Herschel, which scanned the sky between 2009 and 2013, was key to finding this source.

Galaxies that are forming stars shine brightly in the infrared. This is due to cosmic dust present in the dense clouds where stars are born, which absorbs part of the starlight and radiates it again at longer wavelengths.

In addition, because the Universe is expanding, the wavelength of light emitted by distant galaxies is stretched even longer along its cosmic journey, up to the submillimetre in the case of the most distant galaxies, whose light was released in the first few billion years of cosmic history.

It was 2012 when Dominik and colleagues singled out this source as potentially interesting and worthy of follow-up observations. After they looked at it at even longer submillimetre wavelengths with Europe’s Atacama Pathfinder Experiment (APEX), also located in Chile, it stood out as the ‘reddest’ in this galaxy sample, appearing consistently brighter at increasingly longer wavelengths, up to 870 micron.

This suggested that the galaxy is ripe with star formation and located at a great distance from us, in the depth of the very early Universe.

Using further observations obtained with ALMA, the astronomers spotted carbon monoxide and water vapour in this object, and used these emissions to estimate how far away it is from us. This confirmed that they were observing the source as it was only a billion years after the Big Bang.

The high-resolution observations performed with ALMA had an extra surprise in store.

“On closer inspection, this unique object was even more exciting than we could expect, consisting not just of one ancient, massive galaxy, but of a pair of distinct massive galaxies about to merge,” explains Dominik.

These two galaxies, each roughly as massive as our Milky Way, were informally dubbed the ‘Horse’ and the ‘Dragon’.

Teeming with star formation, they are 10 to 100 times more massive than most galaxies at the same epoch in the Universe’s history. The Horse and the Dragon will eventually come together, giving rise to an even more massive galaxy in a few hundred million years’ time.

The finding demonstrates that giant galaxies, albeit rare, did exist at very early cosmic epochs and could well be the progenitors of the massive ones harbouring ageing stars that are observed at slightly later times, when the Universe’s age was only a couple billions of years.

The team is now busy investigating this extreme merging system in even greater detail, studying the properties of its stellar population and dust with ALMA as well as with the European Southern Observatory’s Very Large Telescope.

“We are also looking for possible satellites, smaller galaxies that might have been caught in the gravitational field of the two behemoths, as we would expect from theory,” says Dominik.

In the near future, observations with the NASA/ESA/CSA James Webb Space Telescope, to be launched in 2019, will allow astronomers to delve deeper into the secrets of this system.

Further into the future, there will be an additional tool to investigate the early Universe through galactic mergers – though only those at a much more advanced stage than the Horse and the Dragon, when the supermassive black holes at the centre of each galaxy are about to coalesce. Such cosmic collisions release gravitational waves – fluctuations in the fabric of spacetime – that can be observed by ESA’s future gravitational wave observatory, LISA.

In the meantime, it is unlikely that many more systems like the one recognised by Dominik and his collaborators will be uncovered. If current theories about galaxy formation are correct, such beasts are extremely rare. Nevertheless, the team will keep investigating data from the Herschel archive for possible evidence of other interesting sources.

“This will continue to be the case for many years.”

ALMA is an international astronomy facility, and a partnership between the European Southern Observatory, the US National Science Foundation and the National Institutes of Natural Sciences of Japan in collaboration with the Republic of Chile. More about ALMA partners.