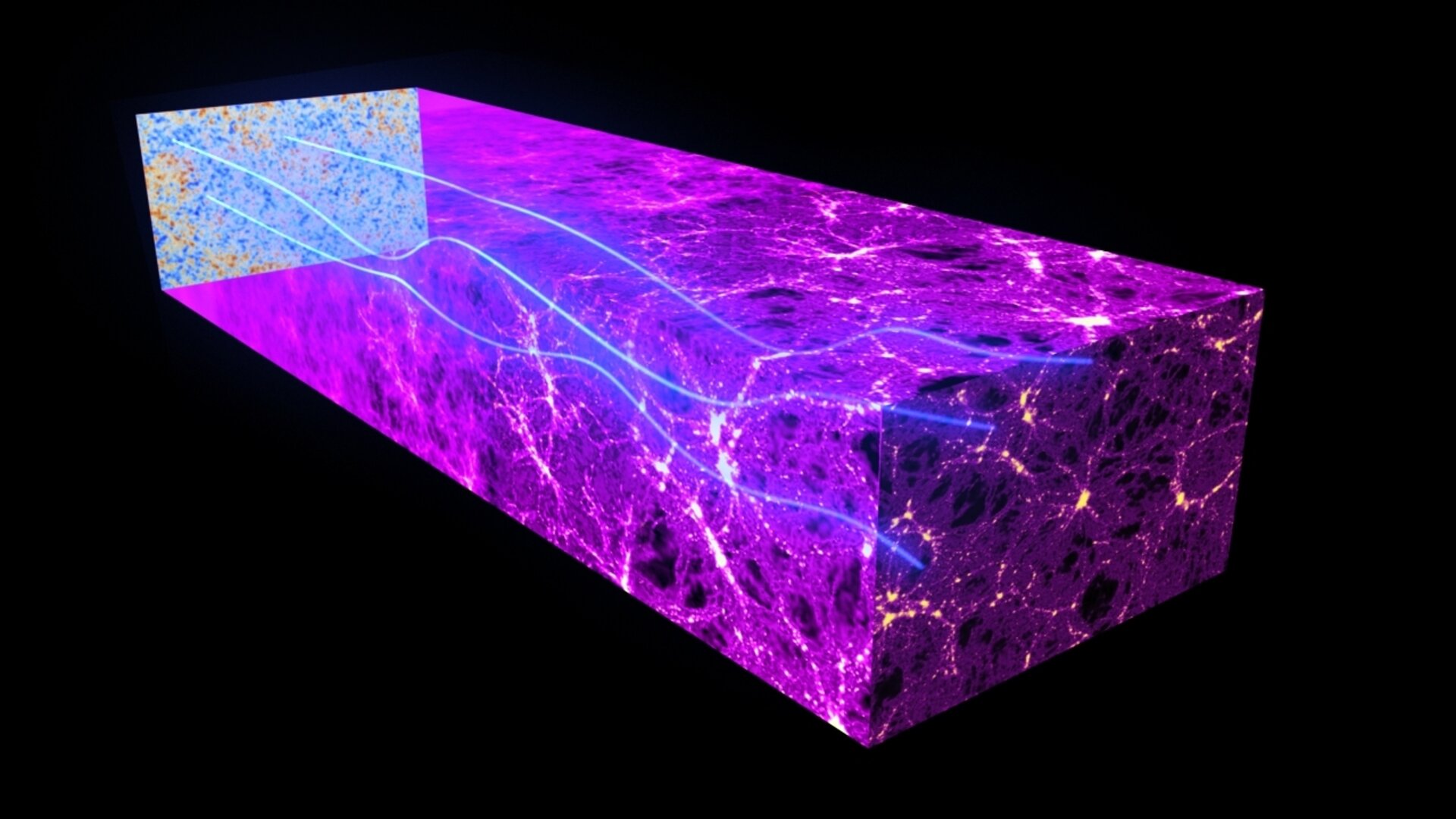 Using a telescope in Antarctica and ESA’s Herschel space observatory, astronomers have made the first detection of a subtle twist in the relic radiation from the Big Bang, paving the way towards revealing the first moments of the Universe’s existence.

The elusive signal was found in the way the first light in the Universe has been deflected during its journey to Earth by intervening galaxy clusters and dark matter, an invisible substance that is detected only indirectly through its gravitational influence.

The relic radiation from the Big Bang – the Cosmic Microwave Background, or CMB – was imprinted on the sky when the Universe was just 380 000 years old. Today, some 13.8 billion years later, we see it as a sky filled with radio waves at a temperature of just 2.7 degrees above absolute zero.

But the CMB also contains a wealth of other information. A small fraction of the light is polarised, like the light we can see using polarised glasses. This polarised light has two distinct patterns: E-modes and B-modes.

E-modes were first found in 2002 with a ground-based telescope. B-modes, however, are potentially much more exciting to cosmologists, although much harder to detect.

They can arise in two ways. The first involves adding a twist to the light as it crosses the Universe and is deflected by galaxies and dark matter – a phenomenon known as gravitational lensing.

The second has its roots buried deep in the mechanics of a very rapid phase of enormous expansion of the Universe, which cosmologists believe happened just a tiny fraction of a second after the Big Bang – ‘inflation’.

The new study has combined data from the South Pole Telescope and Herschel to make the first detection of B-mode polarisation in the CMB due to gravitational lensing.

“This measurement was made possible by a clever and unique combination of ground-based observations from the South Pole Telescope – which measured the light from the Big Bang – with space-based observations from Herschel, which is sensitive to the galaxies that trace the dark matter which caused the gravitational lensing,” says Joaquin Vieira, of the California Institute of Technology and the University of Illinois at Urbana-Champaign, who led the Herschel survey used in the study.

By using Herschel’s observations, the scientists mapped the gravitational lensing material along the line of sight, and then searched for correlations between that pattern and the polarised light coming from the CMB, as measured by the South Pole Telescope.

“It’s an important checkpoint that we’re able to detect this small lensing B-mode signal and it bodes well for our ability to ultimately measure an even more elusive type of B-mode created during the inflationary Big Bang,” adds Duncan Hanson of McGill University, Montreal, Canada and lead author of the paper published this week in Physical Review Letters.

Scientists believe that during inflation, violent collisions between clumps of matter and between matter and radiation, should have created a sea of gravitational waves. Today, those waves would be imprinted in a primordial B-mode component of the CMB.

Finding such a signal would yield crucial information about the very early Universe, well before the time when the CMB itself was generated, and would provide confirmation of the inflation scenario.

In 2014, new results will be released from ESA’s Planck, and the most eagerly anticipated is whether primordial B-modes have been detected. In the meantime, Herschel has helped to point the way.

“It is great to see this ingenious use of Herschel data in achieving the first detection of gravitational lensing B-modes in the CMB polarisation,” says Göran Pilbratt, ESA’s Herschel Project Scientist. “This work displays yet another use of the treasure trove of Herschel data.”

“Detection of B-mode Polarization in the Cosmic Microwave Background with Data from the South Pole Telescope,” by D. Hanson, et al., is published in Physical Review Letters 30 September 2013.

The study is based on data from SPTpol, the polarisation-sensitive instrument of the South Pole Telescope, and from the SPIRE instrument of ESA’s Herschel Space Observatory.