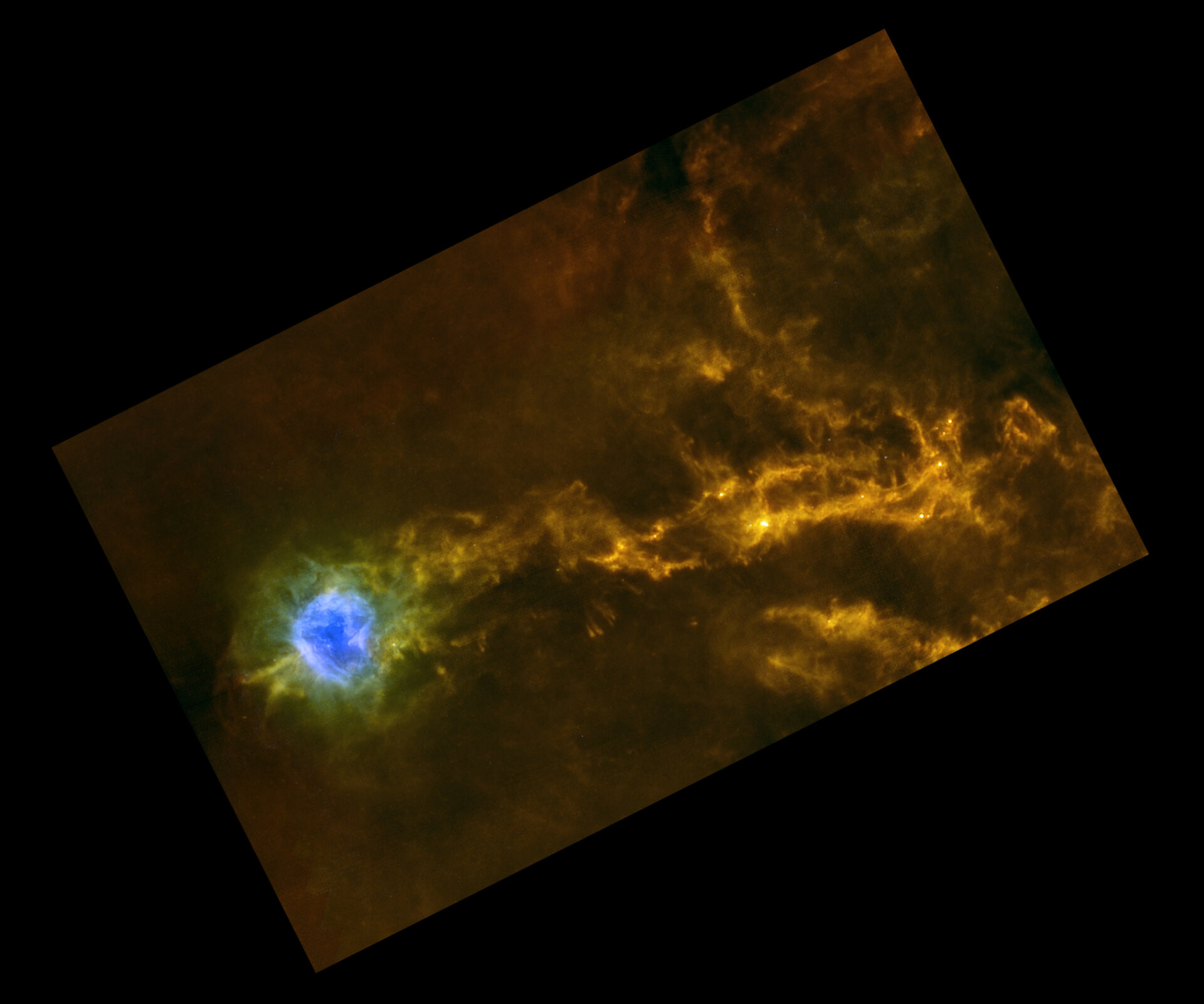 ESA’s Herschel space observatory has revealed that nearby interstellar clouds contain networks of tangled gaseous filaments. Intriguingly, each filament is approximately the same width, hinting that they may result from interstellar sonic booms throughout our Galaxy.

The filaments are huge, stretching for tens of light years through space and Herschel has shown that newly-born stars are often found in the densest parts of them. One filament imaged by Herschel in the Aquila region contains a cluster of about 100 infant stars.

Such filaments in interstellar clouds have been glimpsed before by other infrared satellites, but they have never been seen clearly enough to have their widths measured. Now, Herschel has shown that, regardless of the length or density of a filament, the width is always roughly the same.

“This is a very big surprise,” says Doris Arzoumanian, Laboratoire AIM Paris-Saclay, CEA/IRFU, the lead author on the paper describing this work. Together with Philippe André from the same institute and other colleagues, she analysed 90 filaments and found they were all about 0.3 light years across, or about 20 000 times the distance of Earth from the Sun. This consistency of the widths demands an explanation.

Comparing the observations with computer models, the astronomers concluded that filaments are probably formed when slow shockwaves dissipate in the interstellar clouds. These shockwaves are mildly supersonic and are a result of the copious amounts of turbulent energy injected into interstellar space by exploding stars. They travel through the dilute sea of gas found in the Galaxy, compressing and sweeping it up into dense filaments as they go.

Interstellar clouds are usually extremely cold, about 10 degrees Kelvin above absolute zero, and this makes the speed of sound in them relatively slow at just 0.2 km/s, as opposed to 0.34 km/s in Earth’s atmosphere at sea-level.

These slow shockwaves are the interstellar equivalent of sonic booms. The team suggests that as the sonic booms travel through the clouds, they lose energy and, where they finally dissipate, they leave these filaments of compressed material.

“This is not direct proof, but it is strong evidence for a connection between interstellar turbulence and filaments. It provides a very strong constraint on theories of star formation,” says Dr André.

The team made the connection by studying three nearby clouds, known as IC5146, Aquila, and Polaris, using Herschel’s SPIRE and PACS instruments.

“The connection between these filaments and star formation used to be unclear, but now thanks to Herschel, we can actually see stars forming like beads on strings in some of these filaments,” says Göran Pilbratt, the ESA Herschel Project Scientist.