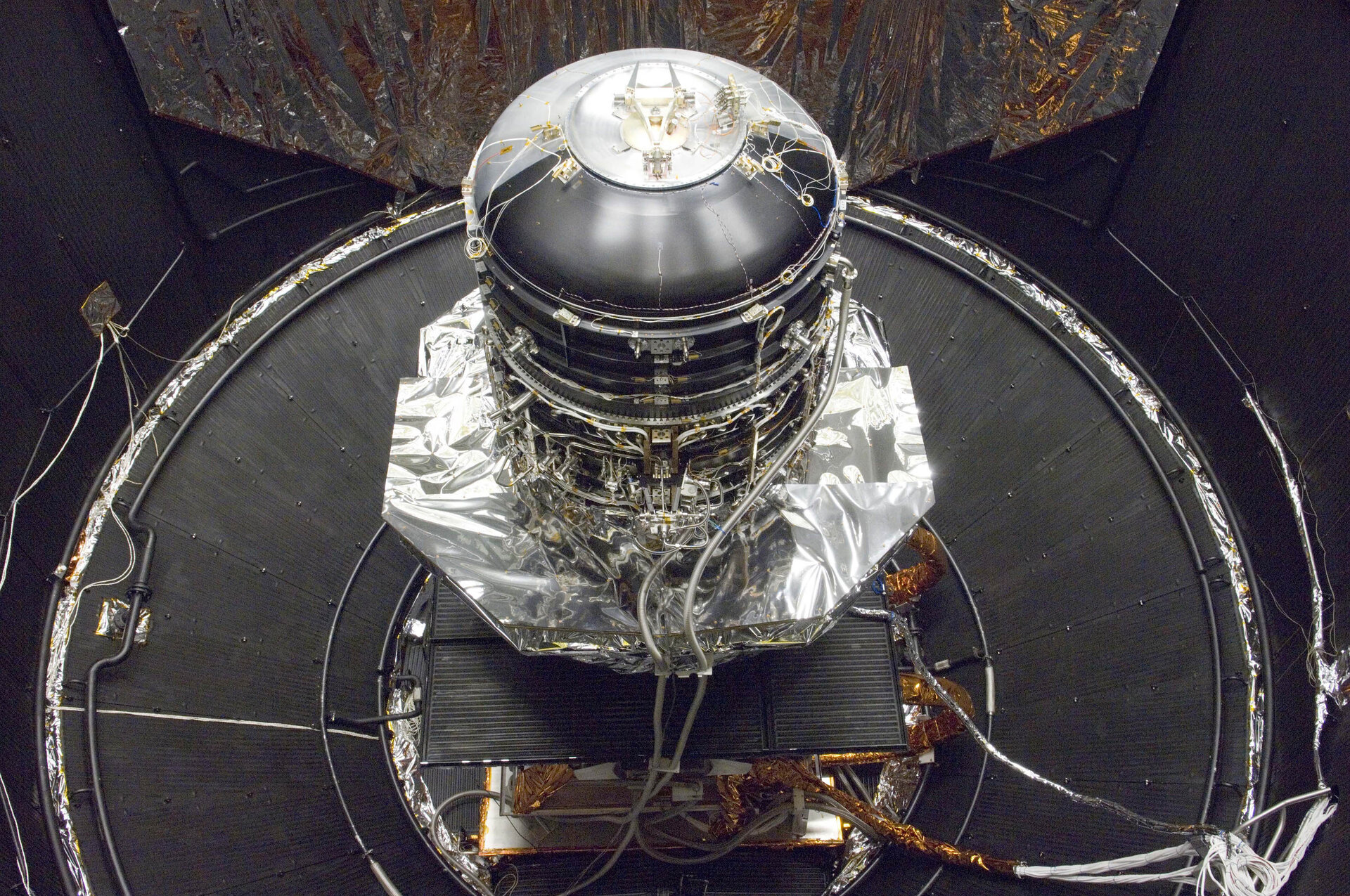 The heart of ESA's infrared space telescope, Herschel, has successfully completed a vital round of tests. The cylindrical cryostat will now be loaded with the spacecraft's instruments before more tests and Herschel’s eventual launch in 2008.

Herschel's cryostat is a complex vacuum flask, 2.5 metres high and 2 metres wide. It is vital to the mission because Herschel's instruments need a temperature of 1.7 Kelvin (–271.3 degrees Celsius) to operate within their most sensitive range. The instrument surroundings must equally be very cold, to enable Herschel to see to see the infrared emission from cool matter in the Universe. If the cryostat and instruments reach higher temperatures they will emit infrared, overwhelming that from the celestial objects.

Herschel must sit in the full glare of the hot Sun because it uses a solar panel to turn sunlight into electrical power. The cryostat is therefore essential to cool the instruments. The cryostat sits behind the solar panel, isolated from it by several layers of insulation, and contains two tanks that will be filled with liquid helium.

The first procedure in the just completed cycle of tests was the 'bake out'. In this process, the empty cryostat was heated to 80 degrees centigrade. Heating drives out any volatile substances including any residual water left inside the cryostat. Water reduces the quality of the insulation so its removal is vital to the lifetime of the cryostat. "In effect, the bake out cleans the cryostat," says Thomas Passvogel, Herschel's Project Manager.

Next, the engineering team simulated the launch campaign. The cryostat was cooled down and the tanks were filled with liquid helium just as they will be five days before launch. The main tank holds 2250 litres of superfluid helium. The small tank is used to extend the ground 'hold' time of the system. The team monitored the helium temperature increase in the main tank, while cooling the cryostat with helium evaporating from the small tank. Every second day, they topped-up the small tank.

When they do this for real, at the launch site in Kourou, French Guiana, the cryostat will be able to withstand a launch delay of one day before the temperature in the main tank gets too high to launch safely. If the delay is any longer, the rocket will be rolled back to the assembly building and the engineers will have to recondition the main tank, refill it and subcool it.

The final tests in the current round were to monitor the behaviour of the cryostat with the outer vessel at ambient temperature; then to load it into the Large Space Simulation chamber at the European Science and Technology Centre (ESTEC) and monitor it again, this time under the conditions that Herschel will find in space. "We need these two extremes so that we can correlate computer models to predict what will happen inside the cryostat between launch and when it cools to its final operating temperature," says Passvogel.

Now that Herschel’s cryostat has passed all these tests and supplied excellent data for the team, the task of placing the instruments inside must begin. Then there will be more tests, in preparation for the July 2008 launch.