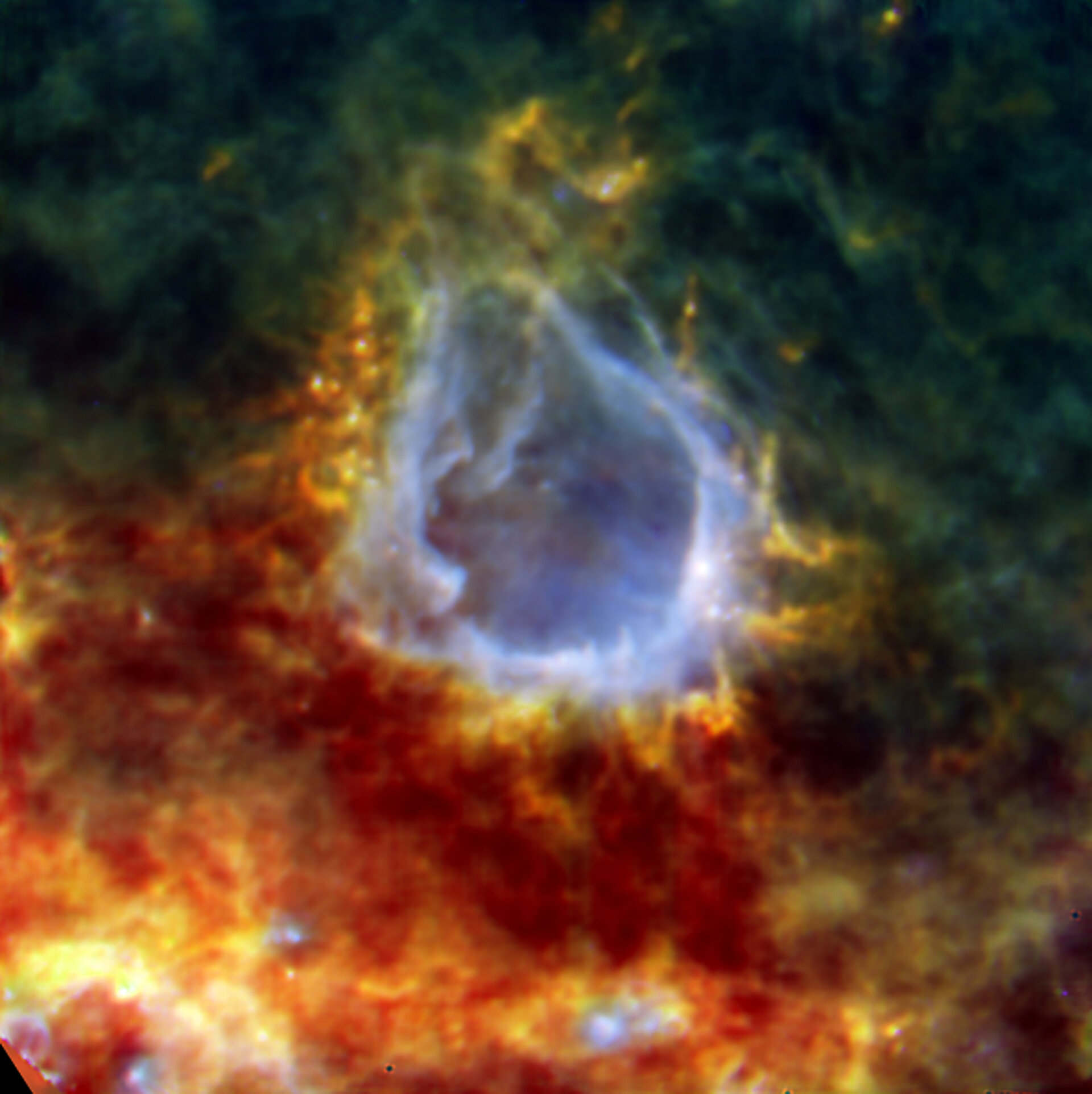 Herschel’s observation of the star-forming cloud RCW 120 has revealed an embryonic star which looks set to turn into one of the biggest and brightest stars in our Galaxy within the next few hundred thousand years. It already contains eight to ten times the mass of the Sun and is still surrounded by an additional 2000 solar masses of gas and dust from which it can feed further.

“This star can only grow bigger,” says Annie Zavagno, Laboratoire d’Astrophysique de Marseille. Massive stars are rare and short-lived. To catch one during formation presents a golden opportunity to solve a long-standing paradox in astronomy. “According to our current understanding, you should not be able to form stars larger than eight solar masses,” says Dr Zavagno.

This is because the fierce light emitted by such large stars should blast away their birth clouds before any more mass can accumulate. But somehow they do form. Many of these ‘impossible’ stars are already known, some containing up to 150 solar masses, but now that Herschel has seen one near the beginning of its life, astronomers can use the data to investigate how it is defying their theories.

Herschel is the largest astronomical telescope ever to be placed into space. The diameter of its main mirror is four times larger than any previous infrared space telescope and one and a half times larger than Hubble. As stars begin to form, the surrounding dust and gas is warmed up to a few tens of degrees above absolute zero and starts to emit at far-infrared wavelengths. The Earth's atmosphere completely blocks the majority of these wavelengths and thus observations from space are necessary.

Using its unprecedented resolution and sensitivity, Herschel is conducting a census of star-forming regions in our Galaxy. “Before Herschel, it was not clear how the material in the Milky Way came together in high enough densities and at sufficiently low temperatures to form stars,” says Sergio Molinari, Istituto di Fisica dello Spazio Interplanetario, Roma.

A new Herschel image released today covering a number of stellar nurseries in the Milky Way shows how it happens. Stellar embryos first appear inside filaments of glowing dust and gas draped across the Galaxy. These form chains of stellar nurseries, tens of light-years long, wrapping the Galaxy in a web of star birth.

Herschel has also been surveying deep space beyond our Galaxy, and has measured the infrared light from thousands of other galaxies, spread across billions of light-years of the Universe. Each galaxy appears as just a pinprick but its brightness allows astronomers to determine the rate of star birth within it. Roughly speaking, the brighter the galaxy the more stars it is forming.

In the past, there were many more so-called ‘starburst’ galaxies forming stars at 10–15 times the rate we see in the Milky Way today. But what triggered this frantic activity is not completely understood. “Herschel will now let us investigate the reasons for this behaviour,” says Steve Eales, Cardiff University, UK.

Herschel is also a prime instrument for detecting the smallest forms of matter: molecules. It has made the first discovery in space of a new ‘phase’ of water. It is electrically charged and unlike the more familiar phases, namely solid ice, liquid water and gaseous steam, it does not occur naturally on Earth. In the birth clouds surrounding young stars, however, where ultraviolet light is pumping through the gas, this irradiation can knock an electron out of the water molecule, leaving it with an electrical change.

“This detection of ionised water vapour came as a surprise,” says Arnold Benz, ETH Zurich, Switzerland. “It tells us that there are violent processes taking place during the early birth stages which lead to widespread energetic radiation throughout the cloud.”  From the biggest galaxies to the smallest molecules, these and many other Herschel results are being presented to the scientific community at the Herschel First Results Symposium, ESLAB 2010, taking place this week at ESA’s ESTEC space research and technology centre, in Noordwijk in the Netherlands.

“These are still early days for Herschel and this is just the beginning of all the science that we will get from this mission in the years to come,” says Göran Pilbratt, ESA Herschel Project Scientist.