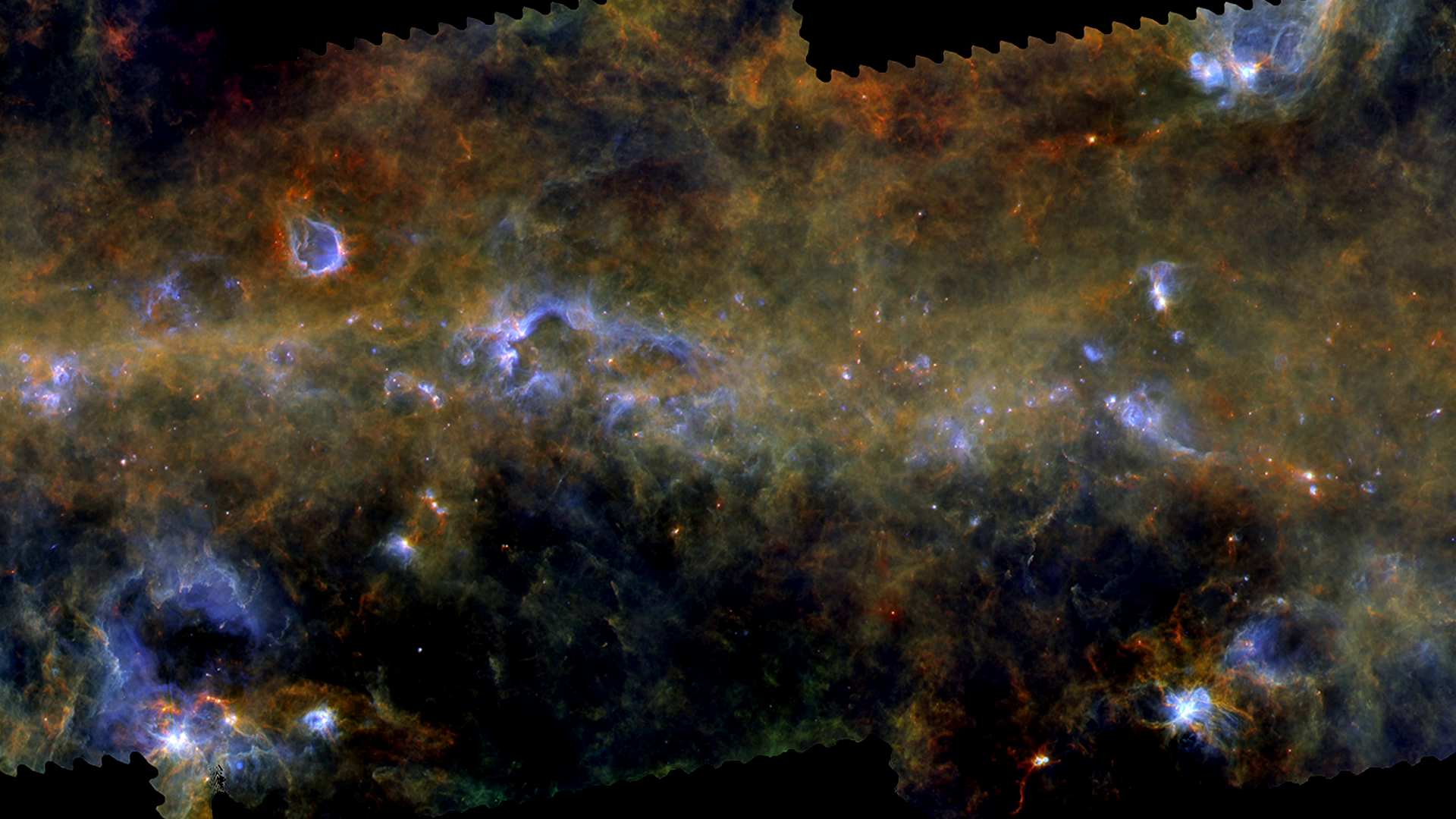 This new video from ESA’s Herschel space observatory reveals in stunning detail the intricate pattern of gas, dust and star-forming hubs along the plane of our Galaxy, the Milky Way.

Against the diffuse background of the interstellar material, a wealth of bright spots, wispy filaments and bubbling nebulas emerge, marking the spots where stars are being born in the Galaxy.

The video was compiled by stitching together several hundred hours of Herschel observations. It spans a vast portion – almost 40% – of the plane of the Milky Way, where most of the stars in the Galaxy form and reside.

Our disc-shaped Galaxy has a diameter of about 100 000 light-years and the Solar System is embedded in it about half way between the centre and periphery. From our vantage point, this huge disc of stars, gas and dust appears as a circular strip winding around the sky, familiar as the Milky Way in the night sky.

Denser portions of the interstellar medium, the mixture of gas and dust that pervades the Galaxy, are visible in orange and red, popping up against the background in this false-colour view. These concentrations of matter, often arranged in long, thread-like structures, are the sites where future generations of stars will form.

The tiny white spots that appear sprinkled over the filaments are denser clumps of gas and dust, embedding the seeds of stars that are slowly taking shape.

In contrast, the glowing blue and violet gas is set ablaze by the powerful light emitted by newborn stars in their vicinity. This signature of full-fledged stars completes the inventory of all stages in the process of stellar formation that are portrayed in this stunning panorama.

A set of individual images extracted from the video reveal several jewels nestled in the Galactic Plane, such as the Eagle Nebula, the Cat’s Paw Nebula, and the War and Peace Nebula.

These billowing clouds are home to clusters of young stars that are shining brightly and driving powerful winds, which are in turn carving cavities in the surrounding material, while at the same time the nebulas are ceaselessly witnessing the birth of new stars within them.

The image of RCW 120 tells another tale of relentless star formation: a star at the centre, invisible at these infrared wavelengths, has blown a beautiful bubble around itself with the mighty pressure of the light it radiates.

The pressure is so strong that it has compressed the material at the edge of the bubble, causing it to collapse and triggering the birth of new stars.

More interesting sights are revealed near the Galactic Centre, where the density of stars is greater than elsewhere in the Milky Way.

There, the clouds of gas and dust appear distributed along a giant, twisted ring, over 600 light-years wide, encompassing the supermassive black hole sitting at the Galaxy’s core.

Herschel obtained these unprecedented views by peering at the Milky Way in far infrared light to detect the glow of cosmic dust – a minor but crucial component of the interstellar mixture from which stars are born.

Read more on the release of these maps.