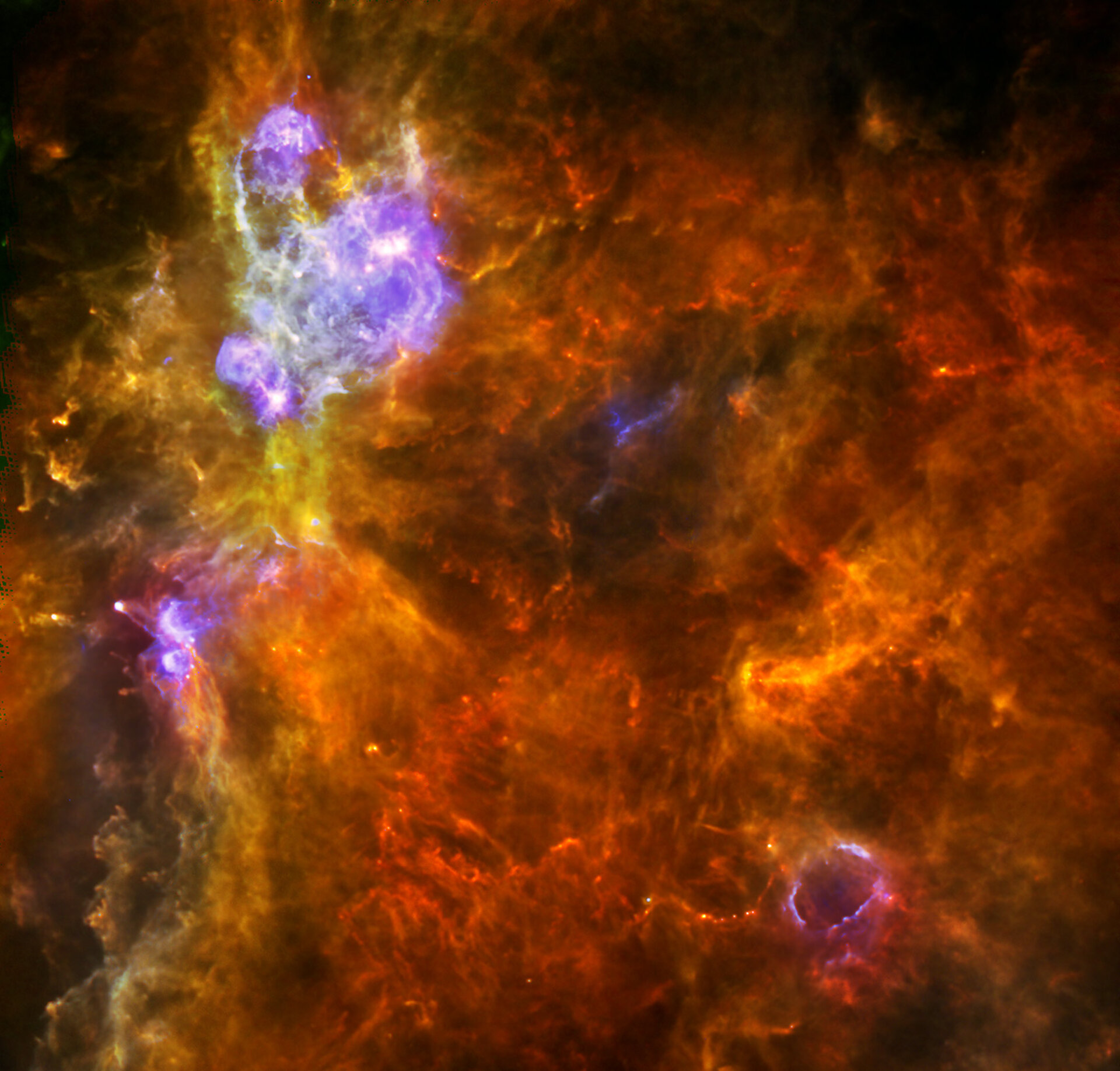 In this new view of a vast star-forming cloud called W3, ESA’s Herschel space observatory tells the story of how massive stars are born.

W3 is a giant molecular cloud containing an enormous stellar nursery, some 6200 light-years away in the Perseus Arm, one of our Milky Way Galaxy’s main spiral arms.

Spanning almost 200 light-years, W3 is one of the largest star-formation complexes in the outer Milky Way, hosting the formation of both low- and high-mass stars. The distinction is drawn at eight times the mass of our own Sun: above this limit, stars end their lives as supernovas.

Dense, bright blue knots of hot dust marking massive star formation dominate the upper left of the image in the two youngest regions in the scene: W3 Main and W3 (OH). Intense radiation streaming away from the stellar infants heats up the surrounding dust and gas, making it shine brightly in Herschel’s infrared-sensitive eyes.

Older high-mass stars are also seen to be heating up dust in their environments, appearing as the blue regions labelled AFGL 333 in the lower left of the annotated version of the image, and the loop of KR 140, at bottom right.

Extensive networks of much colder gas and dust weave through the scene in the form of red filaments and pillar-like structures. Several of these cold cores conceal low-mass star formation, hinted at by tiny yellow knots of emission.

By studying the two regions of massive star formation – W3 Main and W3 (OH) – scientists have made progress in solving one of the major conundrums in the birth of massive stars. That is, even during their formation, the radiation blasting away from these stars is so powerful that they should push away the very material they are feeding from. If this is the case, how can massive stars form at all?

Observations of W3 point toward a possible solution: in these very dense regions, there appears to be a continuous process by which the raw material is moved around, compressed and confined, under the influence of clusters of young, massive protostars.

Through their strong radiation and powerful winds, populations of young high-mass stars may well be able to build and maintain localised clumps of material from which they can continue to feed during their earliest and most chaotic years, despite their incredible energy output.

The study was part of the Guaranteed Time Key Programme HOBYS, the Herschel imaging survey of OB Young Stellar objects.