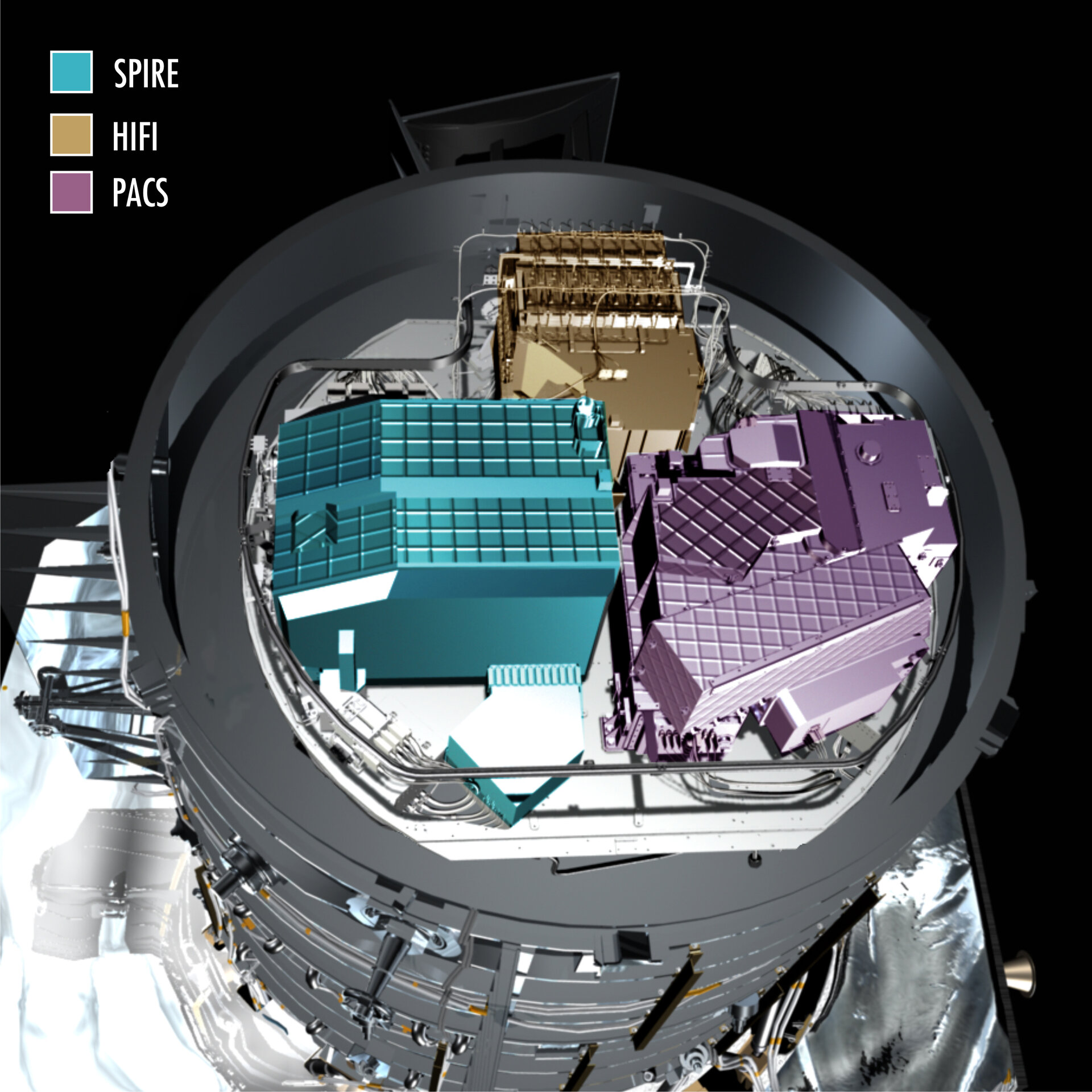 Herschel was equipped with three instruments that turned the telescope from a mere light-collector into powerful infrared eyes.

The Heterodyne Instrument for the Far Infrared (HIFI)

HIFI, a high-resolution spectrometer, was designed to observe unexploited wavelengths. With its high spectral resolution – the highest ever in the range of wavelengths it covered – HIFI observed an unprecedented level of detail: it observde and identified individual molecular species in the enormity of space, and studied their motion, temperature, and other physical properties. This is fundamental to the study of comets, planetary atmospheres, star formation and the development of distant and nearby galaxies.

PACS comprised a colour camera and an imaging spectrometer. Within its wavelength range (55–210 microns), the PACS camera was the first instrument capable of obtaining the complete image of a target at once. The PACS spectrometer had a lower resolution than that of HIFI, but was perfectly suited to seeing young galaxies and the gas clouds from which stars form.

PACS operated either as a special camera (photometer) in two colours simultaneously, or as a spectrometer, using either its bolometer or its photoconductor array detectors. It was designed and built by a nationally-funded consortium led by the Max Planck Institute for Extraterrestrial Physics (Garching, Germany); the consortium includes institutes from Belgium, Austria, France, Italy and Spain.

SPIRE also operated at wavelengths that had not been exploited before (194–672 microns). Like PACS, it consisted of a colour camera and an imaging spectrometer, and it covered a complementary range of wavelengths. It was designed to study the star formation history of the Universe.

SPIRE performed photometry; that is, it measured the intensity of the radiation emitted by an astronomical object, in three bands simultaneously, centred on 250, 350 and 500 microns. It was also be operated as an imaging spectrometer. It was designed and built by a nationally-funded consortium led by Cardiff University (Cardiff, UK); the consortium includes France, Canada, China, Italy, Spain, Sweden and the US.

Together, PACS and SPIRE covered six colours of the infrared rainbow.

Herschel's three instruments were complementary: each instrument was designed to study gas and dust, but at different temperatures and states. Thanks to the large range of wavelengths covered, they were able to witness the entire process of star formation, from the earliest stages of condensation to the moment at which the protostar emerges from its cocoon and is born.