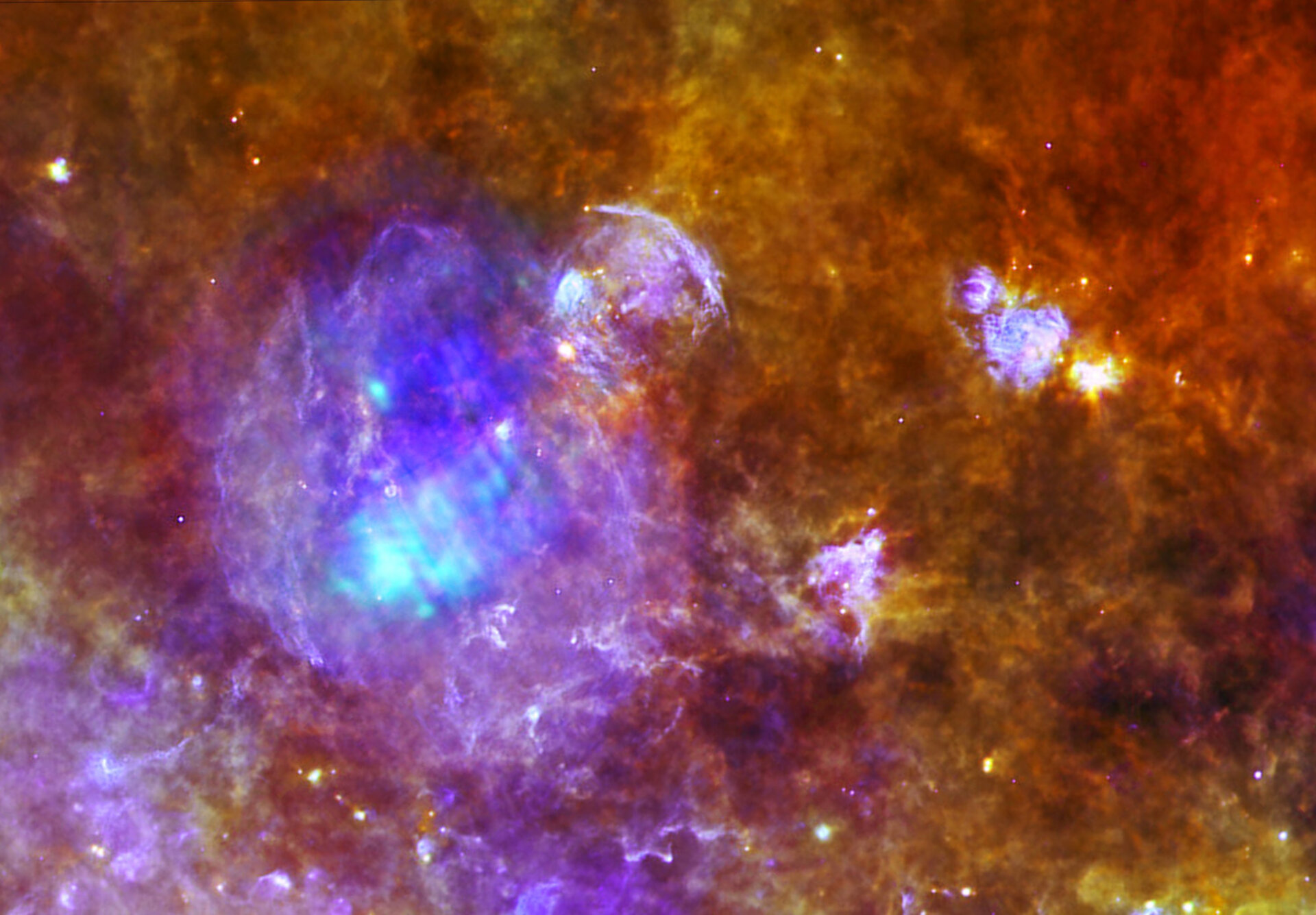 The aftershock of a stellar explosion rippling through space is captured in this new view of supernova remnant W44, which combines far-infrared and X-ray data from ESA’s Herschel and XMM-Newton space observatories.

W44, located around 10 000 light-years away within a forest of dense star-forming clouds in the constellation of Aquila, the Eagle, is one of the best examples of a supernova remnant interacting with its parent molecular cloud.

The product of a massive star that has already reached the end of its life and expelled its outer layers in a dramatic explosion, all that remains of the stellar behemoth is the spinning core of a neutron star, or pulsar.

Identified as PSR B1853+01, the pulsar is the bright point to the top left in W44, coloured light blue in this image.

It is thought to be around 20 000 years old and as it rapidly rotates it sweeps out a wind of highly energetic particles and beams of light ranging from radio to X-ray energies.

The centre of the supernova remnant is also bright in X-rays, coming from the hot gas that fills the shell, at temperatures of several million degrees. Dense knots of high-energy emission reflect regions where heavier elements are more commonly found.

At the cooler edge of the cavity, gas is swept up as the supernova remnant propagates through space.

At the top right of the expanding shell, there is a smaller cavity, with the shock from the supernova remnant impacting the bight arc-shaped feature. This region is filled with hot gas that has been ionised by the intense ultraviolet radiation from embedded young massive stars.

Herschel’s far-infrared eyes can also seek out regions of gently heated gas and dust further from W44, where new stars are congregating.

Examples include the arrowhead-shaped star-formation region to the right of W44, which appears to point to another trio of intricate clouds further to the right and above.

More broadly, a number of compact objects scattered across the scene map the cold seeds of future stars that will eventually emerge from their dusty cocoons.

Finally, diffuse purple emission towards the bottom left of the image provides a glimpse of the Galactic plane.