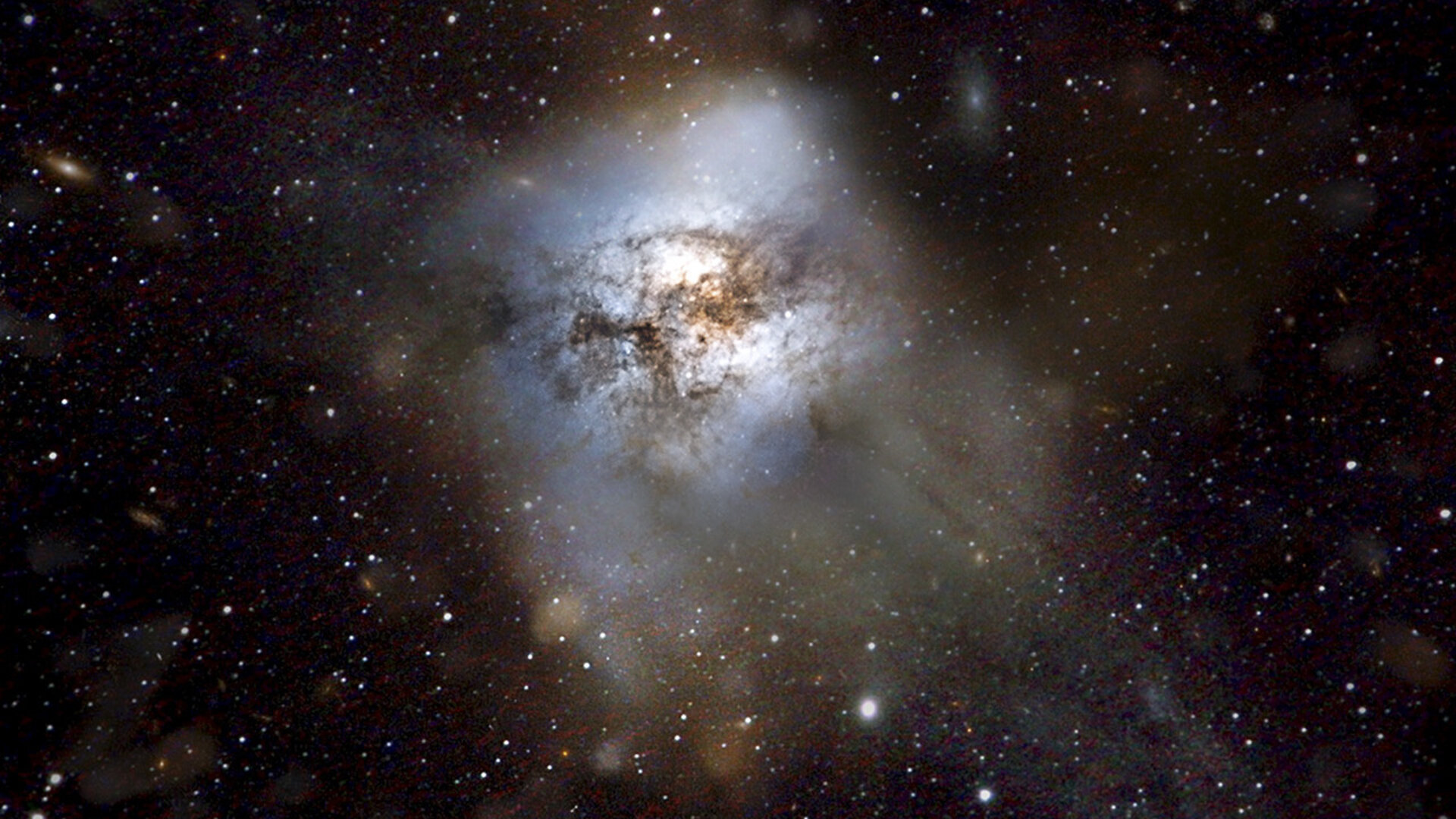 ESA’s Herschel space observatory has discovered an extremely distant galaxy making stars more than 2000 times faster than our own Milky Way. Seen at a time when the Universe was less than a billion years old, its mere existence challenges our theories of galaxy evolution.

The galaxy, known as HFLS3, appears as little more than a faint, red smudge in images from the Herschel Multi-tiered Extragalactic Survey (HerMES). Yet appearances can be deceiving: this small smudge is actually a star-building factory, furiously transforming gas and dust into new stars.

Our own Milky Way makes stars at a rate equivalent to one solar mass per year, but HFLS3 is seen to be churning out new stars at more than two thousand times more rapidly. This is one of the highest star formation rates ever seen in any galaxy.

The extreme distance to HFLS3 means that its light has travelled for almost 13 billion years across space before reaching us. We therefore see it as it existed in the infant Universe, just 880 million years after the Big Bang or at 6.5% of the Universe’s current age.

Even at that young age, HFLS3 was already close to the mass of the Milky Way, with roughly 140 billion times the mass of the Sun in the form of stars and star-forming material. After another 13 billion years, it should have grown to be as big as the most massive galaxies known in the local Universe.

This makes the object an enigma. According to current theories of galaxy evolution, galaxies as massive as HFLS3 should not be present so soon after the Big Bang.

The first galaxies to form are expected to be relatively small and lightweight, containing only a few billion times the mass of our Sun. They form their first stars at rates of a few times that experienced by the Milky Way today.

The small galaxies then grow by feeding off cold gas from intergalactic space and by merging with other small galaxies. So, finding the age at which the first massive galaxies appeared can constrain galaxy evolution theories. But this is not easy.

“Looking for the first examples of these massive star factories is like searching for a needle in a haystack; the Herschel dataset is extremely rich,” says Dominik Riechers of Cornell University, who led the investigation.

Tens of thousands of massive, star-forming galaxies have been detected by Herschel as part of HerMES and sifting through them to find the most interesting ones is a challenge.

“This particular galaxy got our attention because it was bright, and yet very red compared to others like it,” says co-investigator Dave Clements of Imperial College London.

Red in this case means brightest at longer infrared wavelengths and, owing to the effect of redshift in our expanding Universe, this can indicate extreme distance. Follow-up observations with a suite of ground-based telescopes confirmed that HFLS3 was the most distant galaxy of its kind ever found, seen just 880 million years after the Big Bang, at redshift 6.34.

With this in hand, the astronomers were able to confidently translate the galaxy’s infrared brightness into a star formation rate, discovering its extraordinary nature.

HFLS3 is making so many stars that it is called a ‘maximum starburst’. The whole galaxy is wreathed in star formation, to the point where the intense radiation of the young stars almost blows away the star-forming material in the galaxy. Environments like this do not exist on galaxy-wide scales in the Universe today.

“Early starbursts like HFLS3 produced the heavy elements that made up later generations of stars and galaxies, and much of the matter we know today,” says Dr Riechers.

Even in the early Universe, they are expected to be extremely rare. The mere existence of a single such object so early in the Universe poses a challenge to current theories of early galaxy formation, which predict that they should reach such large masses only much later.

The team are continuing to comb the enormous dataset from Herschel looking for more examples of such extreme, early galaxies.

“With these observations, Herschel has found a rare example of a galaxy bursting with stars at a time in cosmic history when there were very few such galaxies,” says Göran Pilbratt, ESA’s Herschel Project Scientist.

“This underlines the pioneering nature of Herschel and its ability to reveal a previously hidden Universe, improving our understanding of how galaxies form.”

The survey was conducted as part of the Herschel Multi-tiered Extragalactic Survey (HerMES), led by S. Oliver of the University of Sussex, UK and J. Block of JPL/Caltech, USA.