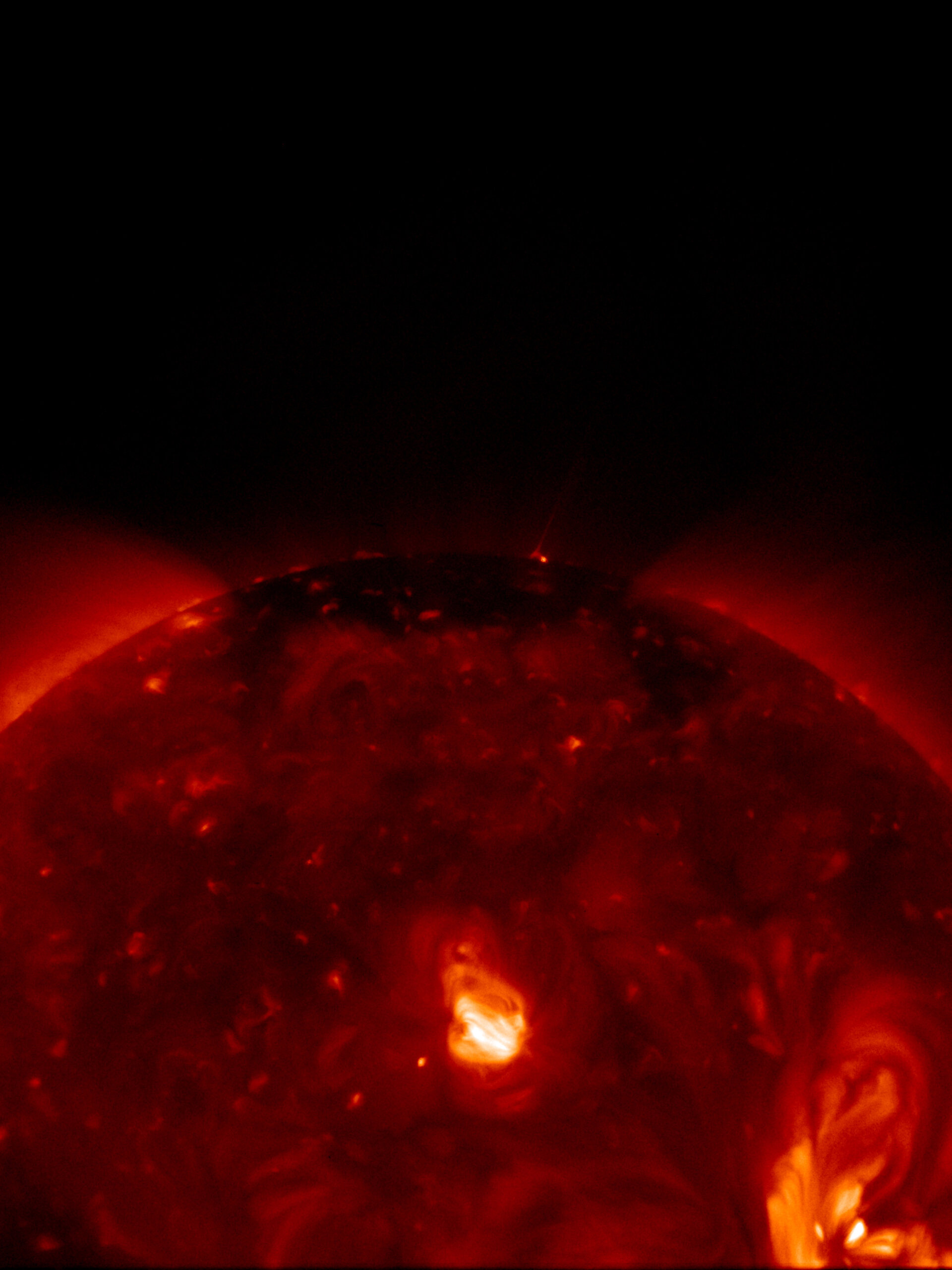 Spectacular images and data from the Hinode mission have shed new light on the Sun's magnetic field and the origins of solar wind, which can disrupt power grids, satellites and communications on Earth.

The results are published in the 7 December issue of the journal Science.

Data from Hinode, a Japanese (JAXA) mission with ESA participation, shows that magnetic waves play a critical role in driving the solar wind into space. The solar wind is a stream of electrically charged gas that is propelled away from the Sun in all directions at speeds of almost 1.5 million km/h. Better understanding of the solar wind may lead to more accurate prediction of damaging radiation waves before they reach satellites.

How the solar wind is formed and powered has been the subject of debate for decades. Powerful magnetic waves in the electrically charged gas near the Sun (called Alfvén waves) have always been a leading-candidate force in the formation of solar wind. In principle, such waves can transfer energy from the Sun's surface up through its atmosphere, or corona, into the solar wind.

In the solar atmosphere, Alfvén waves are created when convective motions and sound waves push magnetic fields around, or when dynamic processes create electrical currents that allow the magnetic fields to change shape or reconnect.

"Until now, Alfvén waves have been impossible to observe because of limited resolution of available instruments," said Alexei Pevtsov, Hinode program scientist, at NASA Headquarters, Washington, USA. "With the help of Hinode, we are now able to see direct evidence of Alfvén waves, which will help us unravel the mystery of how the solar wind is powered."

With Hinode's higher sensitivity, Cirtain's team observed an average of 240 jets per day. They conclude that magnetic reconnection, a process where two oppositely charged magnetic fields collide and release energy, is frequently occurring in the low solar corona. This interaction forms both Alfvén waves and the burst of energized plasma in X-ray jets.

"These observations show a clear relationship between magnetic reconnection and Alfvén wave formation in the X-ray jets." said Cirtain. "The large number of jets, coupled with the high speeds of the outflowing plasma, lends further credence to the idea that X-ray jets are a driving force in the creation of the fast solar wind."

Another research team led by Bart De Pontieu, a solar physicist at Lockheed Martin's Solar and Astrophysics Laboratory, California, USA, focused on the Sun's chromosphere, the region sandwiched between the solar surface and its corona. Using extremely high-resolution images from Hinode's Solar Optical Telescope, De Pontieu's team found that the chromosphere is riddled with Alfvén waves. When the waves leak into the corona, they are strong enough to power the solar wind.

"We find that most of these Alfvén waves have periods of several minutes, much longer than many theoretical models have assumed in the past," says De Pontieu. Comparisons with advanced computer simulations from the University of Oslo, Norway, indicate that reconnection is not the only source of the Alfvén waves. "The simulations imply that many of the waves occur when the Sun's magnetic field is jostled around by convective motions and sound waves in the low atmosphere," continued De Pontieu.

Hinode was launched in September 2006 to study the Sun's magnetic field and how its explosive energy propagates through the different layers of the solar atmosphere.

The other part of the joint contribution to Hinode consists of ground station coverage through the SvalSat downlink station at Svalbard, which nearly quadruples the data rate and thus significantly increases Hinode’s science return. Svalsat is the only station in the world that can receive Hinode’s data during each of its 15 daily orbits. Hinode's operations centre is located at JAXA's facility in Sagamihara, Japan.