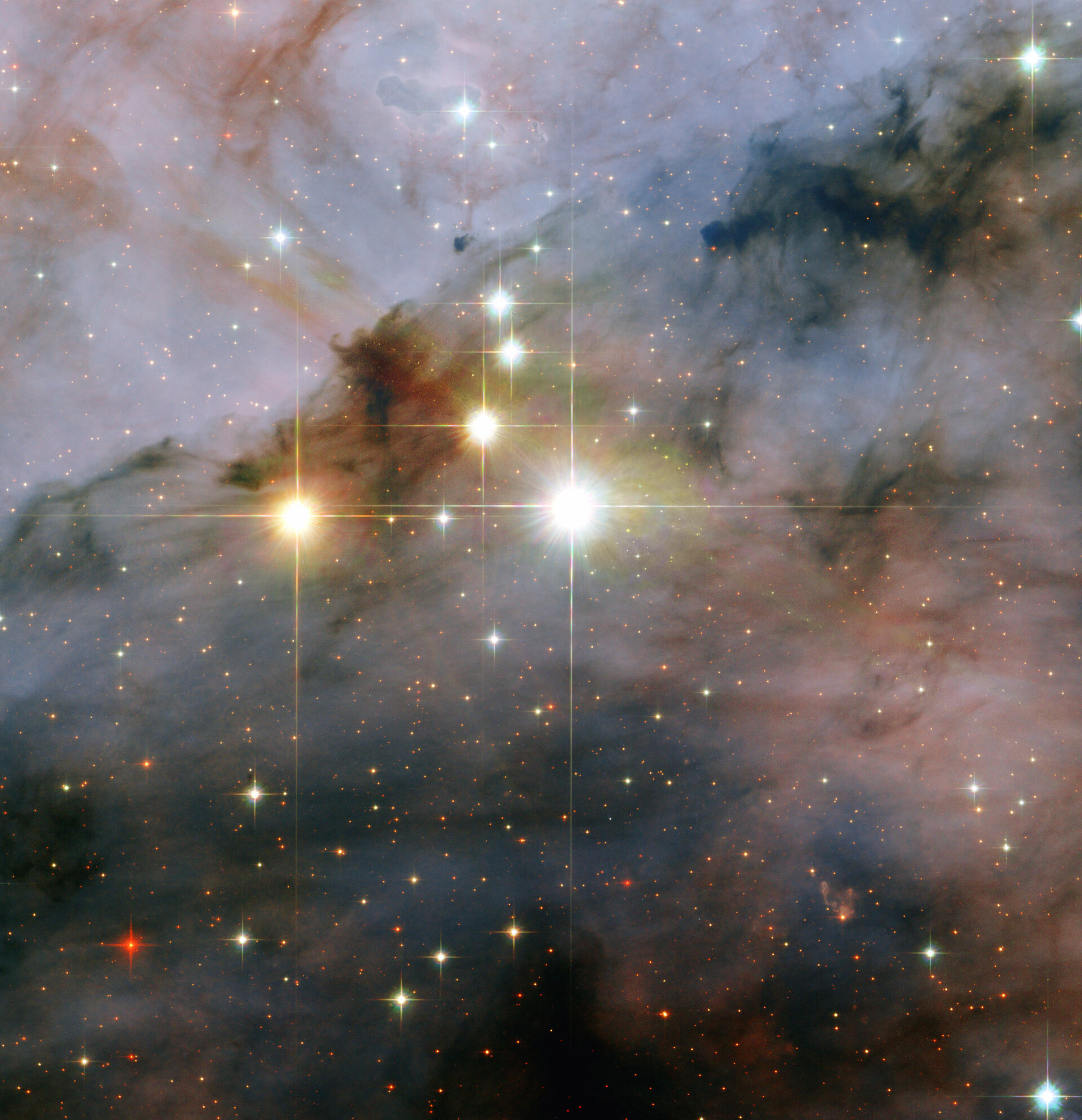 Two of our galaxy's most massive stars, until recently shrouded in mystery, have been viewed by the NASA/ESA Hubble Space Telescope, unveiling greater detail than ever before.

The image shows a pair of colossal stars, WR 25 and Tr16-244, located within the open cluster Trumpler 16. This cluster is embedded within the Carina Nebula, an immense cauldron of gas and dust that lies approximately 7500 light-years from Earth. The Carina Nebula contains several ultra-hot stars, including these two star systems and the famous blue star Eta Carinae, which has the highest luminosity yet confirmed.

These stars are very bright and they produce incredible amounts of heat, emitting most of their radiation in the ultraviolet and appearing blue in colour. They are so powerful that they burn through their hydrogen fuel source faster than other types of stars, leading to a ‘live fast, die young’ stellar lifestyle.

WR 25 is the brightest, situated near the centre of the image. The neighbouring Tr16-244 is the third brightest, just to the upper left of WR 25. The second brightest, to the left of WR 25, is a low-mass star located much closer to Earth than the Carina Nebula. Stars like WR 25 and Tr16-244 are relatively rare compared to other, cooler types. They interest astronomers because they are associated with star-forming nebulae, and influence the structure and evolution of galaxies.

WR 25 is likely to be the most massive and interesting of the two. Its true nature was revealed two years ago when an international group of astronomers led by Roberto Gamen, then at the Universidad de La Serena in Chile, discovered that it is composed of at least two stars. The more massive is a Wolf-Rayet star and may weigh more than 50 times the mass of our Sun. It is losing mass rapidly through powerful stellar winds that have expelled the majority of its outermost hydrogen-rich layers, while its more mundane binary companion is probably about half as massive as the Wolf-Rayet star, and orbits it once every 208 days.

Massive stars are usually formed in compact clusters. Often, the individual stars are physically so close to each other that it is very difficult to resolve them in telescopes as separate objects. These Hubble observations have revealed that the Tr16-244 system is actually a triple star.

Two of the stars are so close to each other that they look like a single object, but Hubble's Advanced Camera for Surveys shows them as two (see the separate image). The third star takes tens or hundreds of thousands of years to orbit the other two. The brightness and proximity of the components of such massive double and triple stars make it particularly challenging to analyse the properties of massive stars.

WR 25 and Tr16-244 are the likely sources of radiation that is causing a giant gas globule within the Carina Nebula to slowly evaporate away into space, while possibly inducing the formation of new stars within it (see separate image). The radiation is also thought to be responsible for the globule's interesting shape, prominently featured in earlier Hubble images, which looks like a hand with a ‘defiant’ finger pointing towards WR 25 and Tr16-244.

These new observations were obtained by a team including astronomers from US, Chilean, Spanish, and Argentinian institutions and led by Jesús Maíz Apellániz from the Instituto de Astrofísica de Andalucía in Spain. They are using Hubble along with ground-based observatories in Spain, Chile, and Argentina to build a comprehensive catalogue of observations of all the massive stars in the Galaxy that are detectable at visible wavelengths.