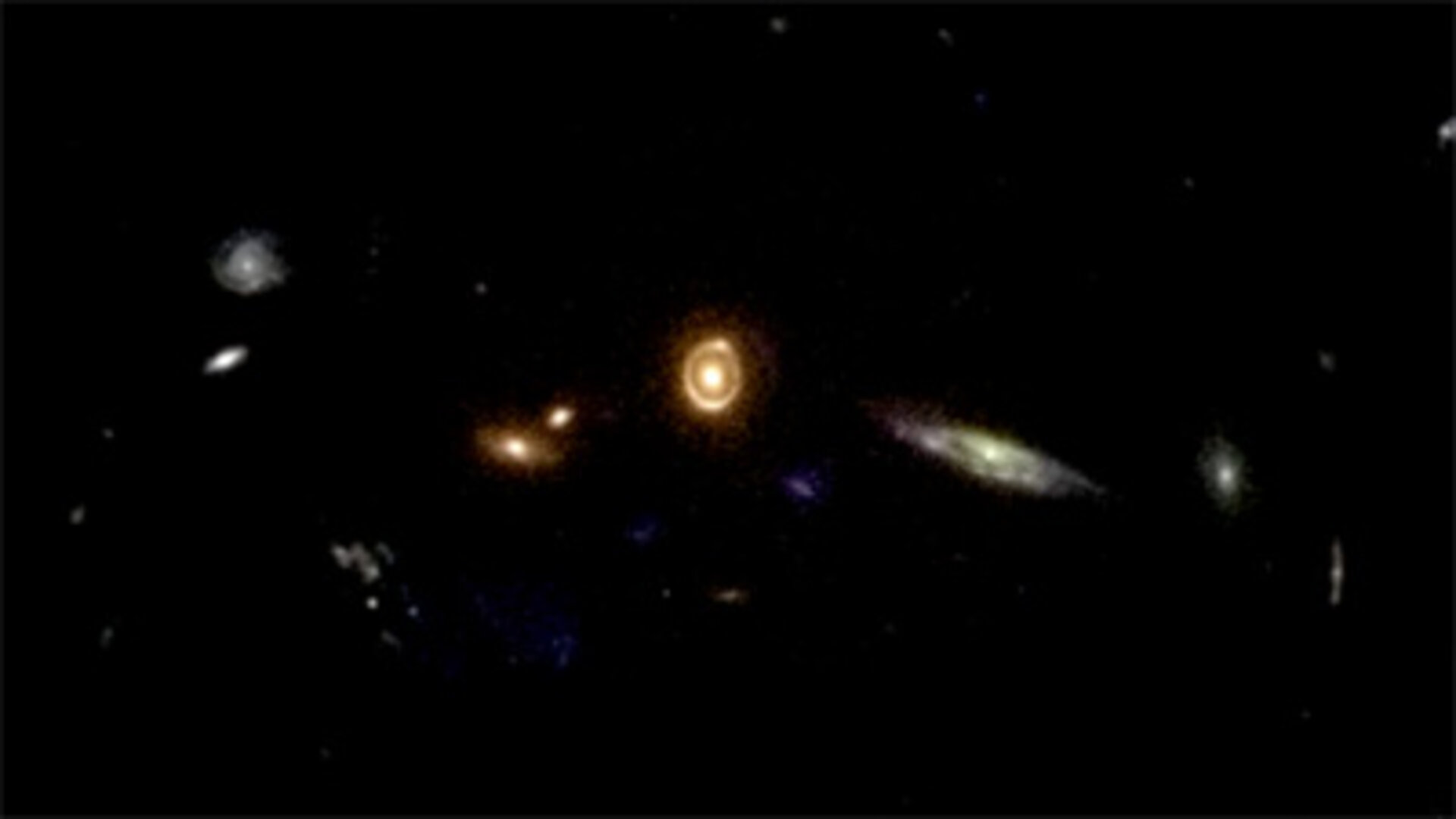 Gravitational lensing occurs when light travelling towards us from a distant galaxy is magnified and distorted as it encounters a massive object. Such gravitational lenses often allow astronomers to peer farther back into the early universe than normally possible.

The massive objects that distort light are usually huge clusters of massive galaxies. “We typically see the gravitational lens create a series of bright arcs or spots around a galaxy cluster. What we are observing here is a similar effect but on a much smaller scale – happening only around a single but very massive galaxy,” says Jean-Paul Kneib, Laboratoire d’Astrophysique de Marseille, one of the leaders of the team that analysed images from Hubble’s Advanced Camera for Survey (ACS).

The 67 gravitational lenses were identified in the framework of the COSMOS project, aimed at the survey of an area of the sky which measures nine times the area of the full Moon, with several space-based and Earth-based observatories. Out of these 67 lenses, the most impressive ones show the distorted and warped light of one or two background galaxies. At least four of the lenses give rise to Einstein rings, a complete circular image of a background galaxy. Such a ring is formed when the background galaxy, a massive foreground galaxy and the Hubble Space Telescope are all aligned perfectly.

Hubble astronomers went through a unique process to identify these incredible natural lenses. First, possible galaxies were identified from a two-million-strong galaxy catalogue. “We then had to look through each individual COSMOS image by eye and identify any potential strong gravitational lenses,” said Cécile Faure (Zentrum für Astronomie, University of Heidelberg), also leader of this study.

Finally, checks were made to see if the foreground galaxy and the lensed galaxy were really different or just one galaxy with an odd shape. “With this sample of gravitational systems identified by the human eye, we now plan use the sample of lenses to devise software to find more of these lenses across the entire Hubble image archive, and we may find even more strong lensing systems in the COSMOS field,” added Jean-Paul Kneib.

The new results confirm that the Universe is filled with gravitational lensing systems. Extrapolating these new findings to the whole sky, predicts no less than half a million similar lenses in total. The future prospects for finding more of these systems are thus excellent.

The study of these gravitational lenses will give astronomers a first-rate opportunity to probe the dark matter distribution around galactic lenses. Once astronomers find even larger numbers of these smaller, stronger lenses, they can be used to create a census of galaxy masses in the universe to test the predictions of cosmological models.

The lenses were discovered in the framework of the COSMOS project (led by Nick Scoville at the California Institute of Technology, USA ) aimed at the survey of an area of the sky nine times the area of the full Moon with several space-based and Earth-based observatories. These include the Hubble Space Telescope, as well as the Spitzer Space Telescope, the XMM-Newton spacecraft, the Chandra X-ray Observatory, the Very Large Telescope (VLT), the Subaru Telescope and the Canada-France-Hawaii Telescope (CFHT).

A team of European astronomers led by Jean-Paul Kneib (Laboratoire d’Astrophysique de Marseille) and Cécile Faure (Zentrum für Astronomie, University of Heidelberg) analysed the results from Hubble’s Advanced Camera for Surveys (ACS). From ACS high-resolution images, complemented by the extensive ground-based follow-up observations, astronomers have identified 67 strong gravitationally-lensed galaxies. These were found around very massive galaxies that are usually elliptical or lenticular in shape and often exhibit a paucity of gas and dust, without spiral arms or discs. The strong lensing produced by massive galaxies is much more common than the usual giant ‘arc’ gravitationally lensed galaxies that Hubble has previously observed; but they are generally more difficult to find as they extend over a smaller area and have a wide variety of shapes.