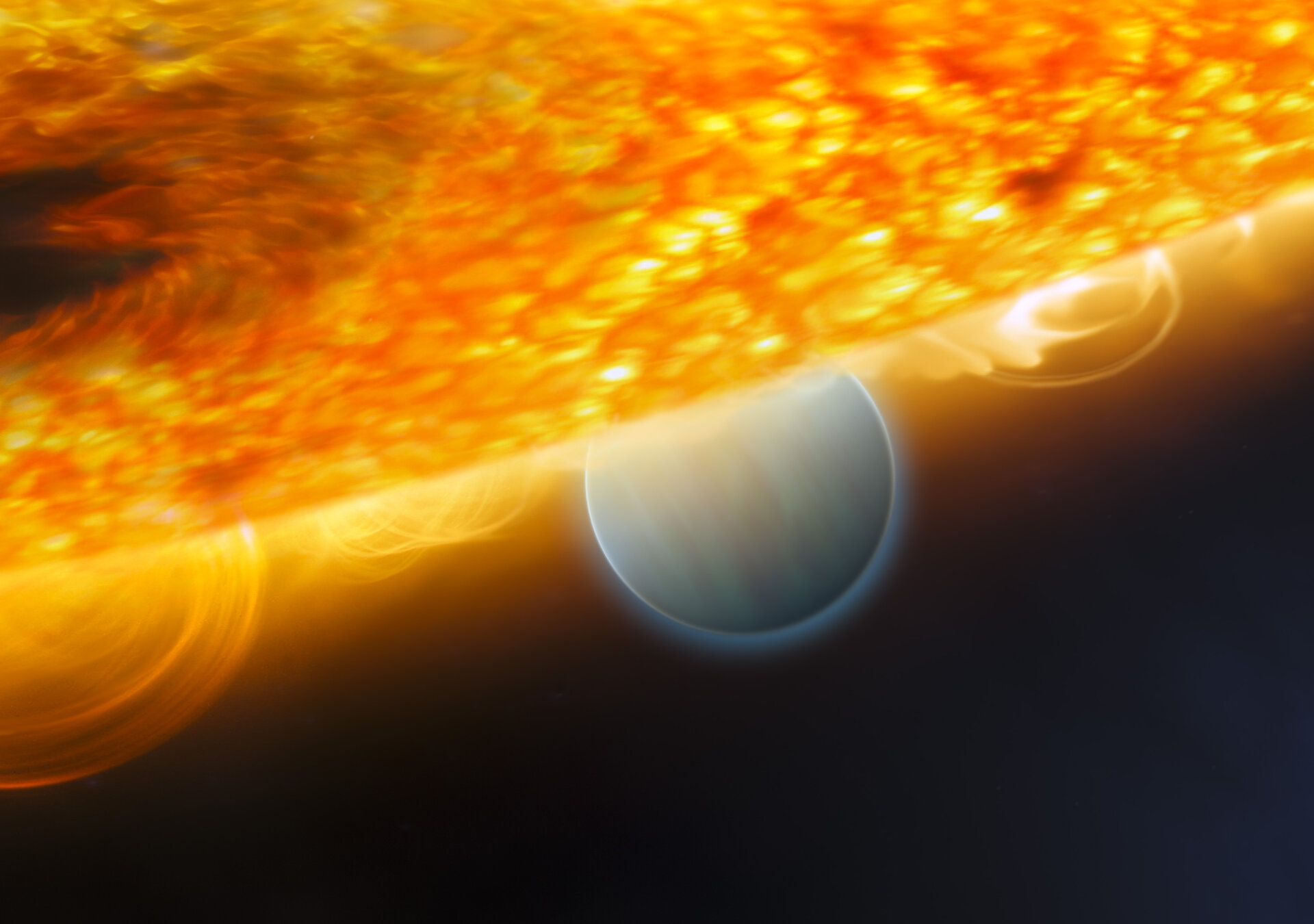 The NASA/ESA Hubble Space Telescope has discovered carbon dioxide in the atmosphere of a planet orbiting another star. This is an important step in finding the chemical biotracers of life as we know it on other worlds.

The Jupiter-sized planet, called HD 189733b, is too hot for life. But new Hubble observations prove that the basic chemistry for life can be measured on planets orbiting other stars. Organic compounds can also be a by-product of life processes and their detection on an Earth-like planet may someday provide the first evidence for life beyond Earth.

Previous observations of HD 189733b by Hubble and the Spitzer Space Telescope found water vapour. Earlier this year Hubble found methane in the planet’s atmosphere.

"This is exciting because Hubble is allowing us to see molecules and to probe the conditions, chemistry, and composition of atmospheres on other planets," says researcher Mark Swain of the Jet Propulsion Laboratory in Pasadena, USA. "Thanks to Hubble, we're entering an era where we are rapidly going to expand the number of molecules we know about on other planets."

An international team of astronomers used Hubble's Near Infrared Camera and Multi-Object Spectrometer (NICMOS) to study infrared light emitted from the planet, which lies 63 light-years away. Gases in the planet's atmosphere absorb certain wavelengths of light from the planet's hot glowing interior. The team identified not only carbon dioxide, but also carbon monoxide. The molecules leave their own unique spectral fingerprint on the radiation from the planet that reaches Earth. This is the first time a near-infrared emission spectrum has been obtained for an extrasolar planet.

"The carbon dioxide is the main focus of the excitement, because that is a molecule that under the right circumstances could have a connection to biological activity, as it does on Earth," Swain says. "The very fact that we're able to detect it, and estimate its abundance, is significant for the long-term effort of characterizing planets both to find out what they’re made of and to find out if they could be a possible host for life."

...carbon dioxide is the main focus of the excitement, because ... under the right circumstances (it) could have a connection to biological activity

This type of observation is best done for planets with orbits tilted edge-on towards Earth. They routinely pass in front of and then behind their parent stars, phenomena known as eclipses. The planet HD 189733b passes behind its companion star once every 2.2 days. This allows an opportunity to subtract the light of the star alone (when the planet is blocked) from that of the star and planet together prior to eclipse), thus isolating the emission of the planet alone and making a chemical analysis of its day-side atmosphere possible.

In this way, Swain is using the eclipse of the planet behind the star to probe the planet's day side, which contains the hottest portions of its atmosphere. "We're starting to find the molecules and to figure out how many of them there are to see the changes between the day side and the night side," says Swain.

This successful demonstration of looking at near-infrared light emitted from a planet is very encouraging for astronomers planning to use the NASA/ESA/CSA James Webb Space Telescope when it is launched in 2013. Biomarker molecules are best seen at near-infrared wavelengths.

Astronomers look forward to using JWST to spectroscopically look for biomarkers on a terrestrial planet the size of Earth, or a super-Earth several times our planet's mass. Swain and colleagues now plan to search for biomarker molecules in the atmospheres of other extrasolar planets to try. He also plans to use these molecules to study changes that may occur in extrasolar planet atmospheres to learn something about the weather on these distant worlds.

Co-researcher Giovanna Tinetti from University College London adds: "In the terrestrial planets of our solar system, carbon dioxide plays a crucial role for the stability of climate. On Earth, carbon dioxide is one of the ingredients of photosynthesis and a key element in the carbon cycle. Our observations represent a great opportunity to understand the role of carbon dioxide in the atmospheres of hot Jupiter-type planets".

The Hubble Space Telescope is an international cooperative project between ESA and NASA.