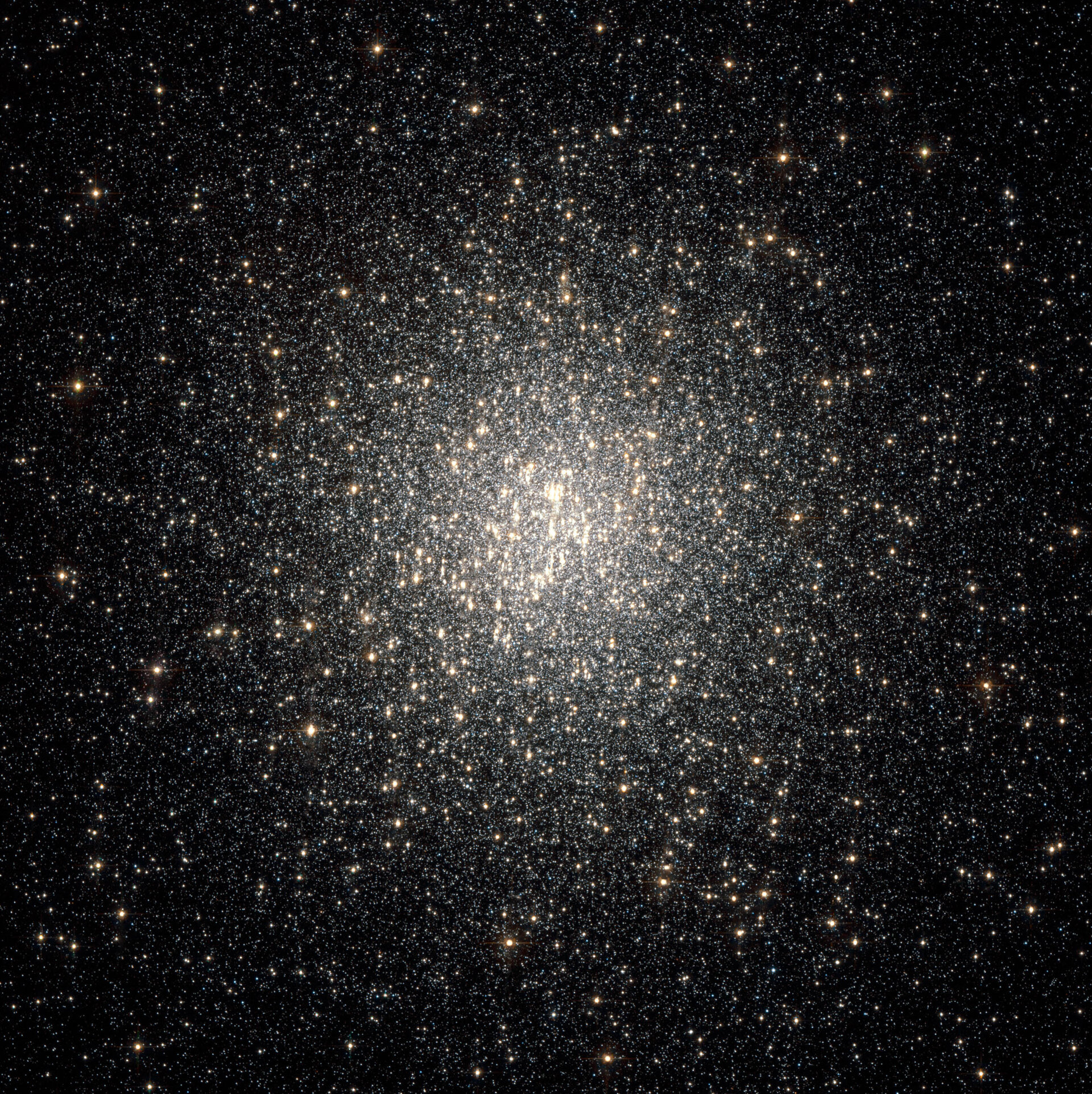 Hubble’s observations of the massive globular cluster NGC 2808 provide evidence for three generations of stars that formed early in its life. This is a major upset for conventional theories that propose a single period of star birth.

Globular clusters contain hundreds of thousands of stars held together tightly by gravity. They are among the earliest settlers of the Milky Way, born during our Galaxy’s formation. NGC 2808 has two to three times more mass than a typical globular cluster. Of the about 150 known globular clusters in our Milky Way, it is one of the largest, containing more than 1 million stars

“The generally accepted view is that all of its stars originated at the same time and place, from the same material and have co-evolved for billions of years,” said team member Luigi Bedin of the European Southern Observatory in Garching, Germany.

“This is the cornerstone on which much of the study of stellar populations has been built. So we were very surprised to find several distinct populations of stars in NGC 2808."

The analysed data provides evidence that the cluster gave rise to three generations early in its life. Several distinct populations of stars were found, born within 200 million years- very early in the life of the 12.5 thousand million year old cluster.

“We had never imagined that anything like this could happen,” said Giampaolo Piotto of the University of Padua in Italy, leader of the team that made the discovery.

Such a finding, so close to home has deep cosmological implications. "We need to solve the puzzle to understand how stars formed in distant galaxies in our early Universe," Piotto explained.

“One assumption is that the amount of helium increases with each generation of stars.” said team member Ivan King of the University of Washington in Seattle, USA. “With each stellar generation appearing slightly bluer, the colour of the stellar populations indicates that the amount of helium increases in each generation. Perhaps massive star clusters like NGC 2808 hold onto enough gas to ignite a rapid succession of stars.”

Star birth would be driven by shock waves from supernovae and stellar wind from red giants, which compress the gas and makes new stars, King explained. The gas would be increasingly enriched in helium from previous generations of stars more massive than the Sun.

Astronomers generally believed that globular clusters produce only one generation of stars. This is because the energy radiating from the first batch would clear out most of the residual gas needed to make more stars. But NGC 2808, being more massive than a typical cluster, may have had sufficient gravity to hold onto enough gas. This gas may then have been enriched by helium from the first stars.

Another possible explanation for the multiple stellar populations is that NGC 2808 may only be masquerading as a globular cluster. The stellar grouping may have been a dwarf galaxy that was stripped of most of its material due to gravitational capture by the Milky Way.

Omega Centauri, the first globular cluster found by Piotto’s group containing multiple generations of stars, is suspected to be the remnant core of a dwarf galaxy, Bedin said.

Although the astronomers have looked into only two globular clusters for multiple stellar populations, they say this may be a typical occurrence in other massive clusters.

“No one is suggesting that previous work on other clusters is no longer valid,” said King, “but this discovery shows that the study of stellar populations in globular clusters has now taken a new turn.”

The team plans to use ESO’s Very Large Telescope in Chile to make spectroscopic observations of the chemical abundances in NGC 2808, which may offer further evidence that the stars were born at different times and yield clues to how they formed. They will also use Hubble to hunt for multiple generations of stars in about 10 more massive globular clusters.

These results have been accepted for publication in the paper "A Triple Main Sequence in the Globular Cluster NGC 2808" by Piotto et al. on 20 May 2007 in the Astrophysical Journal Letters.