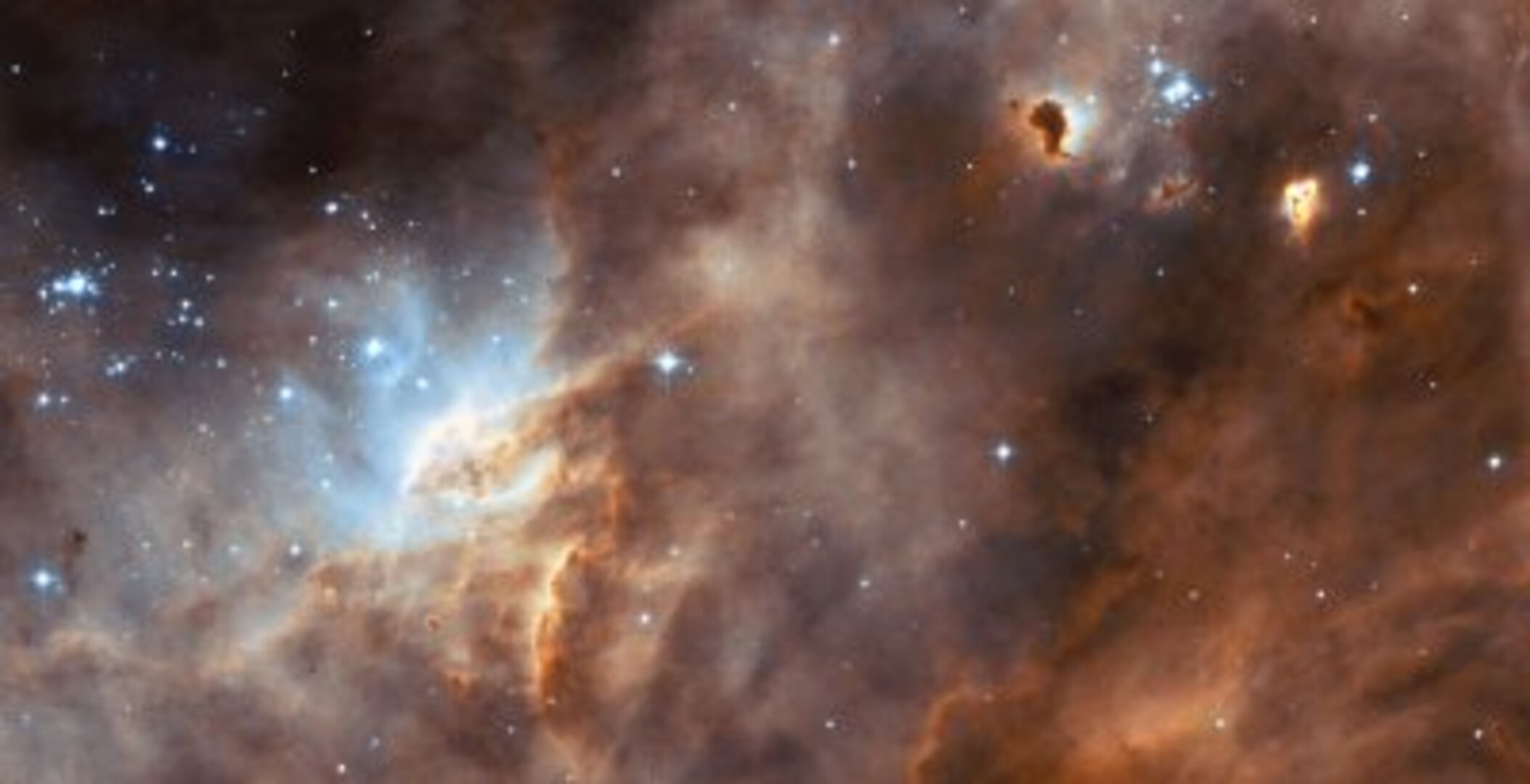 The NASA/ESA Hubble Space Telescope captures the iridescent tapestry of star birth in a neighbouring galaxy in this panoramic view of glowing gas, dark dust clouds and young, hot stars.

The star-forming region, catalogued as N11B lies in the Large Magellanic Cloud (LMC), located only 160 000 light-years from Earth. With its high resolution, the Hubble Space Telescope is able to view details of star formation in the LMC as easily as ground-based telescopes are able to observe stellar formation within our own Milky Way galaxy.

One neighbouring galaxy, the Large Magellanic Cloud (LMC), lies in the constellation of Dorado and contains a number of regions harbouring recent and ongoing star formation. One of these star-forming regions, N11B, is shown in this Hubble image. It is a subregion within a larger area of star formation called N11. N11 is the second largest star-forming region in LMC. It is only surpassed in the size and activity by ‘the king of stellar nurseries’, the Tarantula nebula (or 30 Doradus), located at the opposite side of LMC.

The image illustrates a perfect example of so-called sequential star formation in a nearby galaxy - new starbirth triggered by old massive stars. The sequence begins with a cluster of stars outside the top of the Hubble image which led to the birth of the collection of blue- and white-coloured stars near the left of this new Hubble image. These stars are among the most massive stars known anywhere in the Universe. The region around the hot stars is relatively clear of gas, because the stellar winds and radiation from the stars have pushed the gas away. When this gas collides with and compresses surrounding dense clouds, the clouds can collapse under their own gravity and start to form new stars. This chain of consecutive star birth episodes has been seen in more distant galaxies, but it is shown very clearly in this Hubble image.

Farther to the right of the image, along the top edge, are several smaller dark clouds, or globules, of interstellar dust with odd and intriguing shapes. They are seen silhouetted against the glowing interstellar gas. Several of these dark globules are bright-rimmed because they are illuminated and are being evaporated by radiation from neighbouring hot stars. A generation of new stars is now being born inside these globules.

In N11 altogether, three generations of stars can be found. ‘Grandmother’ stars (outside the Hubble image) that have carved a large superbubble, leading to the birth of the cluster of massive blue-white ‘mother’ stars seen near the top of this image. These in turn gives birth to new star ‘babies’ inside the dark globules.

This image was taken with Hubble's Wide Field Planetary Camera 2 using filters that isolate light emitted by oxygen (a 1200 second exposure) and hydrogen gas (a 1000 seconds exposure). The science team, led by astronomers You-Hua Chu (University of Illinois) and Yäel Nazé (Universite de Liège, Belgium) are comparing these images of N11B, taken in 1999, with similar regions elsewhere in the LMC. This colour rendition was co-produced and is being co-released by the Hubble European Space Agency Information Centre and the Hubble Heritage Team (STScI).