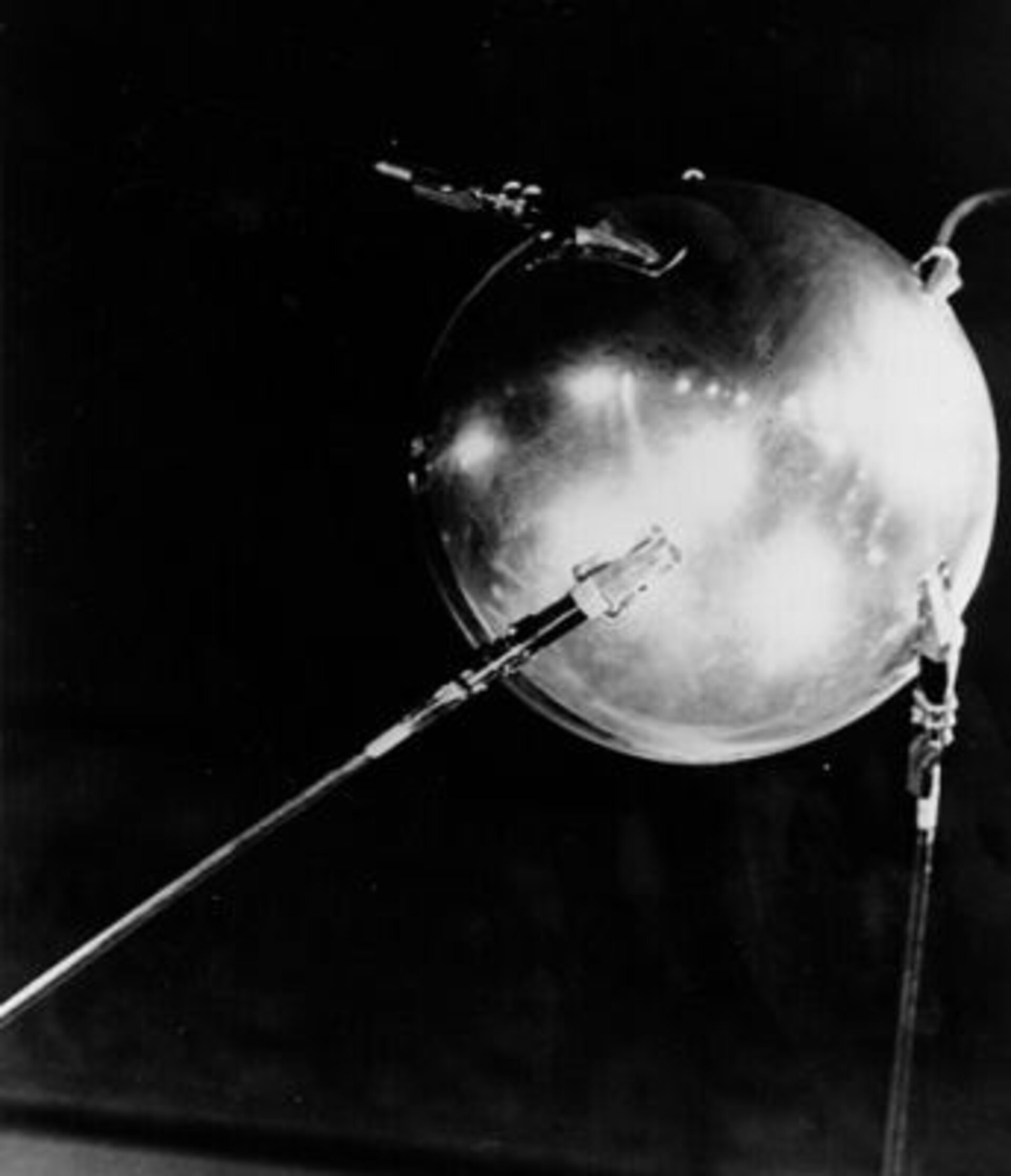 At 22:28 hours Moscow time, on 4 October 1957, the space age began with the launch of the first artificial satellite into orbit around the Earth. The name of the satellite was Sputnik, Russian for fellow traveller.

This historic satellite was launched from the Baikonur Cosmodrome in Kazakhstan, where ESA’s Integral satellite is scheduled to be launched 10 days from now.

The name of the satellite was Sputnik, Russian for fellow traveller. This historic satellite was launched from the Baikonur Cosmodrome in Kazakhstan, where ESA’s Integral satellite is scheduled to be launched 10 days from now.

Sputnik 1 was very unsophisticated, particularly compared to Integral. In appearance small round and spiky, it was an 83 kg aluminium sphere with a diameter of 58 centimetres and with four antennas, each nearly 3 metres long. On board were two radio transmitters on 20.005 and 40.002 MegaHertz and silver-zinc batteries, sufficient to provide one watt of power for up to three weeks.

An R-7 rocket was used to launch Sputnik, which was built as quickly as possible by Soviet scientist Sergei Korolyov and his team, in order to beat the USA into space. Launched into orbit at an inclination of 65.1 degrees, its orbit took it from a low or perigee of 228 km from the Earth to a high point or apogee of 947 km. The first orbit of the Earth by an artificial satellite took 96 minutes 10.2 seconds.

Once in orbit Sputnik began to transmit the first message received from space; although only a simple beep … beep … beep, this marked the beginning of space exploration.

This historic moment was marked in the town of Baikonur with a festival, complete with parades and a rock concert. The celebrations were complete when it was announced that the Russian Government will renew its lease of Baikonur from the Kazakh authorities for another 50 years.

At 17:15 Baikonur time, ESA and Alenia staff members bid farewell to their long-time friend, the Integral satellite, as it disappeared between the two halves of the Proton fairing.

Following the removal of the last remove-before-flight item, and visual inspection, the combined upper stage and satellite was raised just enough to allow Khrunichev personnel to place a load-bearing support underneath the upper stage. Once the support was adjusted into place, the bottom half of the fairing was slowly slid underneath Integral.

Great care was taken to make sure that static clearance between Integral and the fairing was acceptable. No problems were identified and finally the fairing was secured to the fourth stage.

In record time, the upper half of the fairing was craned into position and lowered into place. Soon afterwards Khrunichev personnel began fastening the two halves together, and adjusting the mechanical and pyrotechnic devices that will open the fairing once in space. This combination of Proton 4th stage, Proton adapter, satellite separation system, satellite and fairing is referred to as the Space Head Unit or SHU for short.

Once finalized, the SHU will be transported to Proton Facility 92-1 where it will be attached to the rocket.

At approximately 16:05 Baikonur time the Integral project reached another milestone as the Proton 4th stage was successfully rotated into the horizontal position.

There are now very few activities remaining on the satellite itself. In the next few hours, all 'remove before flight' items will be taken off and final checks of the clampband, that keeps the satellite fixed to the upper stage, will be carried out. Then, after tests by Khrunichev and Energia, the whole assembly will be positionned on a cradle aboard a train and transported to building 92-1 for mating with the rest of the Proton Rocket.

Once installed on the Proton, a new set of electrical checks and battery maintenance will be carried out before the final rollout to the pad.

The Integral team is proud to report that on 30 September, the Integral spacecraft was lifted and smoothly transferred to the top of the Proton fourth stage, known as Block DM.

Activities started at 10:00 with a final briefing between the Russian and the Integral team. The crane carried the spacecraft across the integration hall, lifted it above the Block DM and gently lowered it on top of the interface ring. By noon, all operations were completed, to the whole satisfaction of the team.

By noon, all operations were completed, to the whole satisfaction of the team.