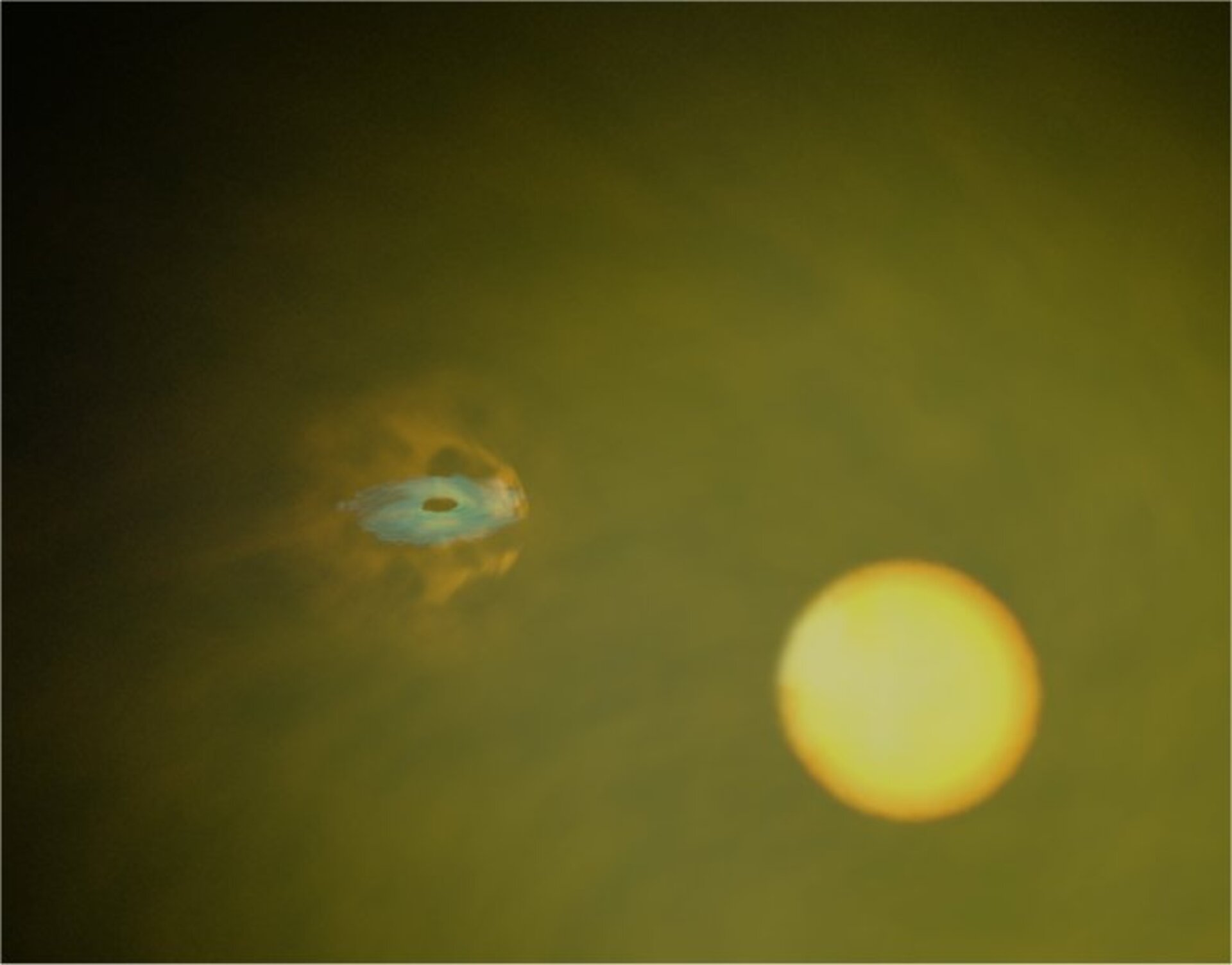 Integral, ESA's powerful gamma-ray space telescope, has discovered what seems to be a new class of astronomical objects.

These are binary systems, probably including a black hole or a neutron star, embedded in a thick cocoon of cold gas. They have remained invisible so far to all other telescopes. Integral was launched one year ago to study the most energetic phenomena in the universe.

Integral detected the first of these objects, called , on 29 January 2003. Although astronomers did not know its distance, they were sure it was in our Galaxy. Also, after some analysis, researchers concluded that the new object could be a binary system comprising a compact object, such as a neutron star or a black hole, and a very massive companion star.

When gas from the companion star is accelerated and swallowed by the more compact object, energy is released at all wavelengths, from the gamma rays through to visible and infrared light. About 300 binary systems like those are known to exist in our galactic neighbourhood and could simply have been one more. But something did not fit: why this particular object had not been discovered so far?

Astronomers, who have been observing the object regularly, guess that it had remained invisible because there must be a very thick shell of obscuring material surrounding it. If that was the case, only the most energetic radiation from the object could get through the shell; less-energetic radiation would be blocked. That could explain why space telescopes that are sensitive only to low-energy radiation had overlooked the object, while Integral, specialised in detecting very energetic emissions, did see it.

To test their theory, astronomers turned to ESA's XMM-Newton space observatory, which observes the sky in the X-ray wavelengths. As well as being sensitive to high-energy radiation, XMM-Newton is also able to check for the presence of obscuring material. Indeed, XMM-Newton detected this object last February, as well as the existence of a dense 'cocoon' of cold gas with a diameter of similar size to that of the Earth's orbit around the Sun.

This obscuring material forming the cocoon is probably 'stellar wind', namely gas ejected by the supermassive companion star. Astronomers think that this gas may be accreted by the compact black hole, forming a dense shell around it. This obscuring cloud traps most of the energy produced inside it.

The main author of these results, Roland Walter of the Integral Science Data Centre, Switzerland, explained: "Only photons with the highest energies [above 10 keV] could escape from that cocoon. has therefore not been detected by surveys performed at lower energies, nor by previous gamma-ray missions that were much less sensitive than Integral."

The question now is to find out how many of these objects lurk in the Galaxy. XMM-Newton and Integral together are the perfect tools to do the job. They have already discovered two more new sources embedded in obscuring material. Future observations are planned.

The paper explaining these results will be published in November in a special issue of Astronomy and Astrophysics dedicated to Integral, on the occasion of its first anniversary.

Integral
The International Gamma Ray Astrophysics Laboratory (Integral) is the first space observatory that can simultaneously observe celestial objects in gamma rays, X-rays and visible light. Integral was launched on a Russian Proton rocket on 17 October 2002 into a highly elliptical orbit around Earth. Its principal targets include regions of the galaxy where chemical elements are being produced and compact objects, such as black holes.

XMM-Newton
XMM-Newton can detect more X-ray sources than any previous satellite and is helping to solve many cosmic mysteries of the violent Universe, from black holes to the formation of galaxies. It was launched on 10 December 1999, using an Ariane-5 rocket from French Guiana. It is expected to return data for a decade. XMM-Newton's high-tech design uses over 170 wafer-thin cylindrical mirrors spread over three telescopes. Its orbit takes it almost a third of the way to the Moon, so that astronomers can enjoy long, uninterrupted views of celestial objects.