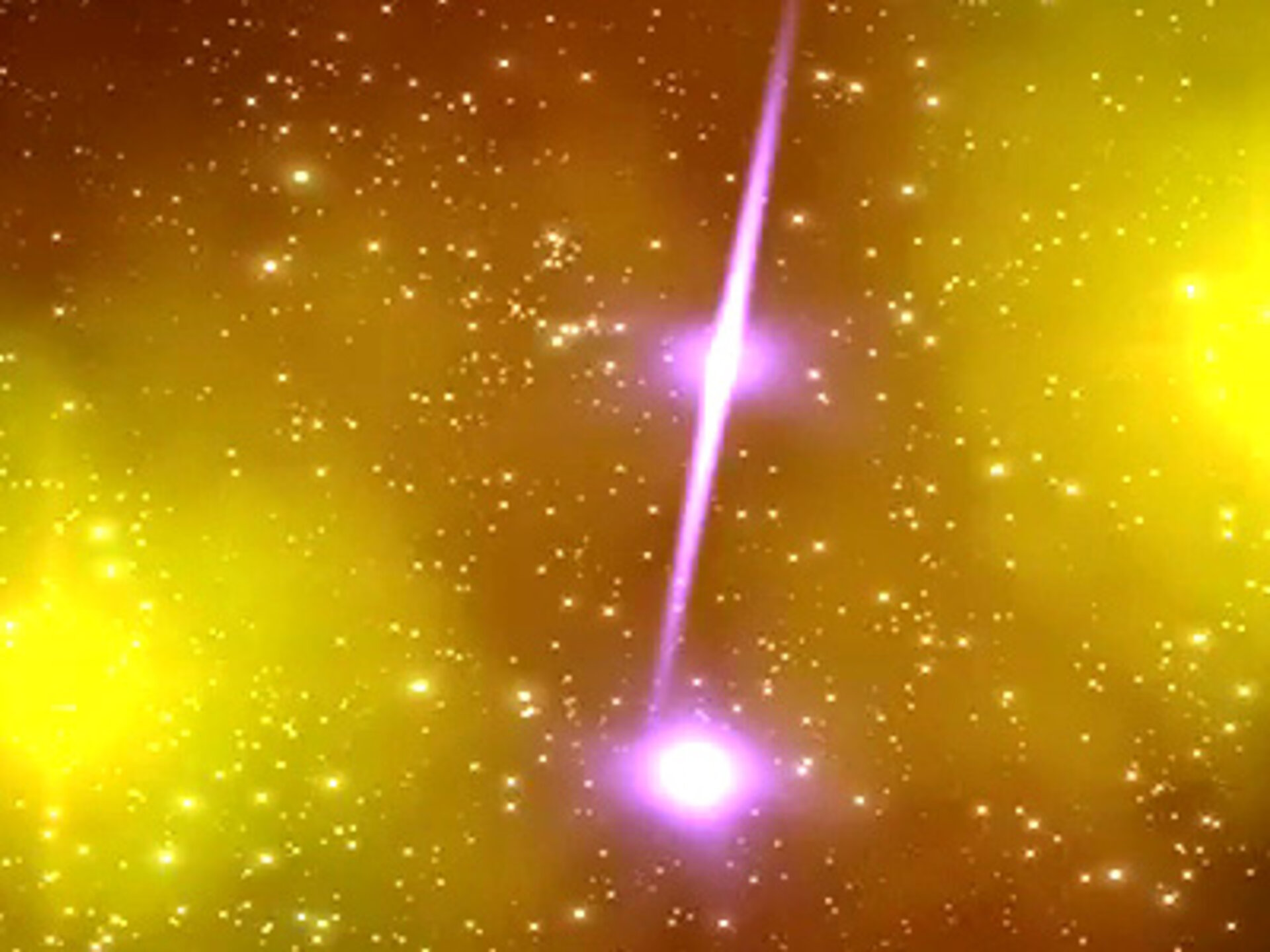 ESA’s Integral has made the first unambiguous discovery of high-energy X-rays coming from a rare massive star at our cosmic doorstep, Eta Carinae. It is one of the most violent places in the galaxy, producing vast winds of electrically-charged particles colliding at speeds of thousands of kilometres per second.

The only astronomical object that emits gamma-rays and is observable by the naked eye, Eta Carinae is monstrously large, so large that astronomers call it a hypergiant. It contains between 100–150 times the mass of the Sun and glows more brightly than four million Suns put together. Astronomers know that it is not a single star, but a binary, with a second massive star orbiting the first.

“The intensity of the X-rays is a little lower than we expected, but given that this is the first-ever conclusive observation, that’s okay,” says Jean-Christophe Leyder of the Institut d’Astrophysique et de Géophysique, Université de Liège, Belgium.

The high-energy X-rays come from a vast shockwave, set up and maintained between the two massive stars. The shockwave is produced when the two stars’ stellar winds collide, creating a system that astronomers term a colliding-wind binary. Massive stars are constantly shedding particles that are ‘blown’ away into space by the effect of light and other radiation given off by the star.

This starlight is so fierce that the stellar winds can reach speeds of 1500–2000 km/s. With two massive stars in close proximity, as they are in the Eta Carinae system, the winds collide and set up fearsome shockwaves where temperatures reach several thousand million degrees Kelvin. “It’s a very tough environment,” says Leyder.

Electrically-charged particles called electrons get caught in the magnetic environment of the shockwaves, bouncing back and forth and being accelerated to huge energies. When they finally burst out of the shockwave, they collide with low-frequency photons and give them more energy, creating the emission that Integral has seen.

Understanding this emission is important because astronomers believe that it lies at the heart of many diverse phenomena in the universe. Stellar winds have profound implications on the evolution of stars, the chemical evolution of the universe and as a source of energy in the galaxy.

Massive stars are rare, so two in a binary system is even rarer. “In our galaxy, there are probably only 30-50 colliding-wind binaries that display a clear signature of wind-wind collision,” says Leyder. A year ago, ESA’s XMM-Newton saw X-rays from the colliding wind binary, HD 5980, situated in the neighbouring galaxy, the Small Magellanic Cloud.

Integral covers a different, higher energy range in X-rays than that covered by XMM-Newton. This is why it was able to detect the more energetic X-rays emitted by Eta Carinae. Based on observations, scientists have learnt that the Eta Carinae system loses one Earth mass per day, which is roughly 140 times higher than the mass loss rate in HD 5980.

To have a rare, massive binary star such as Eta Carinae virtually at our cosmic doorstep at 8000 light-years, close enough to be observable in detail, is a stroke of luck. Now that they know what to look for, astronomers will continue searching for other examples of colliding wind binaries emitting high-energy X-rays further afield.

‘Hard X-ray Emission from Eta Carinae’ by J-C. Leyder, R. Walter and G. Rauw has been accepted for publication in the journal Astronomy and Astrophysics.