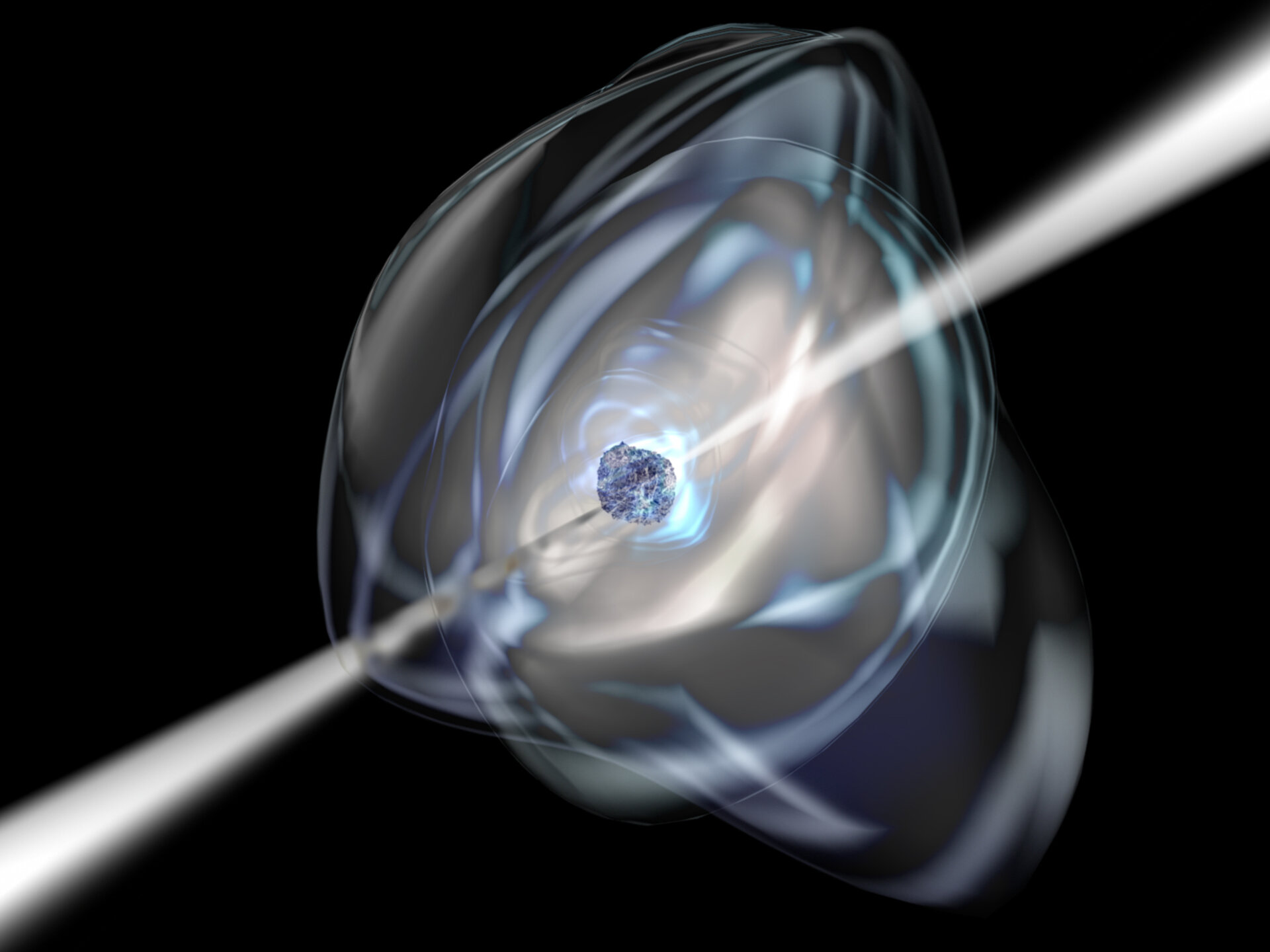 This discovery links these objects to the most magnetically active bodies in the Universe and forces scientists to reconsider just how dead such stellar corpses really are.

Known as anomalous X-ray pulsars (AXPs), the stellar corpses were first spotted pulsing low-energy X-rays into space during the 1970s by the Uhuru X-ray satellite. AXPs are extremely rare with only seven known to exist. The X-rays were first thought to be produced by matter falling from a companion star onto the AXP.

An alternative was that each AXP is the spinning core of a dead star, known as a neutron star, sweeping beams of energy through space like a cosmic lighthouse. When these beams cross Earth’s line of sight, the AXP blinks on and off.

However, this scenario required the AXP’s magnetic field to be a thousand million times stronger than the strongest steady magnetic field achievable in a laboratory on Earth. Nevertheless, the Integral observations show that the magnetic solution is correct.

The newly detected emission, known to astronomers as a ‘hard tail’, of high-energy (‘hard’) X-rays and gamma rays also comes in the form of regular pulses every 6–12 seconds depending upon which AXP is observed.

Discovered in three of the four AXPs studied, the hard tails have a distinctive energy signature that forces astronomers to consider that they are produced by super-strong magnetic fields.

"The amount of energy in the hard tail is ten to almost one thousand times more than can be explained by a kind of magnetic friction between the spinning AXP and surrounding space," said Wim Hermsen of SRON, the Netherlands Institute for Space Research, Utrecht, who together with SRON colleagues made the observations. This leaves so-called 'magnetic field decay' as the only viable alternative.

Neutron stars with super-strong magnetic fields are dubbed ‘magnetars’. Created from the core of a gigantic star that has exploded at the end of its life, each magnetar is only around 15 kilometres in diameter yet contains more than one and a half times the mass of the Sun.

Magnetars are also responsible for the ‘soft gamma-ray repeaters’ (SGRs), which explosively release massive quantities of energy when catastrophic reorganisations of their magnetic fields spontaneously take place. The big difference between an SGR and an AXP is that the process is continuous rather than explosive in an AXP and less energetic.

"Somehow these objects are tapping the enormous magnetic energy contained beneath their surfaces and funnelling it into space," said Hermsen.

Exactly how that happens is the focus of future work. It is possible that SGRs, of which five are known, turn into AXPs once they have exploded enough of their energy into space.

All known AXPs except one are clustered towards the plane of our galaxy, the Milky Way, indicating that they are the result of recent stellar explosions; some are even wreathed in the exploded gaseous remnants of their former stars.

The other known AXP is in a satellite galaxy of the Milky Way. The hard tails were discovered by Integral serendipitously, thanks to its unique wide-field camera, the Imager on-Board Integral Satellite (IBIS).

"This is one of the things you hope for when you run an observatory like Integral," said Christoph Winkler, ESA’s Integral project scientist. As the AXPs prove, the stellar afterlife is more alive than astronomers once thought.

In this paper, the results are also based on data from NASA’s Rossi X-Ray Timing Explorer.