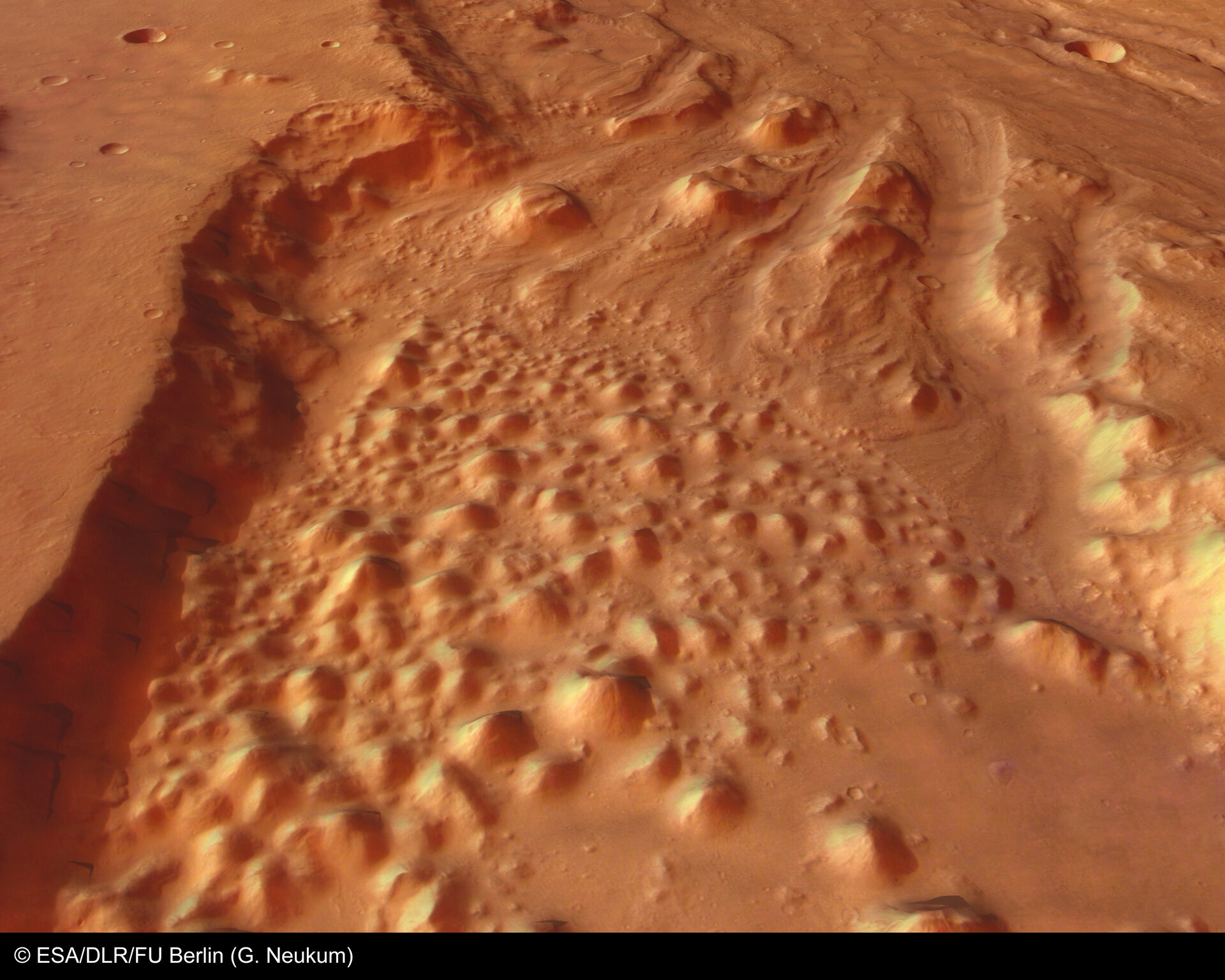 Image strips were taken during three orbits from an altitude of 350 km, with a resolution of 15 metres per pixel. The strips have then been matched to a mosaic that covers an area from 342.5º East to 3º North. The Iani Chaos depression – 180 km long and 200 km wide – is connected to the beginning of Ares Vallis by a 100-km wide transition zone.

From here, Ares Vallis continues its course for about 1400 km through the ancient Xanthe Terra highlands, bordered by valley flanks up to 2000 metres high. Eventually Ares Vallis empties into Chryse Planitia.

These images help illuminate the complex geological history of Mars. Ares Vallis is one of several big outflow channels on Mars in this region that formed thousands of millions of years ago. Many surface features suggest that erosion of large water flows had carved Ares Vallis in the Martian landscape.

Most likely gigantic floods ran downhill, carving a deep canyon into Xanthe Terra. Rocks eroded from the valley flanks were milled into smaller fractions and transported in the running water.

Finally this sedimentary load was deposited far north at the mouth of Ares Vallis in the Chryse plains, where NASA’s Mars Pathfinder landed in 1997 to search for traces of water with its small Sojourner rover.

The scenes displayed in the images show the transition zone between Iani Chaos and Ares Vallis. A chaotic distribution of individual blocks of rock and hills forms a disrupted pattern. These ‘knobs’ are several hundred metres high. Scientists suggest that they are remnants of a pre-existing landscape that collapsed after cavities had formed beneath the surface.

The elongated curvature of features extending from south to north along with terraces, streamlined 'islands' and the smooth, flat surface in the valley centre are strong hints that it was running water that carved the valley.

Ice stored in possible cavities in the Martian highlands might have been melted by volcanic heat. Pouring out, the melting water would have followed the pre-existing topography to the northern lowlands.

A hundred kilometres further north, a ten-kilometre-wide valley arm merges into Ares Vallis from the west. Large amounts of water originating from Aram Chaos (outside the image) joined the stream of Ares Vallis. Fan-shaped deposits on the valley floor are the remnants of landslides at the northern flanks.

At the freshly eroded cliffs, possible lava layers are visible: such layers are found almost everywhere in Xanthe Terra. Further downstream, another valley branch enters Ares Vallis from the east after passing through an eroded impact crater in Xanthe Terra. West of Ares Vallis, a more subtle riverbed is running parallel to the main valley.

The 3D image was processed from the nadir and one stereo channel. Image resolution have been reduced for use on the internet. The 'flyover' video is based on the digital terrain model from the stereo channels and the colour data.