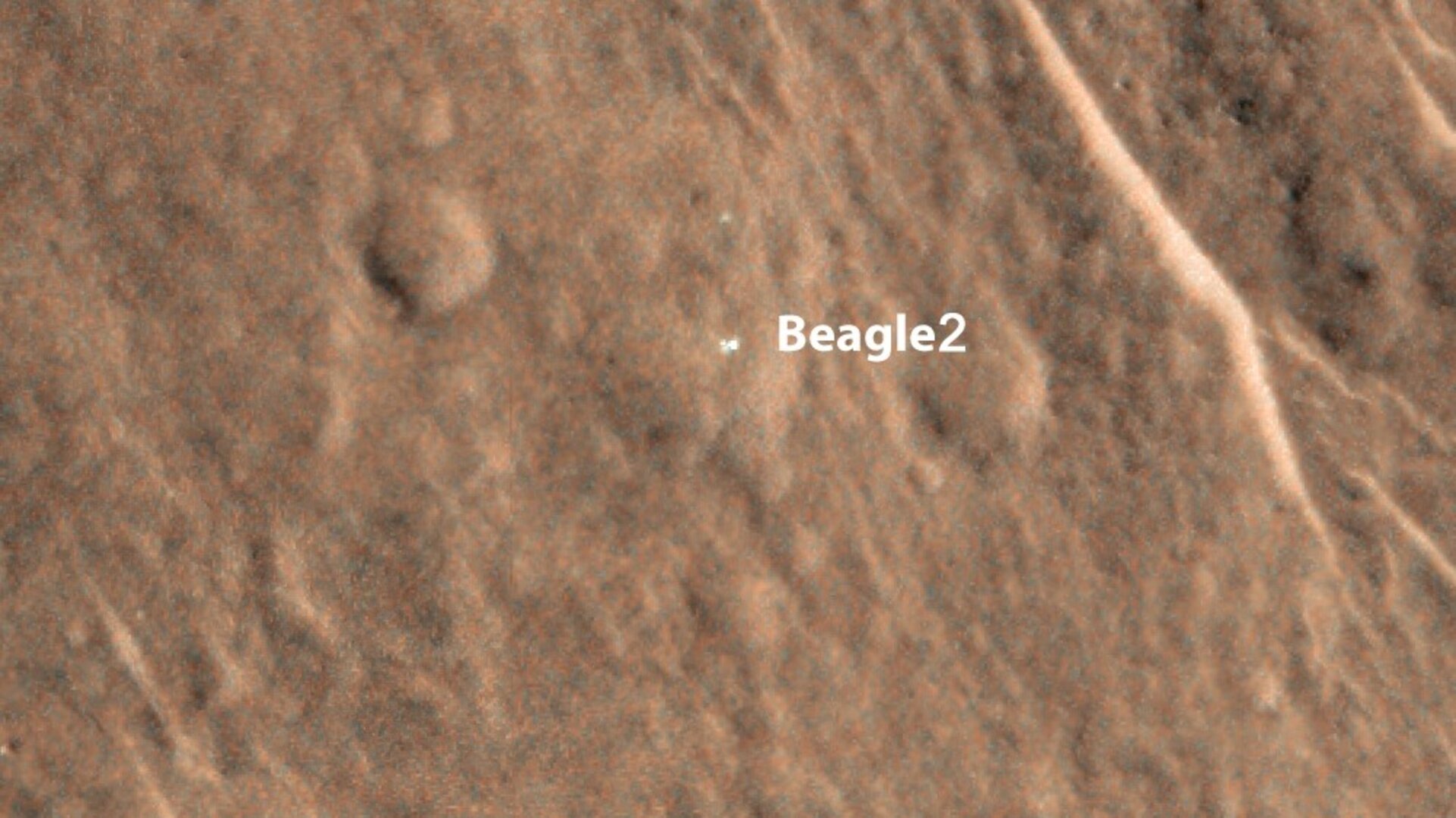 The UK-led Beagle-2 Mars lander, which hitched a ride on ESA’s Mars Express mission and was lost on Mars since 2003, has been found in images taken by a NASA orbiter at the Red Planet.

Beagle-2 was released from its mother craft on 19 December 2003 and was due to land six days later. But nothing was heard from the lander after its scheduled touchdown, and searches by Mars Express and NASA’s Mars Odyssey mission were fruitless.

Now, over a decade later, the lander has been identified in images taken by the high-resolution camera on NASA’s Mars Reconnaissance Orbiter. The lander is seen partially deployed on the surface, showing that the entry, descent and landing sequence worked and it did indeed successfully land on Mars on Christmas Day 2003.

“We are very happy to learn that Beagle-2 touched down on Mars. The dedication of the various teams in studying high-resolution images in order to find the lander is inspiring,” says Alvaro Giménez, ESA’s Director of Science and Robotic Exploration.

“Not knowing what happened to Beagle-2 remained a nagging worry. Understanding now that Beagle-2 made it all the way down to the surface is excellent news,” adds Rudolf Schmidt, ESA’s Mars Express project manager at the time.

The high resolution images were initially searched by Michael Croon, a former member of the Mars Express operations team at ESA’s Space Operations Centre, ESOC, in Darmstadt, Germany, working in parallel with members of the Beagle-2 industrial and scientific teams.

The small size of Beagle-2 – less than 2 m across when fully deployed – meant this was a painstaking endeavour, right at the limit of the resolution of cameras in orbit around Mars.

After the identification of potential counterparts to Beagle-2 in the expected landing of Isidis Planitia, a large impact basin close the martian equator, further images were obtained and analysed by the camera team, the Beagle-2 team and NASA’s Jet Propulsion Laboratory.

The images show the lander in what appears to be a partially deployed configuration, with only one, two or at most three of the four solar panels open, and with the main parachute and what is thought to be the rear cover with its pilot/drogue parachute still attached close by.

The size, shape, colour and separation of the features are consistent with Beagle-2 and its landing components, and lie within the expected landing area at a distance of about 5 km from its centre.

Possible features have also been speculatively identified for airbags, which cushioned the landing, and possibly for the front heatshield. Further imaging will be needed to confirm the latter targets.

The partial deployment explains why no signals were ever received from the lander: full deployment of all solar panels was needed to expose the radio antenna to transmit data and receive commands from Earth.

Unfortunately, given the partial deployment and covering of the antenna, there is no possibility of reviving Beagle-2 and recover data from it.

Nevertheless, knowing that Beagle-2 did after all land successfully on Mars adds renewed impetus to the next phase of Europe’s exploration of the Red Planet, with the launches of ESA’s ExoMars Trace Gas Orbiter and Entry, Descent and Landing Demonstrator in 2016 and the ExoMars rover in 2018.

For more information and reaction, see the UKSA news report.

Beagle-2 was the UK’s first mission to another planet. The project was a partnership between the Open University, the University of Leicester and EADS Astrium UK (now Airbus Defence and Space). Other funding partners included ESA, the Office of Science and Technology of the Department of Trade and Industry, the Particle Physics and Astronomy Research Council (PPARC), the Wellcome Trust, the National Space Centre and the Millennium Commission.

Professor Colin Pillinger from the Open University led the Beagle-2 project with inspirational enthusiasm; he died in May 2014. Professor George Fraser of the University of Leicester and Professor David Barnes of Aberystwyth University were also major contributors to Beagle-2, both of whom also died in 2014.