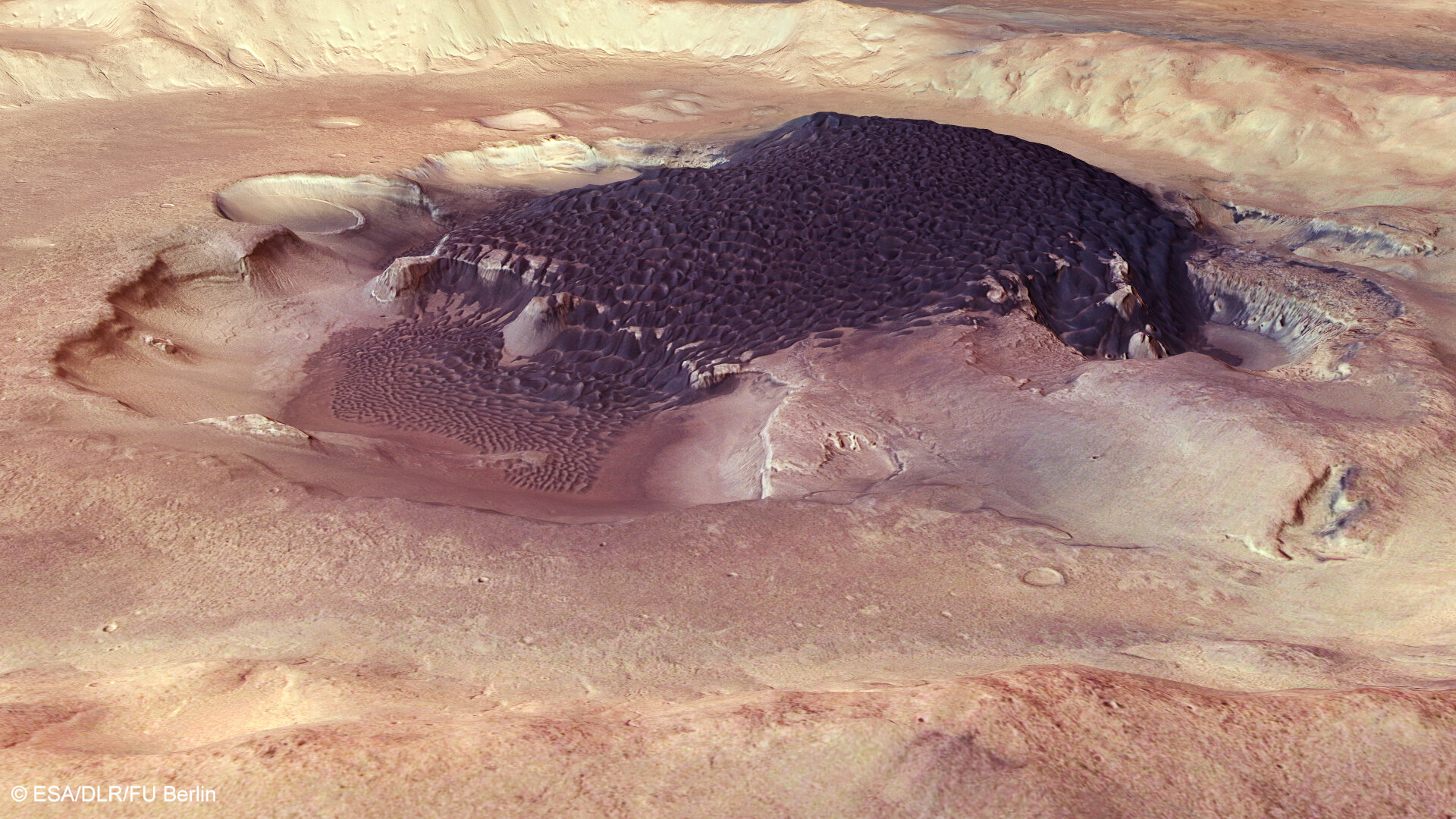 A new mosaic from ESA’s Mars Express shows a swirling field of dark dunes cascading into sunken pits within a large impact crater.

The mosaic was created from two images taken on 7 December 2005 and 9 January 2014, and focuses on the 108 km-wide Rabe crater. The region is 320 km to the west of the large Hellas impact basin, about halfway between the planet’s equator and south pole.

Wind-sculpted dunes and impact craters are common features on Mars but here we can see them combined, creating a stunning vista.

Rabe crater has an interesting topography: its flat floor has a number of smaller craters and large sunken pits within it. The bulk of the dune material sits atop the flat remnant of the original crater floor, but then some of it spills dramatically down into the pits below.

The dunes stand some 150-200 m tall and their swirling patterns indicate the prevailing direction of the winds that have whipped across the crater over time.

The dunes are made of basaltic material, a common volcanic rock that was deposited widely across Mars in the past. In the region shown here, it was subsequently covered over by other layers of material, uncovered by erosion within the crater itself.

Zooming in on the western (top in the main colour image) portion of the crater reveals distinct layers of dark material exposed in the crater walls. One possible interpretation is that the impact crater punched through the top surface to reveal these otherwise hidden layers. Over time, this material has been eroded and swept up by wind to form the dunes seen towards the centre of the crater.

Similar dark material can also be seen in several of the smaller craters surrounding Rabe, with streaks staining the surface in between, most notably in the left-hand side of the image above. It is possible that some of the dune material was lifted out of Rabe by strong winds and spread locally.

Other nearby craters look degraded, their once-distinct rims and internal features crumbling over time. This ‘terrain softening’ process is often associated with the presence of ice just below the surface: this can facilitate the slow and steady creep of material downslope, resulting in a smooth appearance.

Material deposited from the atmosphere, perhaps during sand storms, can also contribute to an apparent softening of features over time.

By contrast, one crater to the upper left of Rabe in the main colour, topography and 3D images shown here retains a sharper appearance. A closer examination of this relatively deep crater reveals fresh-looking channels and grooves in the crater walls.

Grooves like these are often associated with erosion by liquid water but, regardless of their formation history, they can also expose underlying layers, such as the dark material common to this region. Furthermore, a dense patch of this material is seen concentrated in the deepest part of the crater floor.

Impact craters like Rabe offer a window into the past by exposing ancient rocks that would otherwise remain hidden from view. Meanwhile, the dunes show the important continuing role played by wind in shaping the martian landscape.