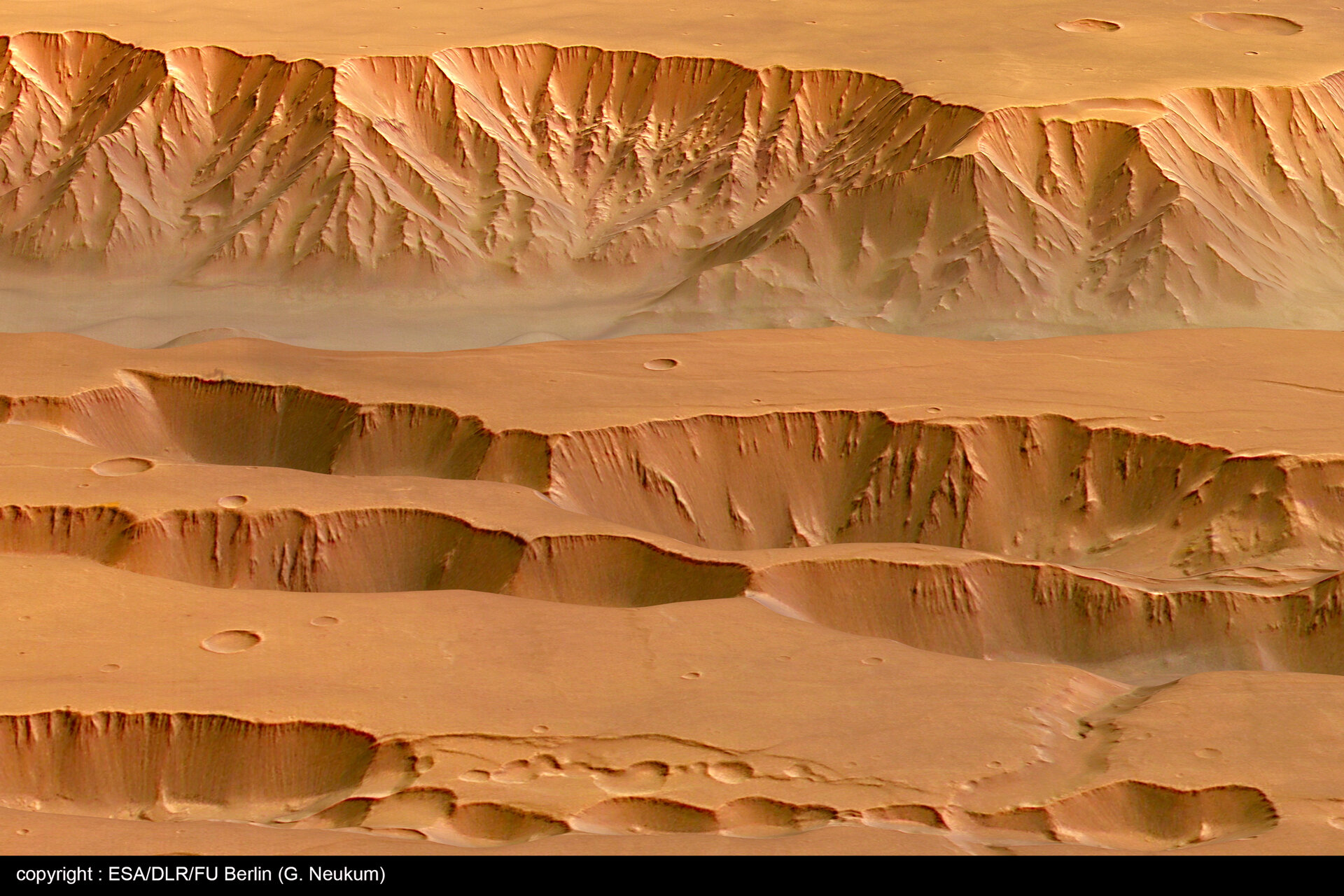 The HRSC obtained these images during orbit 449 with a ground resolution of approximately 48 metres per pixel.

The scenes show the region containing the sections of Coprates Chasma and Coprates Catena, over an area centred at about 13.5º South and 300º East, roughly in the centre of the Valles Marineris canyon system.

The trough of Coprates Chasma appears in the north (right-hand side) of the colour image here, and ranges from approximately 60 km to 100 km wide and extends 8-9 km below the surrounding plains.

Coprates Catena lies parallel to Coprates Chasma and can be seen in the south (left) of the image as three troughs, ranging from a few kilometres to 22 km wide and up to 5 km deep. These troughs have been modified by erosion, as indicated by the linear features extending from the upper edge of the trough walls.

In contrast to the relatively sharp appearance of the upper regions of the trough walls, the lower slopes and the floors of the troughs have a softer appearance, which is probably the result of atmospheric dust.

Linear features, prevalent throughout the image and running generally parallel to the major troughs, may be faults.

Scientists are unsure of the mechanism responsible for the creation of the Valles Marineris canyon system. Some suggest that the formation of the Tharsis uplift, located west of the canyon system, caused tension and fracturing of the Martian crust.

Other researchers believe that water may have removed rock material from the subsurface, which caused the surface to collapse. A related theory suggests that large quantities of subsurface ice melted, causing surface collapse. Possibly all of these processes together were active in forming the structure.

Valles Marineris provides scientists with a window into the depths of Mars and enables them to study the complex geological and climatic history of the Red Planet.

By supplying new data for Valles Marineris, including colour and stereo images, the Mars Express HRSC camera aids scientists in this endeavour, ultimately improving our understanding of this fascinating planet.

The 3D anaglyph images were created from the nadir channel and one of the stereo channels. Stereoscopic glasses are needed to view the 3D images Image resolution has been decreased for use on the internet.