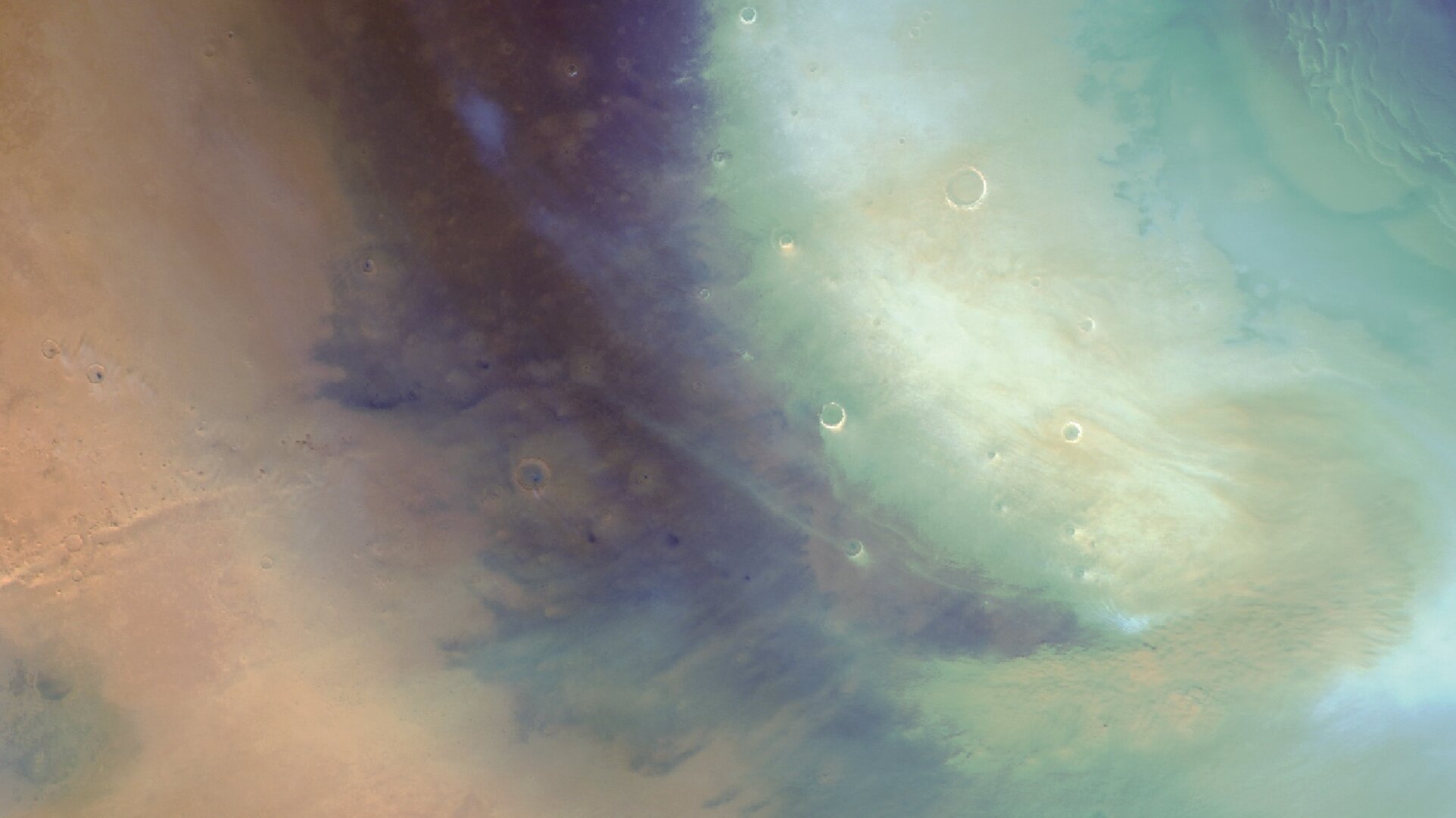 ESA’s Mars Express has been keeping an eye on local and regional dust storms brewing at the north pole of the Red Planet over the last month, watching as they disperse towards the equator.

Local and regional storms lasting for a few days or weeks and confined to a small area are common place on Mars, but at their most severe can engulf the entire planet, as experienced last year in a global storm that circled the planet for many months.

It is currently spring in the northern hemisphere of Mars, and water-ice clouds and small dust-lifting events are frequently observed along the edge of the seasonally retreating ice cap.

Many of the spacecraft at Mars return daily weather reports from orbit or from the surface, providing global and local impressions of the changing atmospheric conditions. ESA’s Mars Express observed at least eight different storms at the edge of the ice cap between 22 May and 10 June, which formed and dissipated very quickly, between one and three days.

The two cameras onboard the spacecraft, the High Resolution Stereo Camera (HRSC) and the Visual Monitoring Camera (VMC), have been monitoring the storms over the last weeks. The image at the top of this page, taken by HRSC on 26 May, captures a spiral-shaped dust storm, its brown colour contrasting against the white ice of the north polar ice cap below.

Meanwhile the animated sequence (above) was compiled from images of a different storm captured by the VMC over a period of 70 minutes on 29 May. This particular storm started on 28 May and continued to around 1 June, moving towards the equator during that time.

The montage of images (below) shows three different storms developing on 22 May, on 26 May, and between 6 and 10 June. In the latter case, the cameras watched the storm evolve for several days as it moved in an equatorward direction.

At the same time, wispy patches of light-coloured clouds can be seen at the outer margin of the polar cap and also several thousand kilometres away, close to the volcanoes Elysium Mons and Olympus Mons.

Together with the MARCI camera onboard NASA’s Mars Reconnaissance Orbiter, Mars Express observed that when the dust storms reached the large volcanoes, orographic clouds – water ice clouds driven by the influence of the volcano’s leeward slope on the air flow – that had previously been developing started to evaporate as a result of the air mass being heated by the influx of dust.

These regional dust storms only last a few days; the elevated dust is transported and spread out by global circulation into a thin haze in the lower atmosphere, around 20–40 km altitude. Some traces of dust and clouds remained in the volcanic province into mid-June.