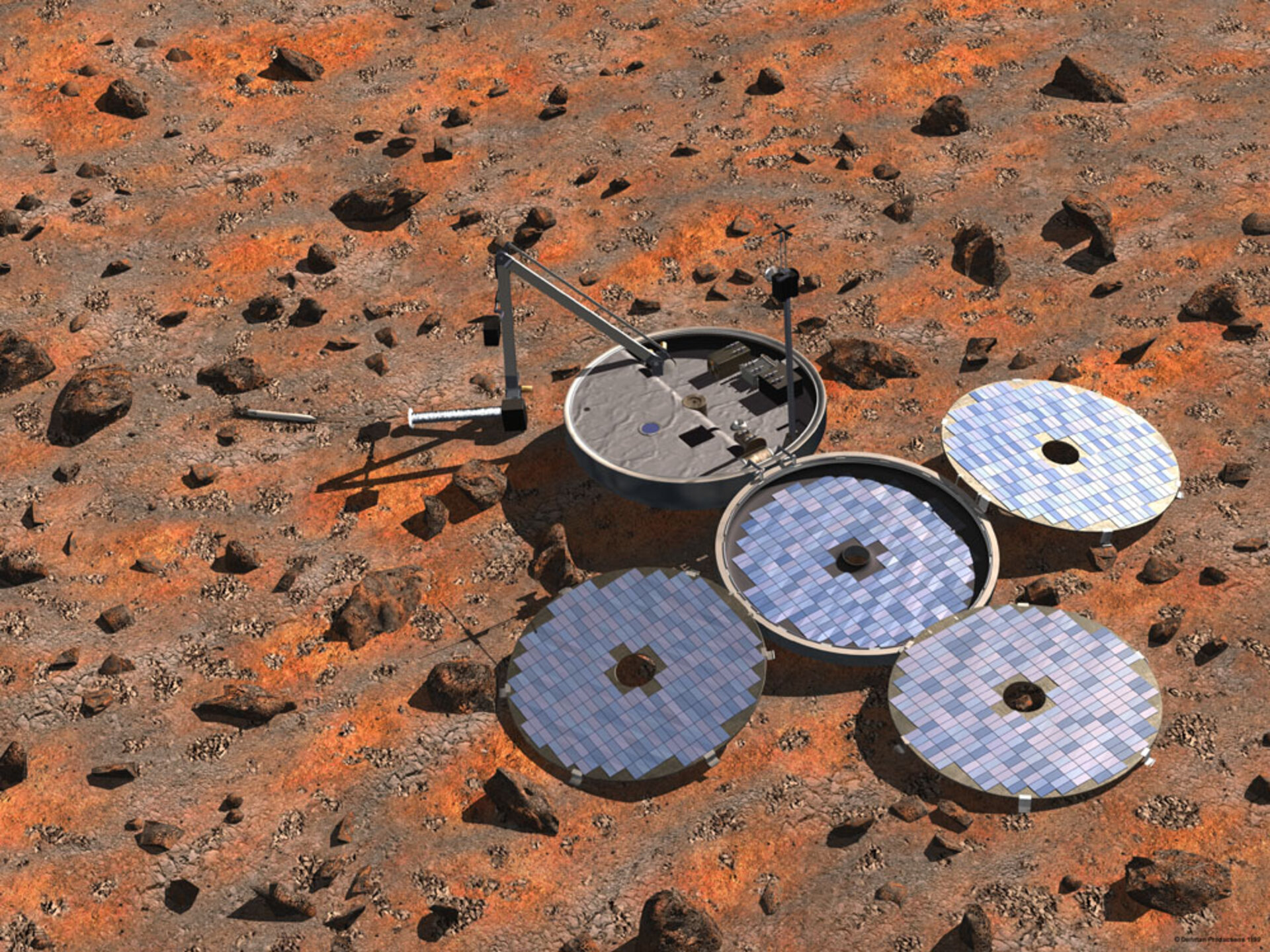 ESA PR 79-2003. ESA's Mars Express probe is scheduled to arrive at Mars at Christmas: the Beagle 2 lander is expected to touch down on the surface of the Red Planet during the night of 24 to 25 December.

Launched on 2 June 2003 from Baikonur (Kazakhstan) on board a Russian Soyuz operated by Starsem, the European probe - built for ESA by a European team of industrial companies led by Astrium - carries seven scientific instruments that will perform a series of remote sensing experiments designed to shed new light on the Martian atmosphere, the planet's structure and its geology. In particular, the British-made Beagle 2 lander will contribute to the search for traces of life on Mars through exobiology experiments and geochemistry research.

On board Mars Express tests have been run to check that the instruments are functioning correctly. Mars Express has successfully come through its first power test on the whole spacecraft after the gigantic solar flare on 28 October. Since 17 November the onboard software has been 'frozen' after several updates and the spacecraft is now quietly proceeding to its destination.

Before even entering into Martian orbit to perform its mission, Mars Express has to face another challenge: safely delivering the Beagle 2 lander to its destination. This task, starting on 19 December, will not be without risk.

First of all, to deliver the lander where planned, Mars Express has been put on a collision course with Mars, since Beagle 2 does not have a propulsion system of its own and must therefore be 'carried' precisely to its destination. This means that after separation, Mars Express has to veer away quickly to avoid crashing onto the planet.

During the cruise Beagle 2 will take its power from the mother spacecraft, Mars Express. After separation and until its solar arrays are fully deployed on the surface, Beagle 2 must rely on its own battery, which cannot last beyond 6 days. So, like a caring parent, Mars Express must release Beagle 2 at the last possible moment to ensure that the lander has enough power for the rest of its journey to the surface.

Only then can Mars Express change its orientation and rapidly fire the thrusters to get away from the collision course and enter into orbit around Mars. This will be the first time that an orbiter delivers a lander without its own propulsion onto a planet and attempts orbit insertion immediately afterwards.

Since all these manoeuvres are time-critical and allow little margin of error, the ground control team has had to simulate all possible scenarios (including glitches and problems, on board and on the ground) to make sure that nothing is left to chance.

The team has been training since September in a very realistic setting, using the same computers and equipment that will be employed during this mission phase. Although the real spacecraft cannot be directly involved, its behaviour is simulated via a sophisticated computer programme, using the actual flight software. These rehearsals, each lasting a day or more, cover all possible situations from the failure of an onboard instrument to the outbreak of a fire in the control room. One of these simulations will take place during the press conference on 3 December.

ESA's ground control team at ESOC, on the other hand, are having a very busy time. They are actively rehearsing responses to any situation that might arise when Mars Express releases Beagle 2 and enters into orbit around Mars. "The Mars Express mission is pushing the operations staff to extremes. Over the years, the experience acquired with experimental missions has provided a solid basis on which to prepare for the unexpected. The satellite controllers will rise to this new challenge", Gaele Winters, ESA Director of Technical and Operational Support, said.

Four media events have been scheduled relating to the arrival of Mars Express at its destination (see our press release N° 74-2003). The next event is scheduled on Wednesday 3 December at ESA/ESOC, Darmstadt, Germany and will possibly include the presentation of the first HRSC image and further information about scientific expectations of the mission. Several Principal Investigators will present their instruments and early results of testing and operations (see programme attached).

A videoconference of this ESA media briefing will be organised at ESA/Headquarters, Paris (F), ESA/ESTEC, Noordwijk (NL) and ESA/ESRIN, Frascati (I). Media wishing to attend are asked to complete the attached reply form and fax it to the Communication Office at the establishment of their choice.

Throughout December you can follow daily the countdown to arrival at Mars on the web at :http://mars.esa.int. Here you will find live streaming of key events, news, features, images, videos and more.