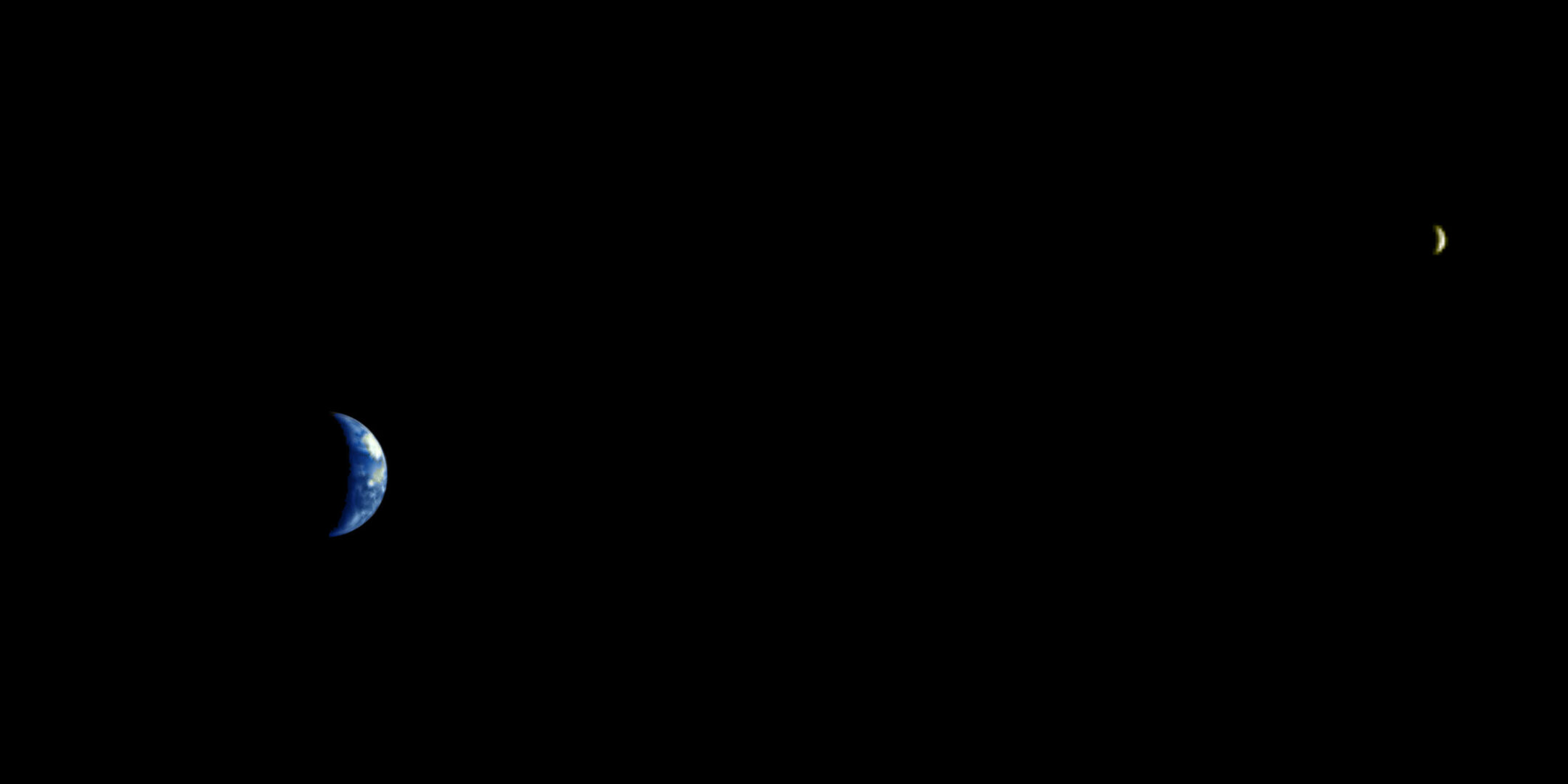 ESA PR 44-2003. A unique view of our home planet and its natural satellite – the Moon - is one of the first data sets coming from ESA's Mars Express.

“It is very good news for the mission,” says ESA's Mars Express Project Scientist, Agustin Chicarro. These and other data, such as those recording the major constituents of Earth as seen from space, are the actual proof that the instruments on board Mars Express, launched 2 June 2003, are working perfectly.

The routine check-outs of Mars Express's instruments and of the Beagle-2 lander, performed during the last weeks, have been very successful. "As in all space missions little problems have arisen, but they have been carefully evaluated and solved. Mars Express continues on its way to Mars performing beautifully", comments Chicarro.

The views of the Earth/Moon system were taken on 3 July 2003 by Mars Express's High Resolution Stereo Camera (HRSC), when the spacecraft was 8 million kilometres from Earth. The image taken shows true colours; the Pacific Ocean appears in blue, and the clouds near the Equator and in mid to northern latitudes in white to light grey. The image was processed by the Instrument Team at the Institute of Planetary Research of DLR, Berlin (Germany). It was built by combining a super resolution black and white HRSC snap-shot image of the Earth and the Moon with colour information obtained by the blue, green, and red sensors of the instrument.

“The pictures and the information provided by the data prove the camera is working very well. They provide a good indication of what to expect once the spacecraft is in its orbit around Mars, at altitudes of only 250-300 kilometres: very high resolution images with brilliant true colour and in 3D,” says the Principal Investigator of the HRSC, Gerhard Neukum, of the Freie Universität of Berlin (Germany). This camera will be able to distinguish details of up to 2 metres on the Martian surface.

Another striking demonstration of Mars Express's instruments high performance are the data taken by the OMEGA spectrometer. Once at Mars, this instrument will provide the best map of the molecular and mineralogical composition of the whole planet, with 5% of the planetary surface in high resolution. Minerals and other compounds such as water will be charted as never before. As the Red Planet is still too far away, the OMEGA team devised an ingenious test for their instrument: to detect the Earth’s surface components.

As expected, OMEGA made a direct and unambiguous detection of major and minor constituents of the Earth’s atmosphere, such as molecular oxygen, water and carbon dioxide, ozone and methane, among other molecules. "The sensitivity demonstrated by OMEGA on these Earth spectra should reveal really minute amounts of water in both Martian surface materials and atmosphere," says the Principal Investigator of OMEGA, Jean Pierre Bibring , from the Institut d'Astrophysique Spatiale, Orsay, France.

The experts will carry on testing Mars Express’s instruments up till the arrival to the Red Planet, next December. The scientists agree on the fact that these instruments will enormously increase our understanding of the morphology and topography of the Martian surface, of the geological structures and processes - active now and in the past, and eventually of Mars’s geological evolution. With such tools, Mars Express is also able to address the important “water” question, namely how much water there is today and how much there was in the past. Ultimately, this will also tell us whether Mars had environmental conditions that could favour the evolution of life.

The Mars Express OMEGA spectrometer was developed and built by the Institut d'Astrophysique Spatiale, Orsay, France, in cooperation with LESIA at Meudon/Paris Observatory, France, IFSI in Frascati, Italy, and IKI in Moscow, Russia.