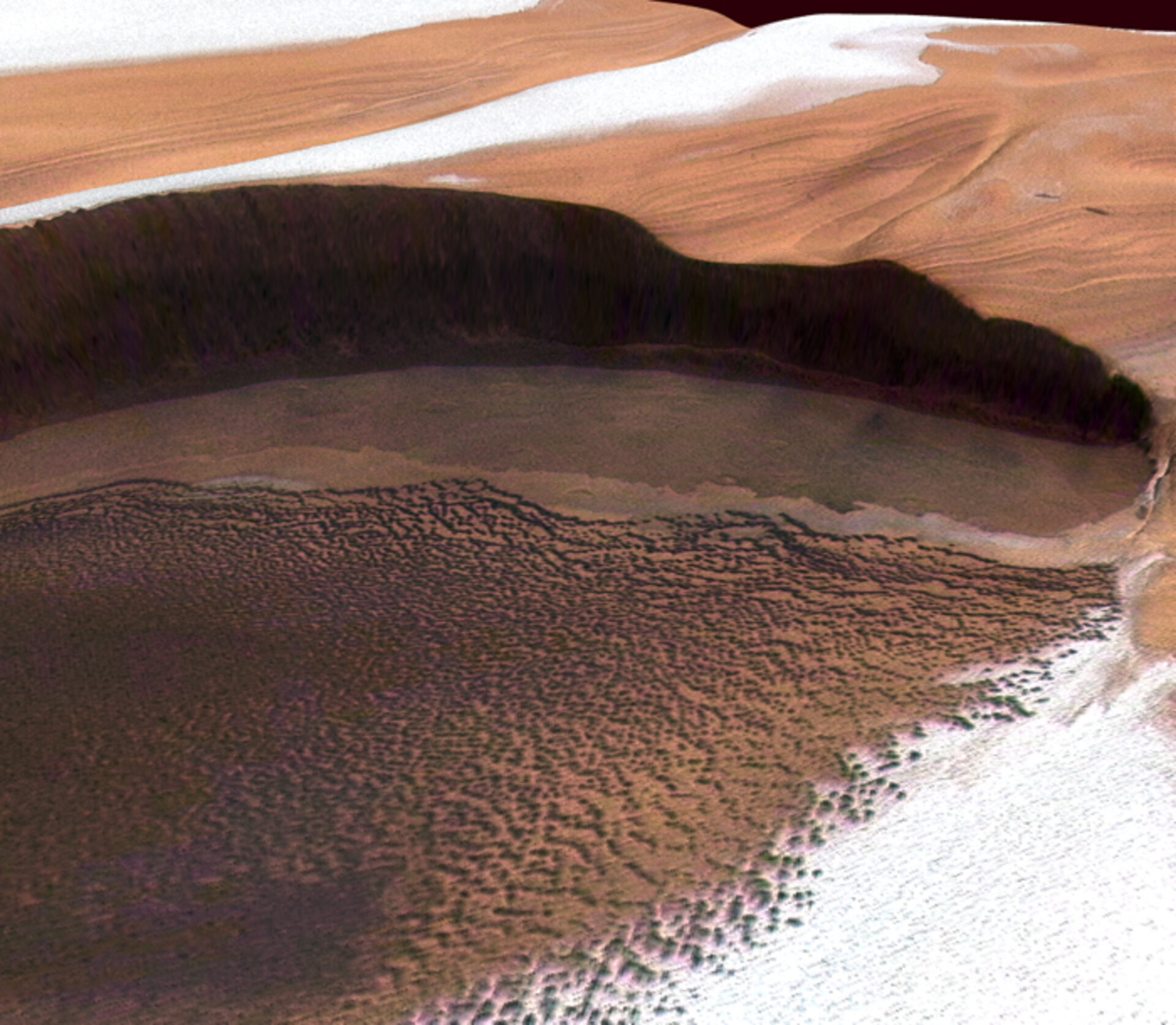 An ever clearer image of Mars takes shape after one year of observations of the Red Planet by ESA’s Mars Express spacecraft. Methane, formaldehyde, signs of recent glaciers and a frozen sea are only some of the stunning results presented today during a press conference at ESA’s European Space Research and Technology Centre (ESTEC), Noordwijk, in the Netherlands.

Water, climate, volcanic and geological activity, habitability and eventually the search for life on Mars are issues that the six operating instruments on board Mars Express are have already begun to address in the first year of operations.

OMEGA, the Mars Express Visible and Infrared Mapping spectrometer, has been looking at the surface and its minerals. It found out that along the past three thousand million years no permanent oceans or lakes were present on the planet. However, liquid water must have been present before that time, in the early history of the planet. OMEGA was able to spot visible signs of it, left today in the clays identified in cratered terrains, and in hydrates, minerals which can only form in presence of water. The observed lack of extended areas of carbonates indicates that the atmosphere of Mars, mainly composed by carbon dioxide, had not had the chance to combine with the surface, so it must have been massively lost in the early history of the planet, excluding the possibility of a long-term green-house effect. Today, Mars water reservoir is mainly constituted by ice concentrated at the two polar caps, where OMEGA has also identified extended areas of gypsum.

SPICAM, the Ultraviolet and Atmospheric Spectrometer has started providing fundamental information about the present habitability of Mars. It provided the first global climatologic picture of the ozone at Mars, and measured the presence of water vapour in the atmosphere. Observations show that on Mars, ozone is 300 times less than on Earth, implying that the planet’s protection from ultraviolet radiation coming from the Sun is very inefficient. The mixture between ozone and water vapour, increasing the presence of oxidisers molecules, associated with much solar ultraviolet radiation at ground level, make the martian environment hostile to the presence of surface life as we now it. SPICAM was also able to confirm a chemistry model, only predicted so far, by which water vapour has a role in the destruction of ozone. This gives rise to the question as to whether the increase of water vapour recorded in Earth’s stratosphere will also contribute to ozone destruction and consequently to global warming on our planet.

PFS, the Mars Express Planetary Fourier Spectrometer, had been looking into the composition and properties of the Martian atmosphere. The detection by PFS of important molecules, including methane and possibly formaldehyde, is providing new hints to answer the question as to whether life on Mars existed in the past or still exists on the planet today. Methane is a possible marker of biological activity, even if other possibilities, like the presence of active volcanism, also explain it. Formaldehyde can be considered as an oxidation product of methane. If this is the case on Mars, it means that an important production mechanism of methane (150 tons per year) must be at work on Mars. Is it vulcanism? Is it near-surface or subsurface biological activity? PFS has also observed that the distribution of water, that of methane and that of formaldehyde largely match, pointing to a common underground source for water and methane…What causes it? The thrilling debate is open.

Providing detailed and spectacular images of Mars has been the job of HRSC, the Mars Express High Resolution Stereo Camera. HRSC is compiling the first complete atlas of Mars in colour and 3D. HRSC provided the best details ever imagery of the surface, identifying spectacular signs of recent glacial, fluvial and volcanic activity. The latest image delivery shows gigantic waterfalls, huge glaciers and grand outflow channels left their signs in the Kasei Valley region. Near Mars’s equator, HRSC has identified what seems to be a 5 million year-old frozen sea of water, which was probably prevented from disappearing by a layer of volcanic ash. At the north pole, HRSC has taken the first ever 3D pictures of the layers of water ice and dust, and has photographed fields of volcanic cones showing signs of very recent volcanic activity. Is this activity still on going?

Among a variety of objectives, MaRS, the Radio Science Experiment onboard Mars Express, had been looking into the highest layers of Mars’s atmosphere (ionosphere), and into the way that Mars’s gravity field changes when large masses of ice form and disappear in the course of seasons. MaRS has started to tell us about atmospheric conditions at Mars in different times of a normal martian day. MaRS observed that in the morning, at dawn, the ionosphere of Mars is refilled by an avalanche of electrons and other charged particles caused by the radiation coming from the rising Sun. Looking at the Southern hemisphere, during the martian winter, MaRS provided the first detailed martian weather reports: low atmospheric pressure (4 millibar), very cold air (between –143°C and –130°C) and carbon dioxide snowfall!

ASPERA, the Energetic Neutral Atoms Analyser onboard Mars Express, has accurately measured the way particles in Mars's tenuous atmosphere interact with the energetic particles given off by the Sun, the so called 'solar wind'. The measurements reveal that the atmosphere of Mars is slowly eroding away because of the solar wind, which penetrates much further down into the atmosphere than previously thought. But ASPERA has also observed that Mars itself is radiating into space. This outflow, the planetary wind, is energised to unexpected high velocities at low altitudes by the solar wind. The planetary wind, dominated by atomic- and molecular oxygen, apparently originates form dissociated water, which seems the most vulnerable volatile, disappearing most quickly from Mars, thus making it even harder to sustain life on the surface!

On the other hand, scientists are more and more convinced that life was possible and actually existed on Mars in the distant past. After a long discussion on this topic, about three quarters of the over 200 participants to the First Mars Express Conference expressed their view that Mars must have had some sort of living organisms when the planet was much younger. The tantalising issue however remains as to whether life still exists there…