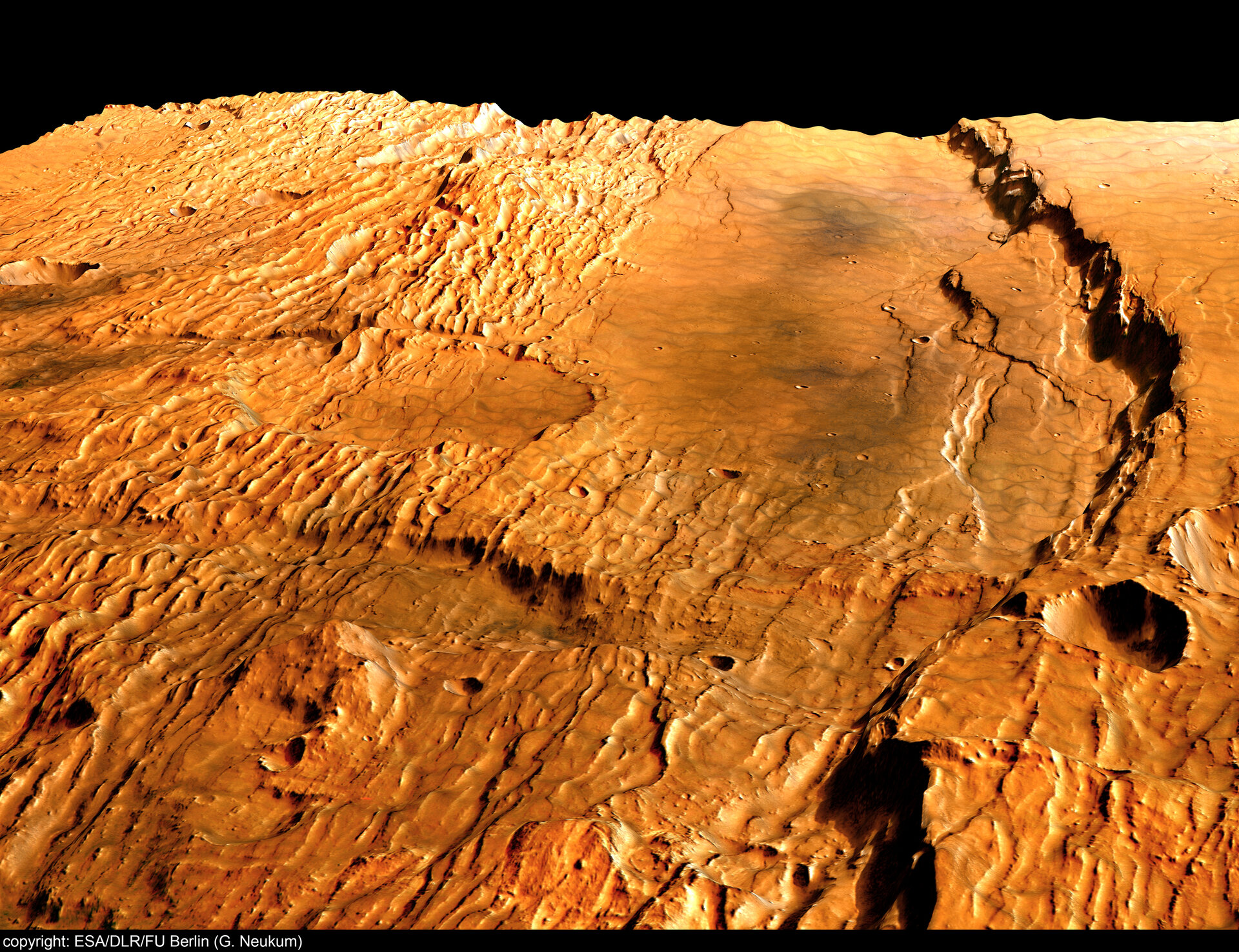 These images, taken by the High Resolution Stereo Camera (HRSC) on board ESA’s Mars Express spacecraft, show Claritas Fossae, a series of linear fractures located in the Tharsis region of Mars.

The HRSC obtained these images during orbit 563, with a resolution of approximately 62 metres per pixel. The image shows a region centred around latitude 25° South and longitude 253° East.

These fractures are radial to the Tharsis rise, consistent with the idea that they are the result of enormous stresses associated with formation of the 8-10 kilometre high Tharsis rise. Faults running east to west are also visible in the colour image and may have a similar origin.

In the east of the colour image, a prominent linear feature with a dark shadow is visible. This is most likely a normal fault, the eastern edge of a 100 kilometre wide ‘graben’. A graben is a block of Mars's crust which has dropped down due to an extension, or pulling, of the crust. This graben is characterised by a smooth surface and the difference in height between the edge of the graben and the plains east of the normal fault is roughly 2.3 kilometres. Alternatively, this feature may have resulted from surface collapse due to magma withdrawal.

The smooth surfaces in the image suggest this terrain has been resurfaced by lava flows. The observation that the lava flows have covered some of these faults, particularly in the west and north-east of the image, suggests that Claritas Fossae is older than the surrounding terrain.

The outline of a crater with a diameter of 50 kilometres is visible in the centre of the image. The softened appearance of the crater, and especially the observation that fractures extend across the crater, suggest this crater pre-dates the formation of the fractures. South of this crater, a faint outline is visible with a diameter of 70 kilometres, which may be another ancient crater.

West of these two craters, there is a small region with an interesting morphology, shown in the close-up image. These features seem to be weakly influenced by the north-south fractures. While the cause of emplacement of this terrain is still unclear, collapse of the surface due to the removal of subsurface ice might be responsible for these features.

By supplying new image data for Clarita Fossae, the HRSC camera allows improved study of the complex geology and history of the area. The stereo and colour capability of the HRSC camera provides scientists with the opportunity to better understand the Red Planet’s morphology, the evolution of rocks and landforms, and helps to pave the way for future Mars missions.