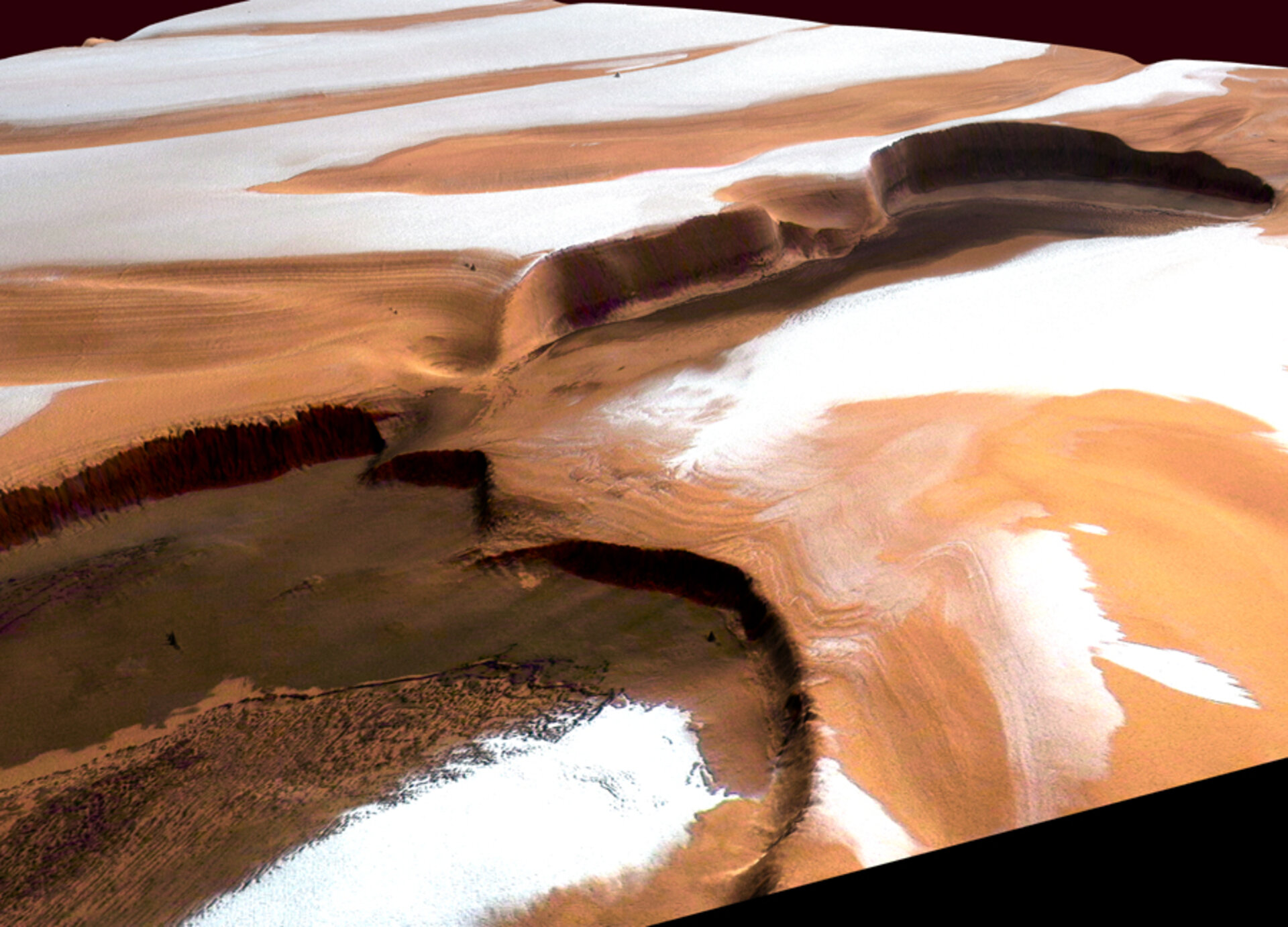 These images, taken by the High Resolution Stereo Camera (HRSC) on board ESA’s Mars Express spacecraft, were released at the First Mars Express Science Conference this week. They show the areas of focused research - water, ice, glaciers and volcanism.

These two images of the Martian north polar ice cap show layers of water ice and dust for the first time in perspective view. The close-up view (right) is the upper right section of the image above.

Here we see cliffs which are almost 2 kilometres high, and the dark material in the caldera-like structures and dune fields could be volcanic ash.

In the image above, also at the north pole, the Mars Express spacecraft saw fields of volcanic cones. Some are up to 600 metres high.

They appear to indicate very recent volcanic activity. The question remains, is it on-going activity?

The two smaller images are close-up top views of two cones: the left one is visible in the lighter top part of the main image, and the right one is just visible half way down the dark side of the slope.

The image above is Kasei Valles, one of the largest outflow channels on Mars, and contains a lot of evidence for glacial and fluvial activity over much of the planet's history.

Kasei Valles has been imaged before by the HRSC during orbit 61 from an altitude of 272 kilometres. These images are located about 29° North and 300° East.

The scour marks in the valley, shown in the image on the left, are most likely due to glacial erosion than by water erosion. This is contrary to what was previously thought.

The glacier that caused this valley was fed by water from the Echus Chasma region, which was driven out from underneath the surface by volcanic activity. Water was released by heating from volcanic activity in the channel floor as relatively recently as 20 million years ago.

Echus Chasma is the source region of the Kasei Valles channel. This perspective image was taken by Mars Express during orbit 97. It shows that liquid water was present on the surface of Mars thousands of millions of years ago.

Gigantic waterfalls poured over the 4000-metre high cliffs, and fed a lake in the valley. Later, when the planet became cooler, the lakes froze and glaciers formed, carving the giant Kasei Valles.

These perspective views of the western side of the Olympus Mons caldera show evidence of ice/snow and water. The close-up image (right) shows detail in the left side of the scarp above.

These findings were presented on 21 February at ESA's Mars Express Science Conference at ESTEC in Noordwijk, the Netherlands, where about 250 scientists from all over the world are discussing the first year of scientific results from Mars Express.