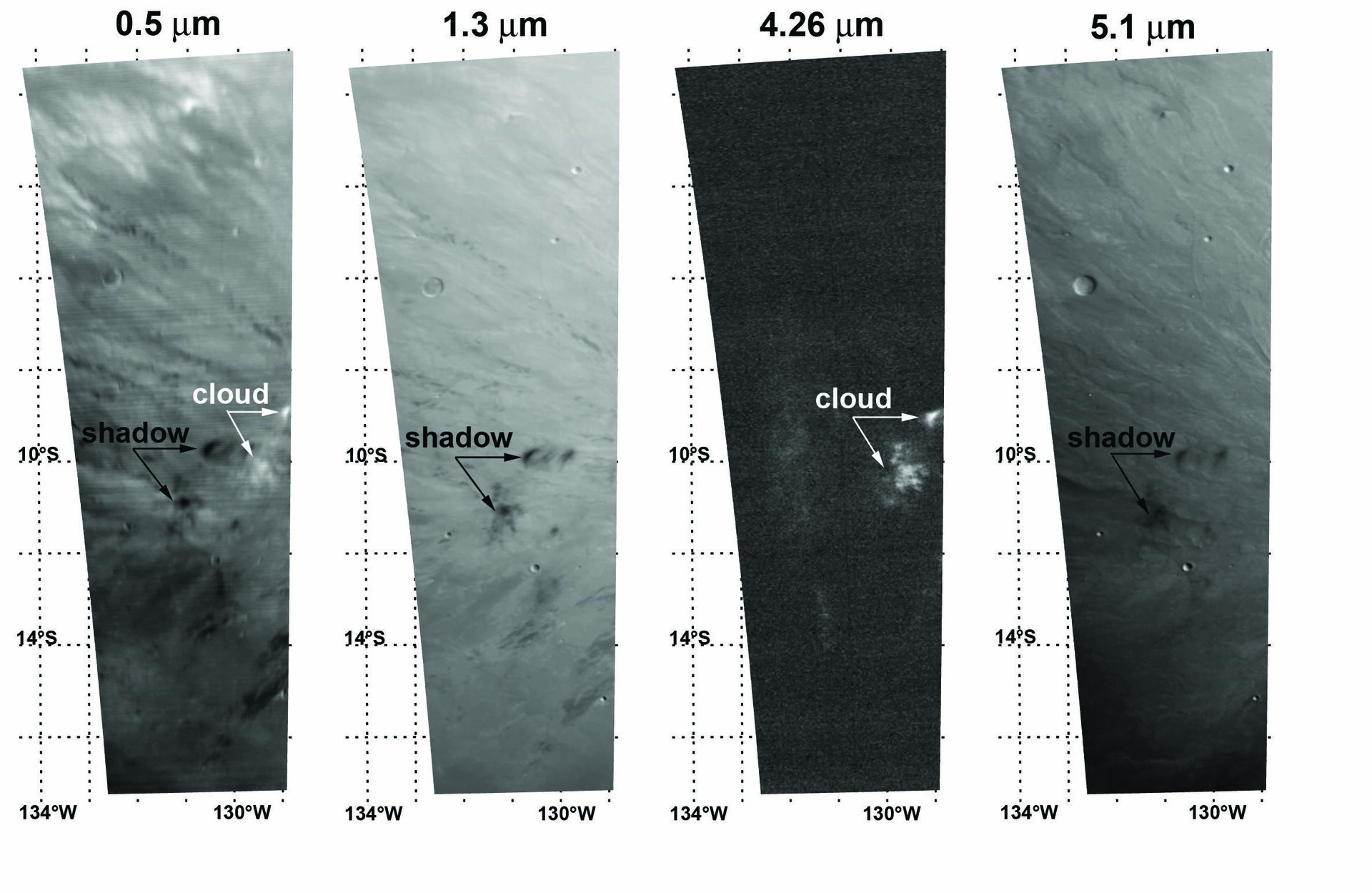 Until now, Mars has generally been regarded as a desert world, where a visiting astronaut would be surprised to see clouds scudding across the orange sky. However, new results show that the arid planet possesses high-level clouds that are sufficiently dense to cast a shadow on the surface.

The results were obtained by the OMEGA Visible and Infrared Mineralogical Mapping Spectrometer instrument on board ESA’s Mars Express.

Mars is not entirely a haven for Sun worshippers. Clouds of water ice particles do occur, for example on the flanks of the giant Martian volcanoes. There have also been hints of much higher, wispy clouds made up of carbon dioxide (CO2) ice crystals. This is not too surprising, since the thin Martian atmosphere is mostly made of carbon dioxide, and temperatures on the fourth planet from the Sun often plunge well below the ‘freezing point’ of carbon dioxide.

Now, a team of French scientists has shown that such clouds of dry ice do, indeed, exist. Furthermore, they are sometimes so large and dense that they throw quite dark shadows on the dusty surface.

“This is the first time that carbon dioxide ice clouds on Mars have been imaged and identified from above,” said Franck Montmessin of the Service d’Aeronomie, University of Versailles (UVSQ), lead author of the paper in the Journal of Geophysical Research. “This is important because the images tell us not only about their shape, but also their size and density.

“Previously, we had to rely on indirect information – for example, from the SPICAM instrument on board Mars Express - to find out what the clouds are made of. However, it is very difficult to separate the signals coming from the clouds, the atmosphere and the surface.”

Data from the SPICAM Ultraviolet and Infrared Atmospheric Spectrometer indicated that any high altitude clouds are not very thick and made up of much smaller particles, but the CO2 clouds detected by OMEGA are very different. Not only are they surprisingly high – more than 80 km above the surface – but they can be several hundred kilometres across. They are also much thicker than expected. Instead of looking like the wispy ice clouds seen on Earth, they resemble tall convectional clouds that grow as the result of rising columns of warm air.

Even more surprising is the fact that the CO2 ice clouds are made of quite large particles - more than a micron (one thousandth of a millimetre) across – and they are sufficiently dense to noticeably dim the Sun. Normally, particles of this size would not be expected to form in the upper atmosphere or to stay aloft for very long before falling back towards the surface.

“The clouds imaged by OMEGA can reduce the Sun’s apparent brightness by up to 40 per cent,” said Montmessin. “This means that they cast quite a dense shadow and this has a noticeable effect on the local ground temperature. Temperatures in the shadow can be up to 10°C cooler than their surroundings, and this in turn modifies the local weather, particularly the winds.”

Since the CO2 clouds are mostly seen in equatorial regions, the OMEGA team believes that the unexpected shape of the clouds and large size of their ice crystals can be explained by the extreme variations in daily temperature that occur near the equator.

“The cold temperatures at night and relatively high day-time temperatures cause large diurnal waves in the atmosphere,” explained Montmessin. “This means there is a potential for large-scale convection, particularly as the morning Sun warms the ground.”

Bubbles of warm gas rise above the surface and when they reach high levels they become cold enough for CO2 to condense. This process releases latent heat, which causes the gas and the ice particles to rise even further.

What are the particles around which the CO2 ice condenses? On Earth, cloud droplets form around tiny nuclei – often particles of dust or salt. On Mars, the answer remains uncertain. One possibility is that Martian dust is carried to high altitudes. Another potential source of condensation nuclei is particles left behind by micrometeorites entering the upper atmosphere. Or the nuclei may simply be tiny crystals of water ice carried aloft on the thermal updraughts.

“This discovery is important when we come to consider the past climate of Mars,” said Montmessin. “The planet seems to have been much warmer billions of years ago, and one theory suggests that Mars was then blanketed with CO2 clouds. We can use our studies of present-day conditions to understand the role that such high level clouds could have played in the global warming of Mars.”