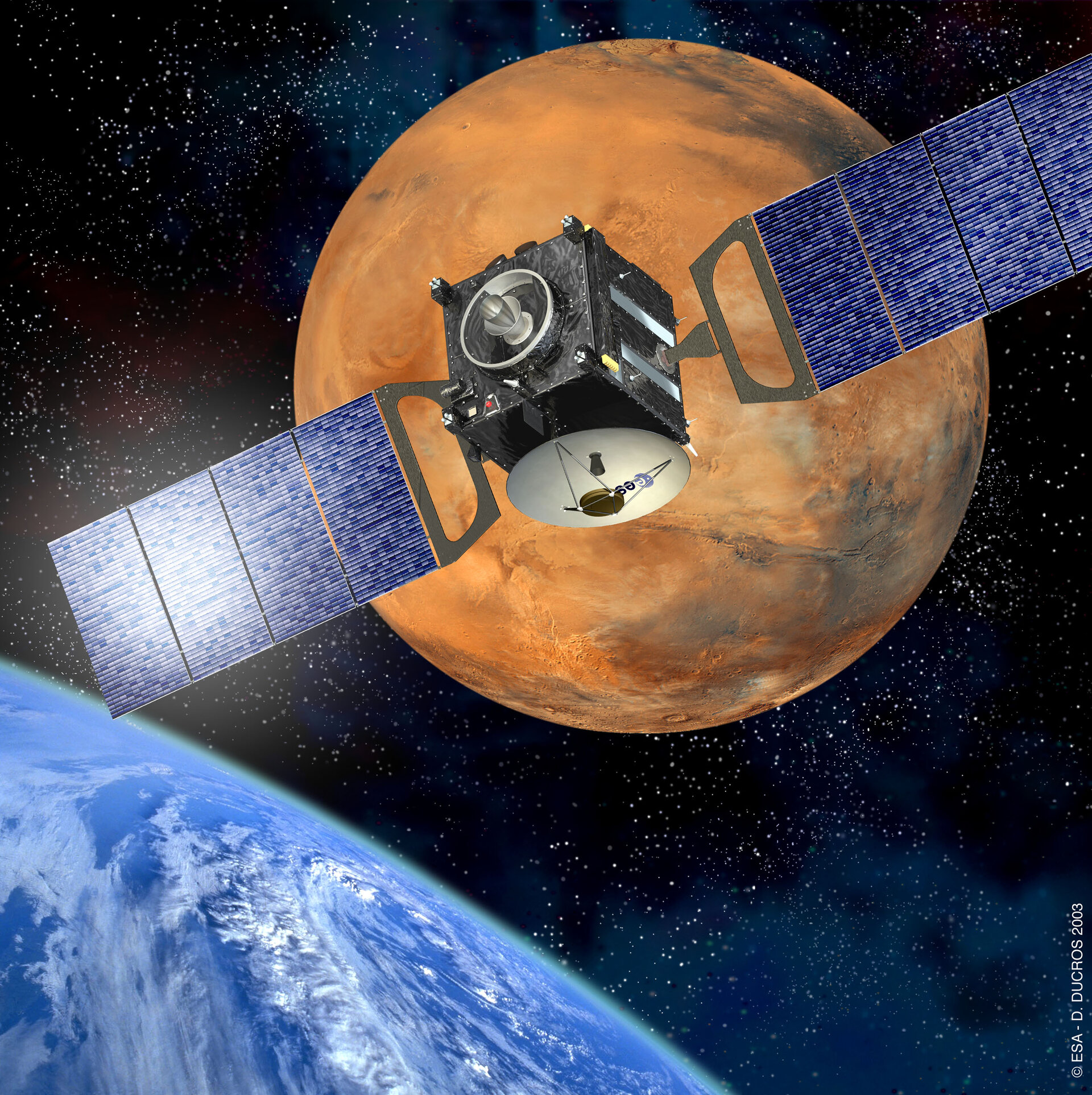 ESA INFO 12-2003. ESA’s Mars Express is a pioneering mission for several reasons. It is the first European voyage to Mars, it has been built at much less than the usual cost, and in record time.

Mars Express is the first example of ESA’s new style of developing scientific missions: faster, smarter and more cost-effective, but without compromising reliability and quality - there have been no cuts in tests or pre-launch preparations. Mars Express will face demanding technical challenges during its trip to the Red Planet and ESA engineers have worked hard to make sure it meets them.

"With Mars Express, Europe is building its own expertise in many fields. This ranges from the development of science experiments and new technologies - new for European industry - to the control of a mission that includes landing on another planet. We have never done this before,” says Rudi Schmidt, Mars Express Project Manager.

Mars Express’s design and development phase has taken about four years, compared with about six years for previous similar missions. And its cost, 300 million euros, is much less than other comparable planetary missions. The ‘magic’ lies in the new managerial approach being used.

This new approach includes the reuse of existing hardware and instruments. Also, the mission was developed by a smaller ESA team, who gave more responsibility to industry. Mars Express has been built by a consortium of 24 companies from ESA’s 15 Member States and the United States, led by Astrium as prime contractor.

However, mission safety was never compromised. “Although we were under heavy pressure towards the end of the project, we did not drop any of the planned tests to save time. I call this a fast design phase, followed by thorough testing activity,” says Schmidt.

This new streamlined development method will continue with Venus Express and probably other future missions.

Mars Express will be launched on 2 June on board a Soyuz-Fregat rocket from the Baikonur Cosmodrome in Kazakhstan. The mission consists of an orbiter and a lander, called Beagle 2. In its launch configuration, Mars Express is a honeycombed aluminium box that measures 1.5 by 1.8 by 1.4 metres (excluding solar panels), and weighs 1223 kilograms in total. The Beagle-2 lander travels attached to one side of the spacecraft, folded up rather like a very large pocket watch. Arrival at Mars is scheduled for late December this year, when Beagle 2 will land while the orbiter is entering its orbit around Mars.

The last activities of an intense launch campaign are taking place in Baikonur at this very moment. Mars Express arrived at the Cosmodrome on 20 March. The spacecraft, fuelled with 457 kilograms of propellant, was mounted on the Soyuz launcher on 24 May in a process that the Russians call ‘marriage’. The whole structure was rolled out to the launch pad on 29 May, four days before launch.

The fastest possible trip to Mars

One of the reasons scientists had to develop Mars Express so quickly arises from the fact that, this summer, Mars and the Earth will be especially close to each other. Although launch opportunities to go to Mars occur every 26 months - when the Sun, Earth and Mars form a straight line - this year the planets will be at their closest, which happens every 15 to 17 years. On top of that, calculations had shown that the best combination of fuel expenditure and travel time could only be achieved by launching in the period between 23 May and 21 June. The Mars Express team had to work very hard to meet this launch window.

As a tribute from one European high-tech organisation to another, Mars Express is carrying a small container of Ferrari red paint to the Red Planet.

Mars Express will separate from the Soyuz Fregat upper stage 90 minutes after liftoff. Then the solar arrays will open and the spacecraft will make contact with ESA’s ground station in New Norcia, Western Australia.

Mars Express will be travelling away from Earth at a speed of 3 kilometres per second. A crucial operation at this early stage of the trip will be to release the Beagle-2 launch clamps three days after launch. These clamps are extra gears to make sure that the lander stays securely attached to the spacecraft during the launch, but once in space they are not needed any more. A pyrotechnic device will be activated to release them. This will be a key step, necessary so that Beagle 2 can be ejected when the spacecraft arrives at Mars.

Every effort has been made to ensure that things go smoothly. Schmidt says: “We have tested all aspects of the mission well enough to be confident that there will be no errors or trivial mistakes. Mars Express has been developed in record time, but there have been no compromises on testing, including the ground segment."

Orbiting and landing on Mars

Six days before arrival at Mars, the lander will be released. This operation is regarded as one of the most complex of the Mars Express mission. Beagle 2, which weighs only 65 kilograms, is too light to carry a steering mechanism and is not designed to receive commands during cruise and landing. So Beagle 2 can only reach its planned landing site by relying on the orbiter to put it into the correct trajectory and drop it at a very precise point in space and at a specified speed. The ground control team at the European Space Operations Centre (ESOC) in Darmstadt, Germany, will guide this manoeuvre. To be ready for the approach to Mars and the ejection operations, engineers have been training for months with simulators that resemble sophisticated computer games. Tests will continue after Mars Express’s launch.

Approaching Mars, the orbiter will eject the lander and then be left on a collision course with the planet. In another key manoeuvre, ground controllers will have to adjust its trajectory, reducing its speed to 1.8 kilometres per second. At that speed, the planet’s gravity will be able to ‘capture’ the Mars Express orbiter and put it into Mars orbit. Ground controllers will still have to perform several manoeuvres to get the spacecraft into its final operational state - a highly elliptical polar orbit - from where the scientific observations can begin.

In the meantime, Beagle 2 will have landed on Mars. The landing area covers a large ellipsis, 300 kilometres long and 150 kilometres wide, on an equatorial region called Isidis Planitia. It was chosen in the light of the strong Martian winds and the relatively smooth surface of the site. The lander will deploy parachutes, and then large gas-filled bags will protect it as it bounces to a halt on the surface. Once landed, Beagle 2 will emit a ‘beep’, a signal that will tell operators at the United Kingdom’s Jodrell Bank radio telescope station that it has touched down safely. This 9-note call sign was composed for the Beagle-2 team by the British pop group, Blur.

Mars Express will investigate the Martian surface, subsurface, and atmosphere for at least two years. The lander will operate on the surface for about six Earth months, relaying its data to Earth through the orbiter.

Mars Express will help answer fundamental questions about Mars, such as the presence and quantity of water, and possible signs of present or past life. In the worldwide effort to explore the Red Planet in recent years, the European Mars Express mission represents the most thorough investigation of Mars attempted so far.