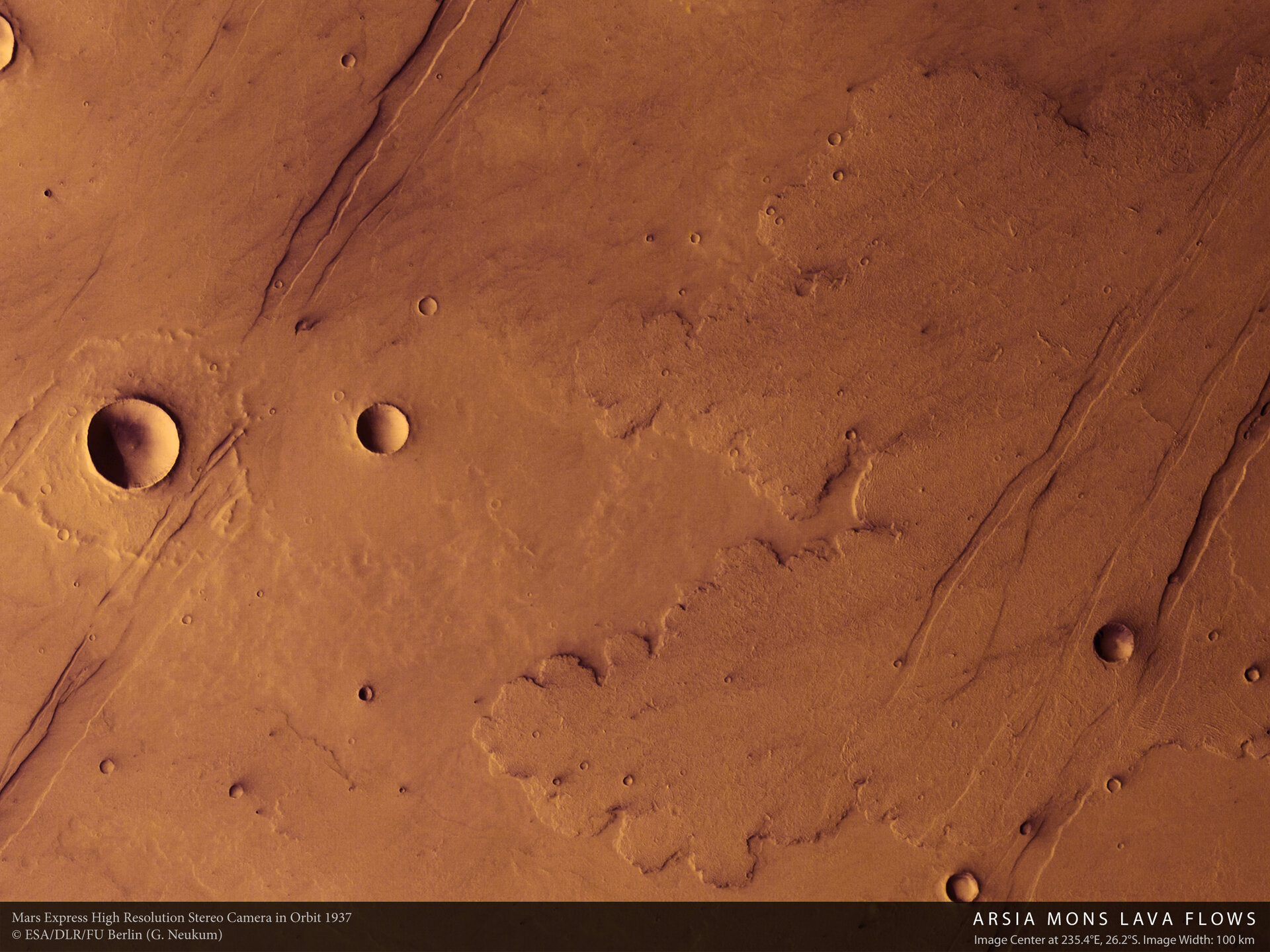 A new analysis of impact cratering data from Mars reveals that the planet has undergone a series of global volcanic upheavals. These violent episodes spewed lava and water onto the surface, sculpting the landscape that ESA’s Mars Express looks down on today.

Using images from the High Resolution Stereo Camera (HRSC) on Mars Express, Gerhard Neukum, Freie Universität Berlin, Germany, and colleagues are discovering the history of the Red Planet’s geological activity. “We can now determine the ages of large regions and resurfacing events on the planet,” says Neukum. Resurfacing occurs when volcanic eruptions spread lava across the planet’s surface.

This work has suggested that the sculpting of the Martian surface has not proceeded in a steady fashion, as it does on Earth. Rather, the team have discovered that Mars has been wracked by violent volcanic activity five times in the past, after the early supposedly warmer and wetter phase, more than 3.8 thousand million years ago. In between these episodes, the planet has been relatively calm.

The ages have been estimated by counting the number of small craters that appear on the landscape. The idea is simple: the older the surface, the more craters it will have accumulated as meteorites of all sizes have struck over the ages.

There has been a debate recently about the validity of this method. Some researchers believe that the small craters are not produced by incoming meteorites but by chunks of Martian rock blasted over the surface after a single large impact. However American researchers, analysing seven years’ worth of images from the Mars Orbiter Camera (MOC) on NASA’s Mars Global Surveyor, have found new craters appearing on the surface during that time.

“The present day cratering rate can be calculated from their observations,” says Neukum. It fits very closely with the cratering rate he established from the Mars Express data with Bill Hartmann, Planetary Science Institute, Tucson, Arizona, giving him confidence in the estimates.

During these volcanic episodes, eruptions of lava flowed across Mars. The internal heat generated by the volcanic activity also caused water to erupt from the interior, causing wide-scale flash flooding.

As for why Mars behaves like this, geophysical computer-based models suggest that the planet has been trying to establish a system of plate tectonics, as there is on Earth where the crust is broken into slowly moving plates. On Mars, the volcanic episodes represent the planet almost achieving, but not actually attaining, plate tectonics – and these volcanic episodes might not be over.

“The interior of the planet is not cold yet, so this could happen again,” says Neukum.

Far from revealing a geologically dead world, Mars Express is exposing a place of subtle activity that could still erupt into something more spectacular.

This article is based on results being presented today at the Lunar and Planetary Science Conference at League City, Texas, USA.