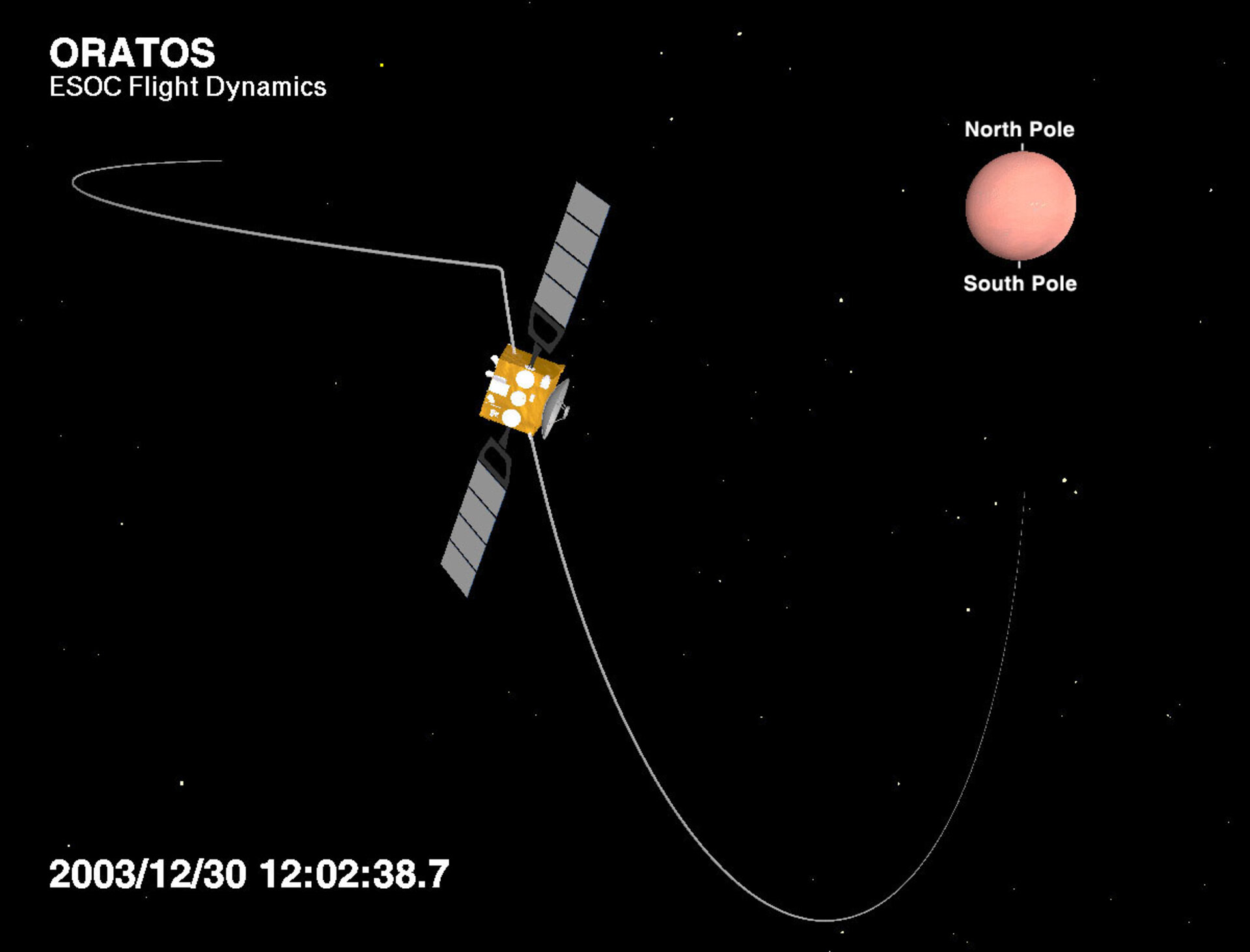 At 09:00 CET, the first European mission to Mars registered another operational success. The Mars Express flight control team at ESOC executed another critical manoeuvre, bringing the spacecraft from an equatorial orbit into a polar orbit around Mars.

All commands were transmitted to Mars Express via ESA's new Deep Space Station in New Norcia, Australia. This morning, the main engine of Mars Express was fired for four minutes to turn the spacecraft into a new direction, at a distance of 188 000 kilometres from Mars and about 160 million kilometres from Earth. On 4 January 2004, this new polar orbit will be reduced even further.

In a polar orbit, Mars Express can now start to prepare its scientific observation mission as planned, working much like an 'Earth-observation satellite' but around Mars.

From the second half of January 2004, the orbiter's instruments will be able to scan the atmosphere, the surface and parts of the subsurface structure of Mars with unmatched precision.

The MARSIS radar, for example, will be able to scan as far as four kilometres below the surface, looking for underground water or ice. The High Resolution Stereo Camera will take high-precision pictures of the planet and will begin a comprehensive 3D cartography of Mars.

Also, several spectrometers will try to unveil the mysteries of Martian mineralogy and the atmosphere, as well as influences from the solar wind or seasonal changes.

The change of orbit by the Mars Express orbiter will allow increasingly closer looks at the Beagle 2 landing site, which measures 31 kilometres by 5 kilometres.

In this narrowing polar orbit, the orbiter will fly directly over the landing site at an altitude of 315 kilometres on 7 January 2004, at 13:13 CET.

The reduced distance, the ideal angle of overflight and originally foreseen communication interfaces between the 'mother' and 'baby' will increase the probability of catching signals from the ground.

The Mars Express flight control team of ESA in Darmstadt, Germany, is in regular contact with its colleagues of the Beagle 2 team and with NASA ground stations.

ESA is grateful for this spirit of dynamic international co-operation on its first mission to Mars.

Next status report on the Mars Express mission

In the case of major news on the mission, the media will be informed immediately.