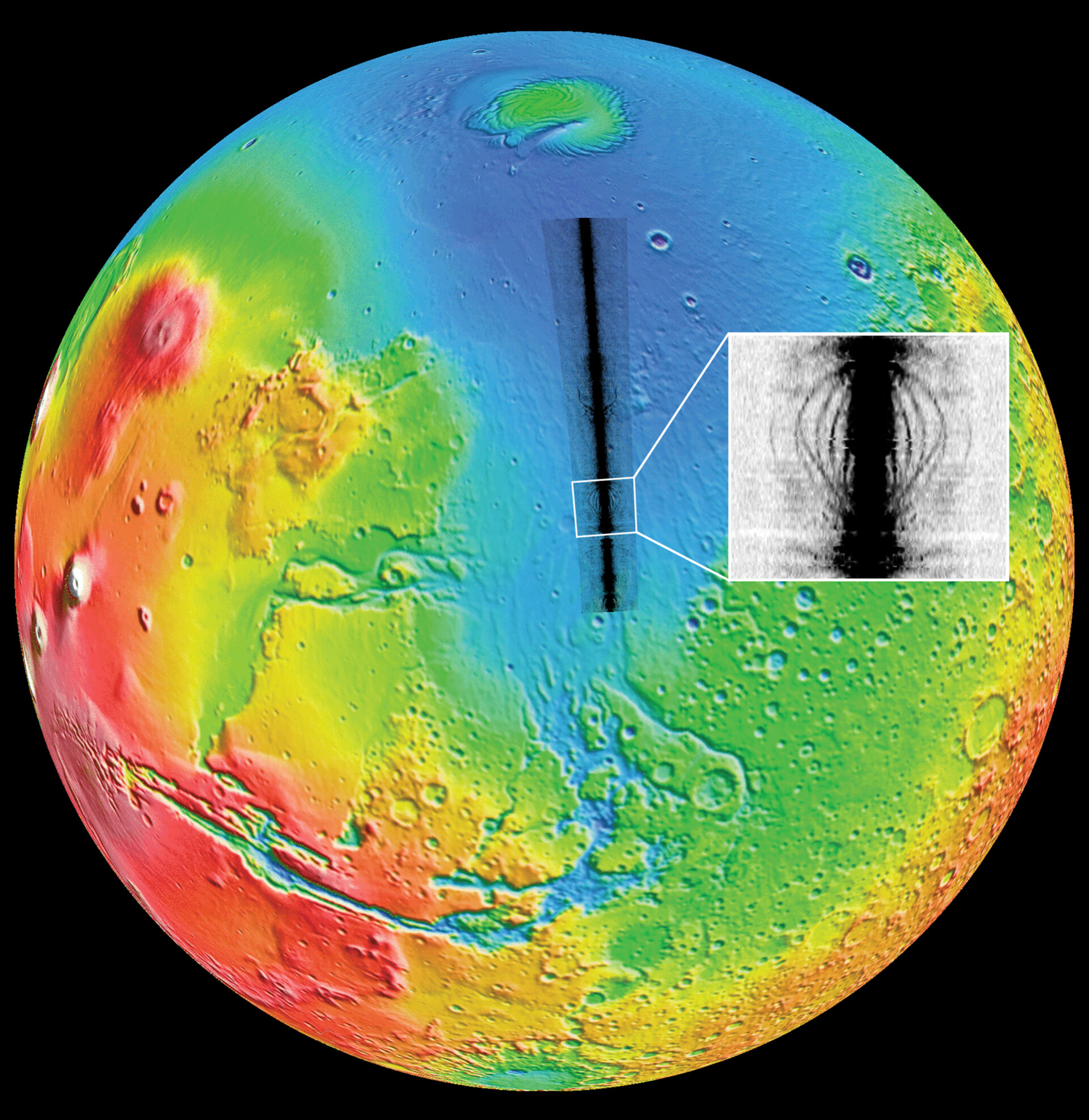 ESA PR 45-2006. With results that the principal investigator of the Mars Express MARSIS radar, Giovanni Picardi, from the University of Rome ‘La Sapienza’, describes as unprecedented, Mars is showing scientists that it has an older, craggier face buried beneath its surface.

The results were obtained by MARSIS, the pioneering sounding radar on board ESA’s Mars Express orbiter, and provide important new clues about the still mysterious geological history of Mars.

Observations by MARSIS, the first sub-surface sounding radar used to explore a planet, strongly suggest that ancient impact craters lie buried beneath the smooth, low plains of the northern hemisphere of Mars. The technique uses echoes of radio waves that have penetrated below the surface.

MARSIS found evidence that these buried impact craters – from about 130 to 470 kilometres in diameter – are present under much of the northern lowlands. The findings appear in the 14 December issue of the journal Nature.

With MARSIS "it's almost like having X-ray vision," said Thomas R. Watters of the National Air and Space Museum's Center for Earth and Planetary Studies, Washington, and lead author of the results. "Besides finding previously unknown impact basins, we've also confirmed that some subtle, roughly circular, topographic depressions in the lowlands are related to impact features."

Studies of how Mars evolved aid understanding of early Earth. Some signs of the forces at work a few thousand million years ago are harder to detect on Earth because many of them have been obliterated by tectonic activity and erosion.

The new findings bring planetary scientists closer to understanding one of the most enduring mysteries about the geologic evolution and history of Mars. In contrast to Earth, Mars shows a striking difference between its northern and southern hemispheres. Almost the entire southern hemisphere has rough, heavily cratered highlands, while most of the northern hemisphere is smoother and lower in elevation.

Since the impacts that cause craters can happen anywhere on a planet, the areas with fewer craters are generally interpreted as younger surfaces where geological processes have erased the impact scars. The surface of Mars' northern plains is young and smooth, covered by vast amounts of volcanic lava and sediment. However, the new MARSIS data indicate that the underlying crust is extremely old.

“The number of buried impact craters larger than 200 kilometres in diameter that we have found with MARSIS,” said Jeffrey Plaut, MARSIS co-Principal Investigator, from the Jet Propulsion Laboratory, California, “tells us that the underlying crust in the northern lowlands must be very ancient, dating to the Early Noachian epoch (lasting from the planet's birth to about 4 thousand million years ago).” The Early Noachian was an era in which impact cratering was very intense across the Solar System.

The results suggest that the northern lowlands crust is as old as the as the oldest exposed southern highlands, also dated in the Noachian epoch, and that the dichotomy between northern and southern hemispheres probably formed very early in the history of Mars.

“These results are truly interesting and unprecedented,” added Giovanni Picardi, MARSIS Principal Investigator, from the University of Rome ‘La Sapienza’. “MARSIS can contribute to understand the geology of Mars through the analysis of the surface and sub-surface morphology. In addition, with a detailed analysis of the instrument’s data, we can also obtain valuable indications about the composition of the materials.”

The MARSIS instrument was developed within the framework of a Memorandum of Understanding between the Italian Space Agency (ASI) and NASA. It was developed by Alenia Spazio under ASI management and the scientific supervision of the University of Rome ‘La Sapienza’, in partnership with the Jet Propulsion Laboratory (JPL) in Pasadena, California, and the University of Iowa. It is the first instrument ever designed to actually look below the surface of Mars.

The Italian-American MARSIS team is also largely involved in the SHARAD radar, a facility instrument provided by ASI for NASA’s Mars Reconnaissance Orbiter (MRO), launched on12 August 2005. MARSIS and SHARAD are two radars designed to provide complementary information about the Martian subsurface. MARSIS can penetrate to depths of 5 kilometres or more, while SHARAD is probing layers closer to the surface down to 1 kilometre.