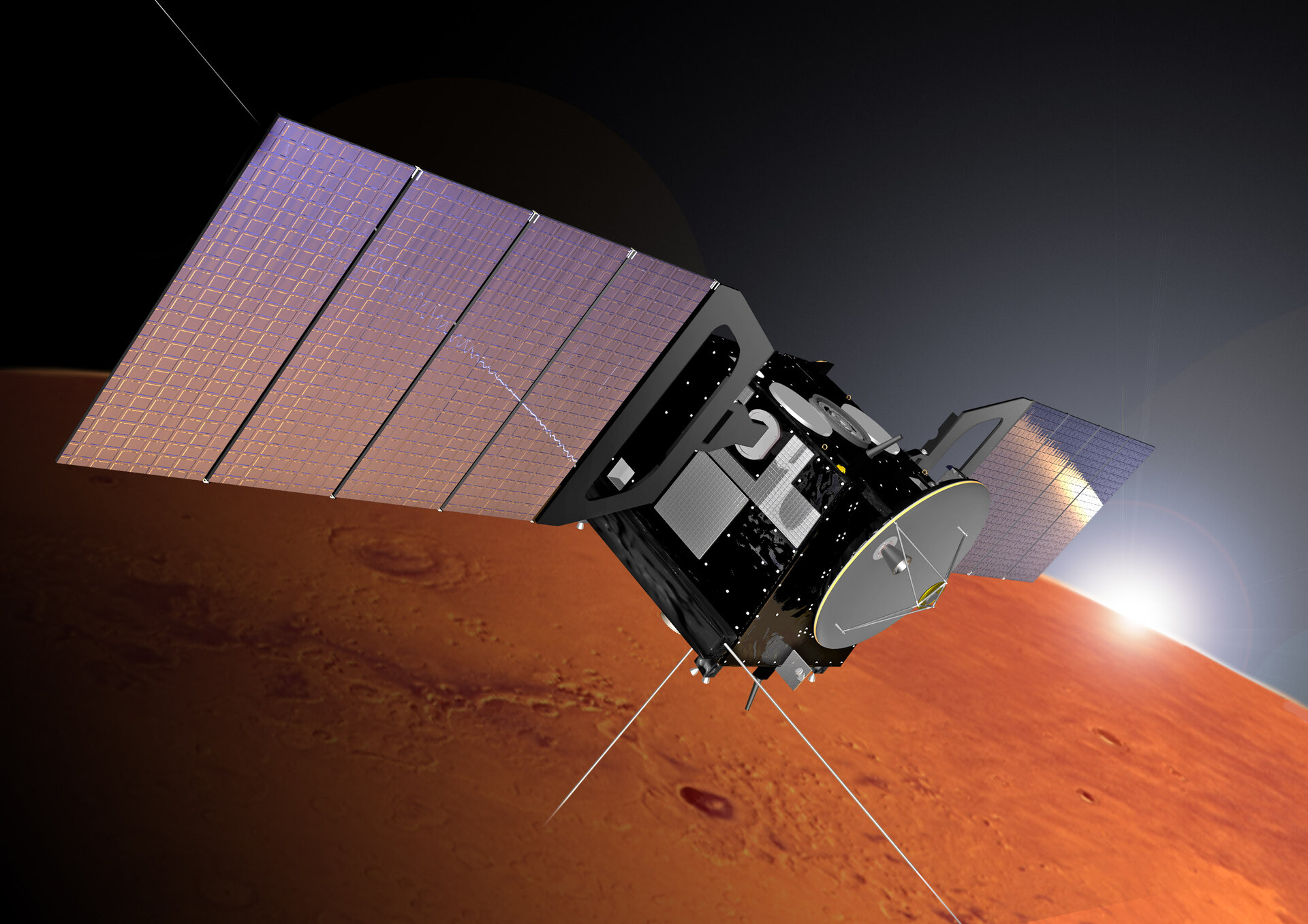 Mars may not be as dormant as scientists once thought. The 2004 discovery of methane means that either there is life on Mars, or that volcanic activity continues to generate heat below the martian surface. ESA plans to find out which it is. Either outcome is big news for a planet once thought to be biologically and geologically inactive.

The methane mystery started soon after December 2003, when ESA’s Mars Express arrived in orbit around the red planet. As the Planetary Fourier Spectrometer (PFS) began taking data, Vittorio Formisano, Istituto di Fisica dello Spazio Interplanetario CNR, Rome, and the rest of the instrument team saw a puzzling signal. As well as the atmospheric gases they were anticipating, such as carbon monoxide and water vapour, they also saw methane.

While there are ways to produce methane without life, such as by volcanic activity, it is the possible biological route that has focused attention on the discovery.

“Methane was a surprise, we were not expecting that,” says Agustin Chicarro, ESA Mars Lead Scientist. The reason is that on Earth much of the methane in our atmosphere is released by evolved life forms, such as cattle digesting food. While there are ways to produce methane without life, such as by volcanic activity, it is the possible biological route that has focused attention on the discovery.

The Mars Express detection of methane is not an isolated case. While the spacecraft was en route, two independent teams of astronomers using ground-based telescopes started to see traces of methane. After five years of intensive study, the suite of observations all confirmed the discovery and presented planetary scientists with a big puzzle.

Methane is thought to be stable in the martian atmosphere for around 300 years. So, whatever is generating the methane up there, it is a recent occurrence. In January 2009, a team led by Michael Mumma of NASA’s Goddard Space Flight Center published results that the methane they saw in 2003 was concentrated in three regions of the planet. This showed that the methane was being released at the present time and was being observed before it had time to distribute itself around the planet.

Things then took a strange turn. Instead of taking 300 years to disappear, the methane had almost entirely vanished by early 2006. Clearly something unusual is going on at Mars. “We thought we understood how methane behaved on Mars but if the measurements are correct then we must be missing something big,” says Franck Lefèvre, Université Pierre et Marie Curie, CNRS, Paris and a member of Mars Express’s SPICAM instrument team.

Something is removing the methane from the atmosphere 600 times faster than the models can account for.

Together with his colleague François Forget, Mars Express Interdisciplinary Scientist in charge of atmospheric studies and also of Université Pierre et Marie Curie, CNRS, Paris, Lefèvre has investigated the disappearance using a computer model of Mars’ climate. “We have tackled the problem as atmospheric physicists, without worrying about the nature of the source of the methane,” he says.

In results published last week they found that, while their computer model can reproduce atmospheric species such as carbon monoxide and ozone, it is unable to reproduce the behaviour of the methane. “Something is removing the methane from the atmosphere 600 times faster than the models can account for,” says Lefèvre. “Consequently, the source must be 600 times more intense than originally assumed, which is considerable even by Earth’s geological standards.”

To remove methane at such a rate, suspicion falls on the surface of the planet. Either the methane is being trapped in the dust there or highly reactive chemicals such as hydrogen peroxide are destroying it, as was hinted by the Viking missions in the 1970s. If the latter, then the surface is much more hostile to organic molecules (those containing carbon) than previously thought. This will make searching for traces of past or present life much tougher and future rovers will have to drill below the martian surface to look for signs of life.

To help get to the bottom of the methane mystery, ESA and the Italian space agency (ASI) are to hold a three-day international workshop in November. The assembled scientists will discuss the results and plan strategies for the future study of methane. At the workshop, the Mars Express PFS team hopes to present a global map of martian methane. “We have made the PFS mapping a priority over the last few months,” says Olivier Witasse, ESA Project Scientist for Mars Express.

Either the methane is being trapped in the dust there or highly reactive chemicals such as hydrogen peroxide are destroying it [...] If the latter, then the surface is much more hostile to organic molecules than previously thought.

In July, ESA agreed with NASA to launch joint missions to Mars. The topic of methane is of such importance that it will be most likely addressed in these future missions. “Understanding the methane on Mars is one of our top priorities,” says Witasse.

However the methane is eventually explained, it makes Mars a more fascinating place than even planetary scientists dreamed.

"Observed variations of methane on Mars unexplained by known atmospheric chemistry and physics" by F. Lefèvre and F. Forget was published in Nature on 6 August 2009.