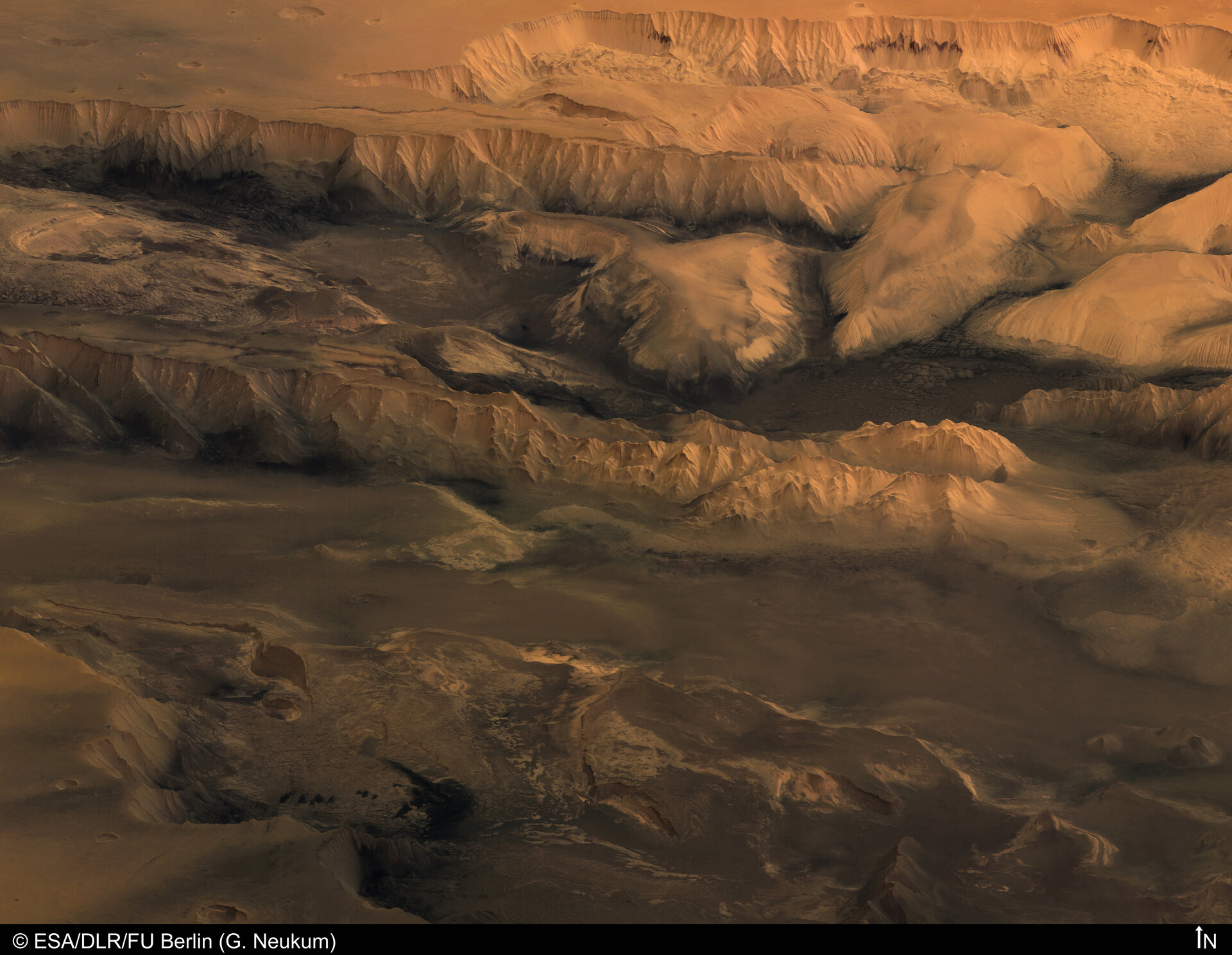 These images, taken by the High Resolution Stereo Camera (HRSC) on board ESA’s Mars Express spacecraft, show the central part of the 4000-kilometre long Valles Marineris canyon on Mars.

The scenes show an area of approximately 300 by 600 kilometres and are taken from an image mosaic that was created from the two orbit sequences. The image above is located between 3º to 13º South, and 284º to 289º East.

Valles Marineris was named after the US Mariner 9 probe, the first spacecraft to image this enormous feature in 1971. Here, the huge canyon which runs east to west is at its widest in the north-south direction.

It remains unclear how this gigantic geological feature, unparalleled in the Solar System, was formed. Tensions in the upper crust of Mars possibly led to cracking of the highlands. Subsequently, blocks of the crust slid down between these tectonic fractures.

The fracturing of Valles Marineris could have occurred thousands of millions of years ago, when the Tharsis bulge (west of Valles Marineris) began to form as the result of volcanic activity and subsequently grew to the dimensions of greater than a thousand kilometres in diameter and more than ten kilometres high. On Earth, such a tectonic process is called ‘rifting’, presently occurring on a smaller scale in the Kenya rift in eastern Africa.

The collapse of large parts of the highland is an alternative explanation. For instance, extensive amounts of water ice could have been stored beneath the surface and were then melted as a result of thermal activity, most likely the nearby volcanic Tharsis province.

The water could have travelled towards the northern lowlands, leaving cavities beneath the surface where the ice once existed. The roofs could no longer sustain the load of the overlying rocks, so the area collapsed.

Regardless of how Valles Marineris might have formed, it is clear that once the depressions were formed and the surface was topographically structured, heavy erosion then began shaping the landscape.

Two distinct landforms can be distinguished. On one hand, we see sheer cliffs with prominent edges and ridges. These are erosion features that are typical in arid mountain zones on Earth.

Today, the surface of Mars is bone dry, so wind and gravity are the dominant processes that shape the landscape (this might have been much different in the geological past of the planet when Valles Marineris possibly had flowing water or glaciers winding down its slopes).

In contrast, some gigantic ‘hills’ (indeed, between 1000 and 2000 metres high) located on the floors of the valleys have a smoother topography and a more sinuous outline. So far, scientists have no definitive explanation for why these different landforms exist.

Below the northern scarp, there are several landslides, where material was transported over a distance of up to 70 kilometres. Also seen in the image there are several structures suggesting flow of material in the past. Therefore, material could have been deposited in the valleys, making the present floor look heterogeneous.

In the centre of the image, there are surface features that appear similar to ice flows. These were previously identified in pictures from the US Viking probes of the 1970s; their origin remains a mystery.