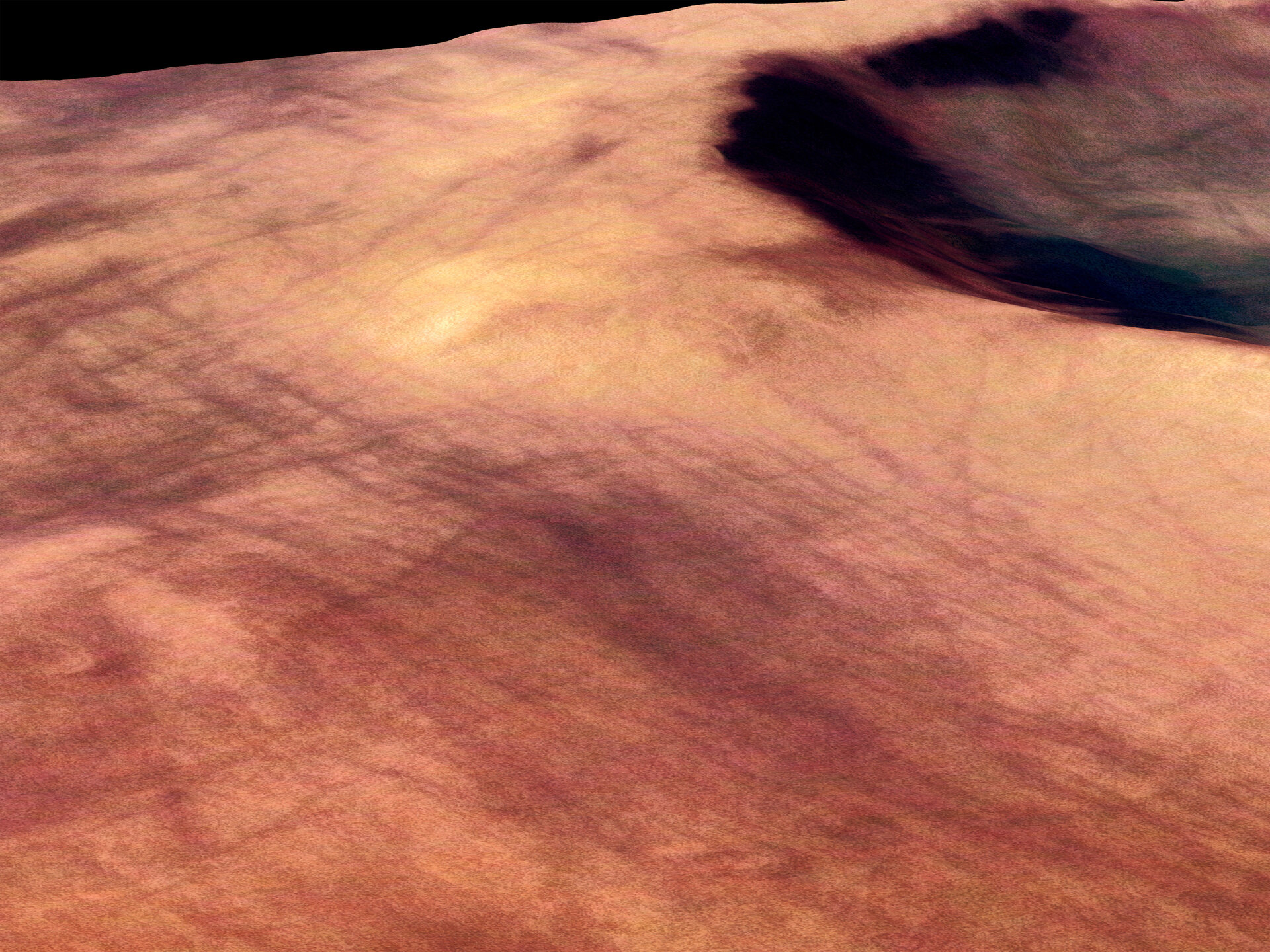 These images, taken by the High Resolution Stereo Camera (HRSC) on board ESA’s Mars Express spacecraft, show a part of the southern highlands of Mars, called Promethei Terra.

The images were taken during orbit 368 in May 2004 with a ground resolution of approximately 14 metres per pixel.

The displayed region is centred around longitude 118° East and latitude 42° South.

The images show an area in the Promethei Terra region, east of the Hellas Planitia impact basin.

The smooth surface is caused by a layer of dust or volcanic ash that is up to several tens of metres thick.

Although the above close-up image was taken at high resolution and shows very fine detail like the dunes seen in the close-up image at right, this dust covering layer leads to a slightly fuzzy appearance.

The large impact crater in the southern part of the image is 32 kilometres wide and up to 1200 metres deep.

The dark crater floor is most likely the result of ‘deflation’, the geological term for the lifting and removal of loose material.

The dust removed here has accumulated in the southern part of the crater, forming a thick layer. The numerous dark tracks to the north-western and west are ‘dust devil’ tracks.

These atmospheric ‘eddies’, like tornadoes on Earth, remove the uppermost dust layers which have a slightly different colour to the now-exposed surface. The tracks can be more than 20 kilometres long and contrast prominently with the lighter-coloured surroundings.

Dust devil tracks provide short-lived evidence of the ongoing geological and atmospheric activity on Mars, which consists mainly of the transport of dust by wind.

Another sign for this ‘aeolian’ (wind-related) activity in the area is the existence of small dune fields that have formed in some of the depressions. They can be seen in the crater in the north and in its surroundings (see lower close-up view).

The dust devils are not limited by geomorphological boundaries: for example, their tracks cross the crater rim. Dust devil tracks can also be seen on the thick dust layer in the southern part of the crater.

Due to the thickness of the dust layer, no darker material is exposed here. The dust devil tracks show two distinct directions of movement: east to west and south-east to north-west.