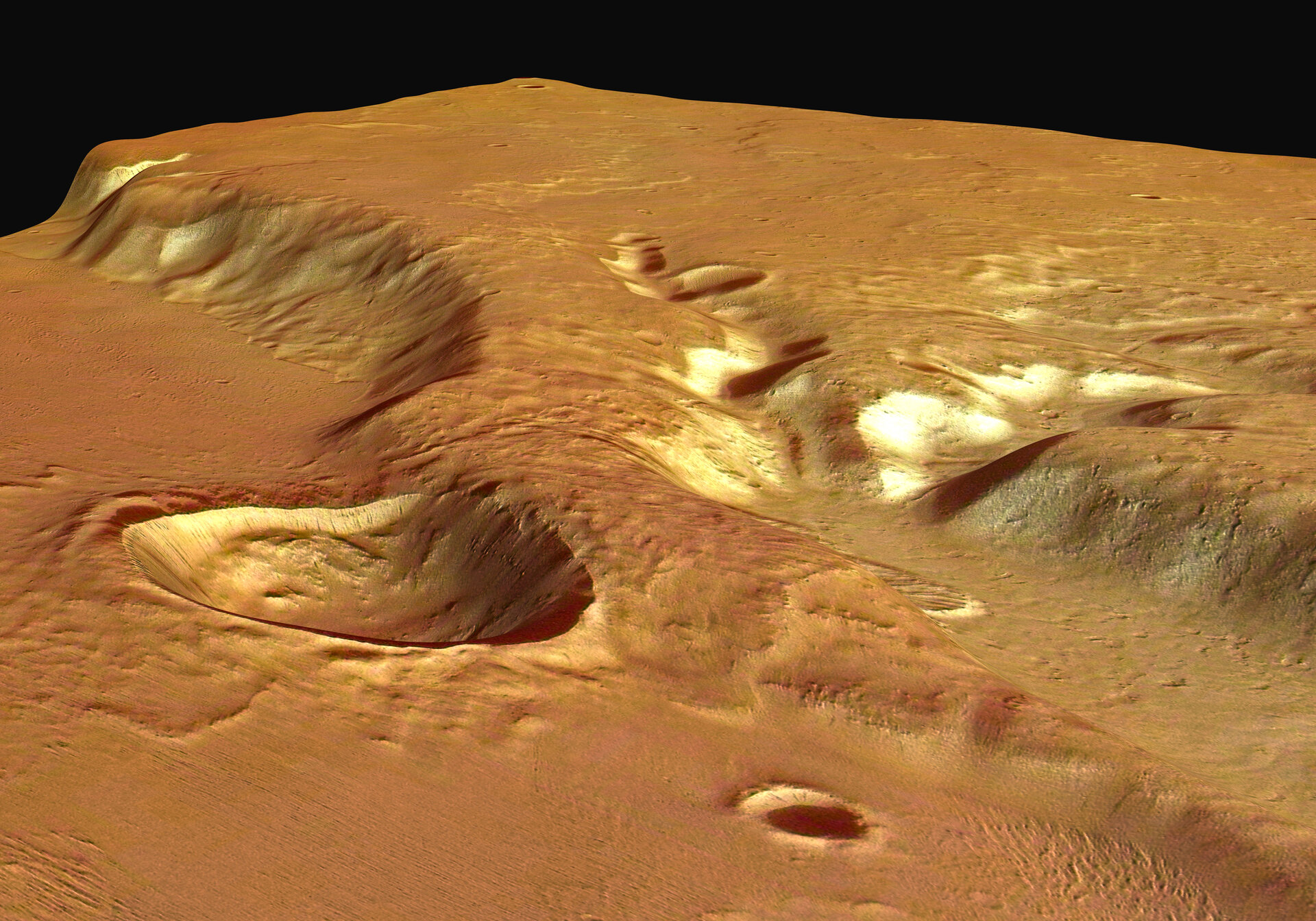 These images, taken by the High Resolution Stereo Camera (HRSC) on board ESA’s Mars Express spacecraft, show part of the Medusa Fossae formation and adjacent areas at the highland-lowland boundary on Mars.

The HRSC obtained these images during orbit 917 with a resolution of approximately 13 metres per pixel. The scenes show an area located at about 5º South and 213º East.

The Medusa Fossae formation is an extensive unit of enigmatic origin found near the Martian ‘highland-lowland dichotomy boundary’ between the Tharsis and Elysium centres of volcanic activity. This dichotomy boundary is a narrow region separating the cratered highlands, located mostly in the southern hemisphere of Mars, from the northern hemisphere's lowland plains.

The cratered highlands stand two to five kilometres higher than the lowland plains, so the boundary is a relatively steep slope. The processes that created and modified the dichotomy boundary remain among the major unanswered issues in Mars science.

The boundary between the old volcanic plateau region and part of the widespread deposits of the Medusa Fossae formation, called Amazonis Sulci, is shown in this image. In general, the formation appears as a smooth and gently undulating surface, but is partially wind-sculpted into ridges and grooves, as shown in the mosaic of nadir images.

It is commonly agreed that the materials forming Medusa Fossae were deposited by pyroclastic flows or similar volcanic ash falls. The plateau walls of the volcanic massif are partly covered by lava flows and crossed in places by valleys which were most likely carved by fluvial activity.

The remains of water-bearing inner channels are visible in the centre of the valleys and at the bottom of the massif. Superposition of the lobe-fronted pyroclastic flows indicates that the water erosion ended before their deposition. Later, a ‘bolide’ impacted near the massif and the ejecta blanket was spread as a flow over parts of the plateau, implying water or ice was present in the subsurface at the time of impact.

A bolide is any extraterrestrial body in the 1-10 kilometre size range, which impacts on a planetary surface, explodes on impact and creates a large crater. This is a generic term, used when we do not know the precise nature of the impacting body, whether it is a rocky or metallic asteroid, or an icy comet, for example.

The highland-lowland boundary. Here the volcanic plateau fed by the southernmost Tharsis Montes volcano Arsia Mons, is dissected by several valleys which were most likely carved by running water. Here the Senus Vallis is shown in detail as an example where the latest-stage inner channel is still visible.

This is the mouth of Abus Vallis, a channel of the same type as in Detail 1. Here the walls are too steep or the valley too narrow to look down to the bottom of the channel due to insolation and shading of the image, but the remains of the last stage of water activity can be traced as a small channel at the floor of the lowland plain. Additionally the emplacement of pyroclastic flows is visible in this detail. It shows that the action of water erosion ended before the emplacement of the pyroclastic flow.

An impact crater is the youngest feature of the ‘stratigraphic’ sequence (layers of rocks produced over time) which can be observed in this image. This crater has a well preserved ejecta blanket with a ‘lobate’ (lobe-like) appearance, which is believed to indicate the presence of water or water ice in the impacted target. As a crater forms on a flat surface, it expands in a circular fashion. Due to the topography of the impact site the shape of the crater during expansion was disturbed by the walls of the plateau and resulted in an asymmetrical shape. The distribution of ejecta, resembling the wings of a butterfly, is due to a non-vertical impact (less than 45 degrees).

The Amazonis Sulci, with its ridges and grooves, appears to be wind-sculpted. The lack of craters superposing this surface indicates that wind erosion has been the latest stage of eroding processes acting here.