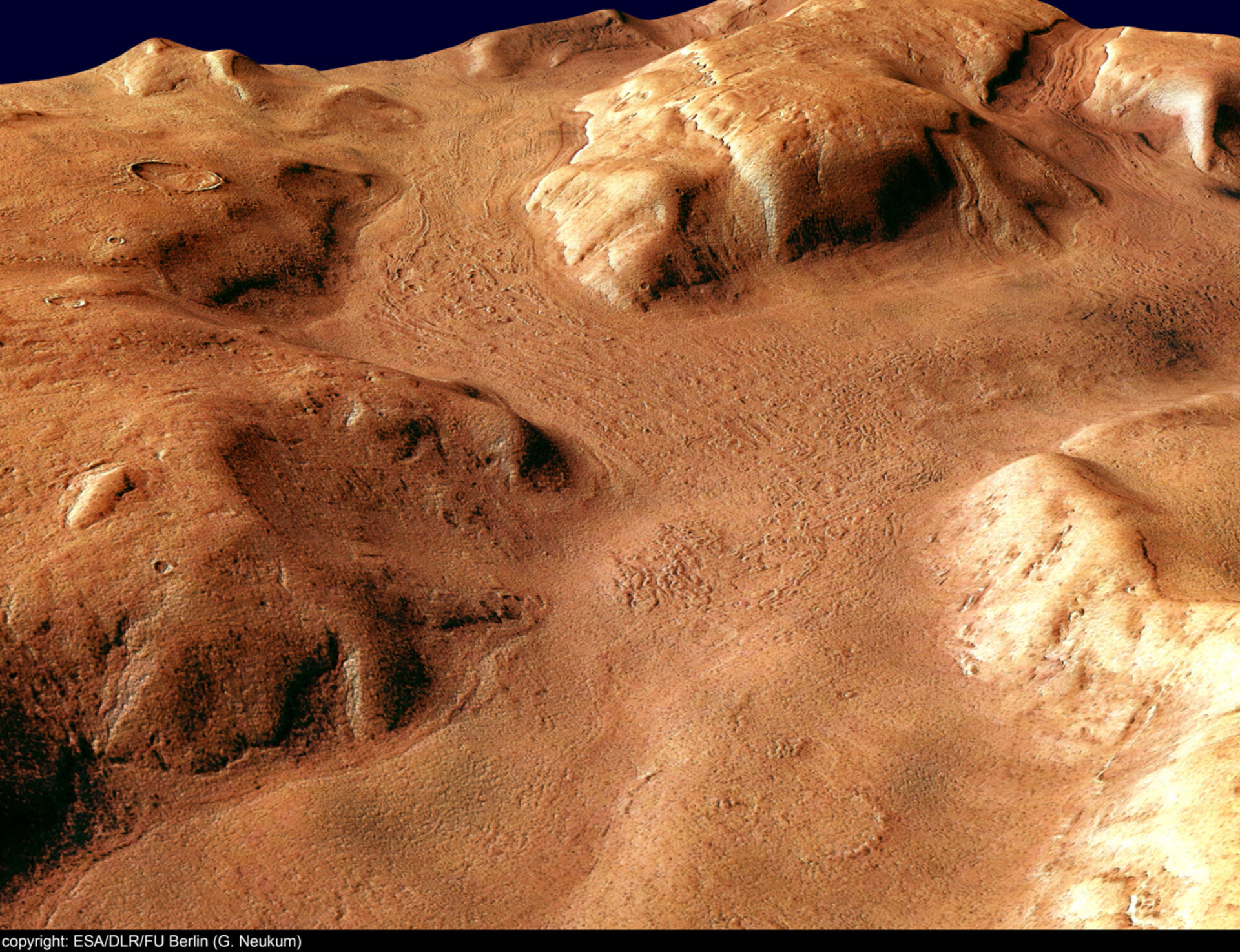 These images, taken by the High Resolution Stereo Camera (HRSC) on board ESA’s Mars Express spacecraft, show a region of Reull Vallis in the southern hemisphere of Mars.

The images show an area located at about latitude 42° South and longitude 102° East. The image was taken with a ground resolution of about 21 metres per pixel during Mars Express orbit 451 in May 2004.

Reull Vallis is an outflow channel that extends 1500 kilometres across Promethei Terra in the direction of Hellas Basin. It is approximately 20 kilometres wide and has cut into the surrounding plain to a depth of 1800 metres. It is the major outflow channel in the region and exhibits a high degree of surface modification, suggesting a complex evolution.

In these images, Reull Vallis extends from the east to the north-west and is connected to a tributary in the south (Teviot Vallis). Distinct parallel structures are visible in the channels, possibly caused by glacial flow of loose debris mixed with ice. Small depressions, located on the flow features, are probably caused by the sublimation of ice.

Numerous impact craters, visible on the flanks of the valley, have been filled with material from these flows. Distinct flow features can be recognised within impact craters, for example, the 15-kilometre wide crater in the west (bottom) of the image.

There is a clear morphological distinction between the heavily eroded south-west and the plains of the north-east, which have experienced much less erosion. While most landforms throughout the image have a rounded, softened appearance, younger structures have a distinctly sharp and raised morphology.

On the southern and western edges of the colour image, large impact craters are visible. Their diameters range from 15 to 35 kilometres. These craters have heavily eroded rims and are partly filled with material. Erosion has left distinct, branched gully systems at the edge of the large crater that is located on the southern edge of the image.

Image resolution has been decreased for use on the internet. The colour images were processed using the HRSC nadir (vertical view) and three colour channels. The perspective views were calculated from the digital terrain model derived from the stereo channels.