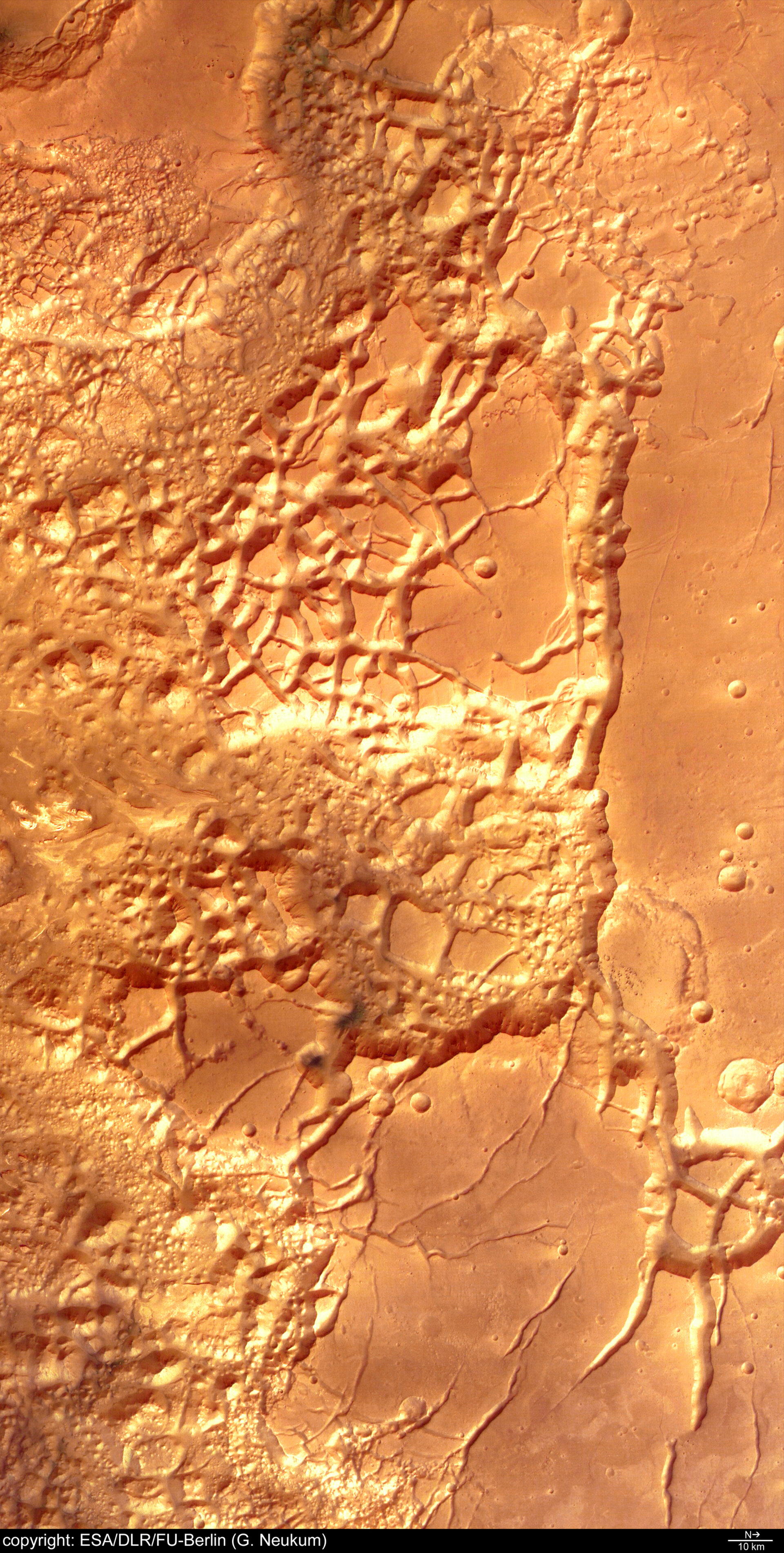 These images, taken by the High Resolution Stereo Camera (HRSC) on board ESA’s Mars Express spacecraft, show the 'chaotic' terrain of the Aureum Chaos region on Mars.

The HRSC obtained these images during orbit 456 with a resolution of approximately 25 metres per pixel. The scenes show an area located at about 3º South and 335º East.

Aureum Chaos is located in the eastern part of Valles Marineris, south-west of the 280 kilometre-wide impact crater Aram Chaos. Like this impact basin, both regions are two examples of the chaotic terrain contained in this part of the Valles Marineris.

As the name ‘chaos’ suggests, this terrain is characterised by randomly oriented, large-scale mesas and knobs that are heavily eroded and dominate the area. As seen in the main colour image, these mesas range from a few kilometres to tens of kilometres wide.

In the north (right-hand side) of this image, a well-defined scarp extends in an east-west direction.

‘Slump and collapse’ blocks can be distinguished at the base of this scarp, as highlighted in this close-up perspective view.

Near the southern border (middle left-hand side) of the colour image, a roughly five kilometre-wide region of bright material is observed. This material appears to form distinct layers that may have been created by the evaporation of fluids or by hydrothermal activity (see lower right-hand corner of the perspective view below).

Another interesting region of bright material also extends north to south in the centre of the colour image and is also visible along the left side of this perspective view.

The history of Aureum Chaos is complex. It appears that this basin was filled with sediment and then experienced the formation of chaotic terrain. It is thought that this extremely rough terrain is caused by collapse of the surface due to the removal of subsurface ice, magma or water.

By supplying new image data for Aureum Chaos, the HRSC allows scientists to improve their understanding of Mars. In particular, the colour and stereo capability of the HRSC allows improved studies of the planet’s morphology (the evolution of rocks and landforms). By analysing reflected light at different wavelengths, we can determine minerals that make up the various geological features within the scene.

Data from the HRSC, coupled with information from the other instruments on ESA’s Mars Express and other missions, will provide new insights into the geological evolution of the Red Planet and also pave the way for future missions.