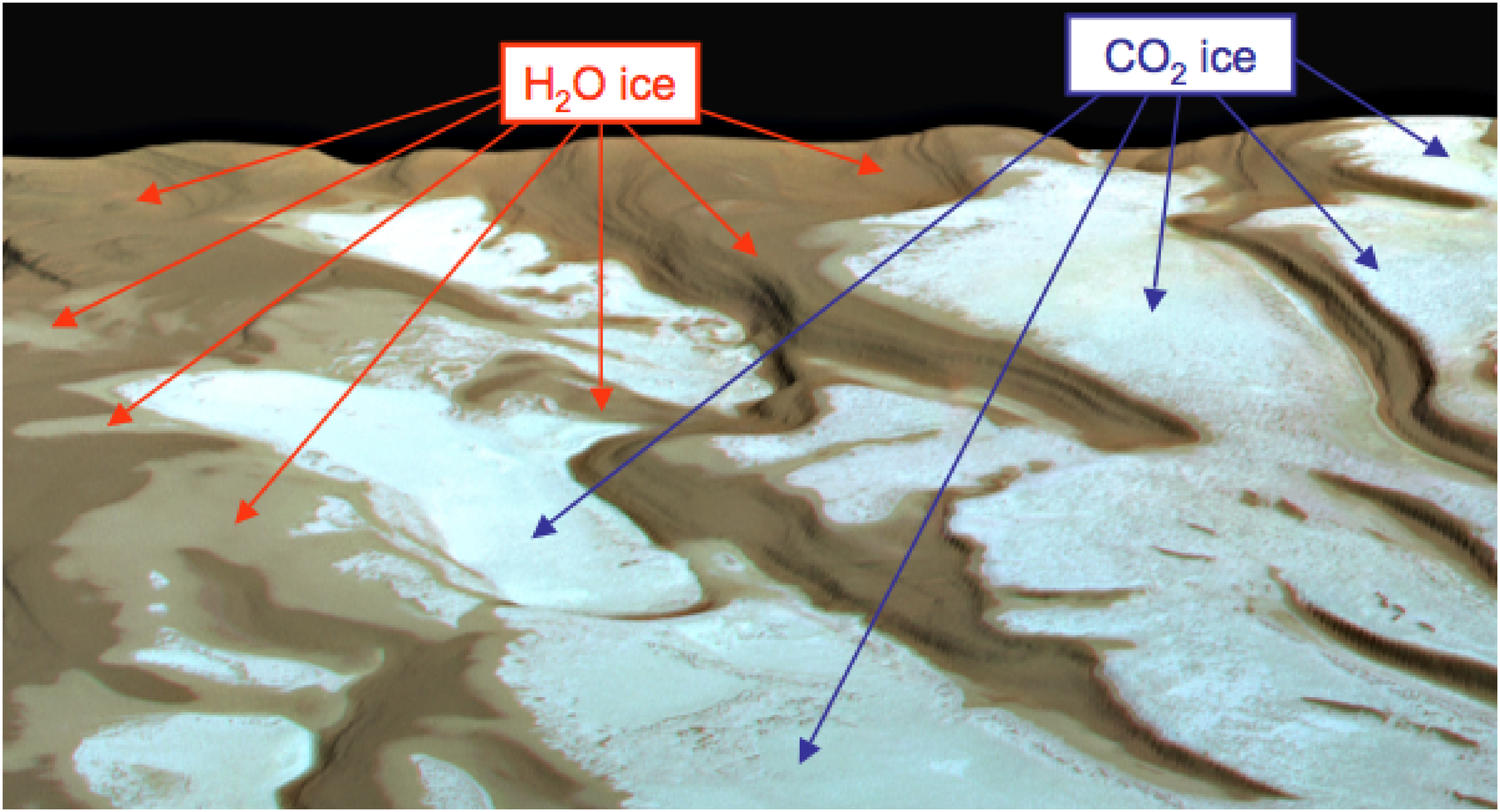 Thanks to data from ESA's Mars Express mission, combined with models of the Martian climate, scientists can now suggest how the orbit of Mars around the Sun affects the deposition of water ice at the Martian South Pole.

Early during the mission, the OMEGA instrument (Visible and Infrared Mineralogical Mapping Spectrometer) on board Mars Express had already found previously undetected perennial deposits of water-ice. They are sitting on top of million-year old layered terrains and provide strong evidence for a recent glacial activity.

However, only now a realistic explanation for the age of the deposits and the mechanism of their formation could finally be suggested. This was achieved thanks to the OMEGA mapping and characterisation of these ice deposits, combined with the computer-generated Martian Global Climate Models (GCMs).

The mapping and spectral analysis by OMEGA has shown that the perennial deposits on the Martian South Pole are of essentially three types: water-ice mixed with carbon dioxide (CO2) ice, tens-of-kilometres-wide patches of water-ice, and deposits covered by a thin layer of CO2 ice.

The discovery of the ice deposits of the first type confirms the long-standing hypothesis that CO2 acts as a cold-trap for water-ice. But how were the other two types of deposits, not ‘trapped’ by CO2, accumulated and preserved over time?

Franck Montmessin, from the Service d'Aéronomie du CNRS/IPSL (France) and lead author of the findings, explains how the deposits of water ice at the Martian's poles 'behave'. "We believe that the deposits of water-ice are juggled between Mars’ North and South Poles over a cycle that spans 51 000 years, corresponding to the time span in which the planet's precession is inverted." Precession is the phenomenon by which the rotation axis of a planet wobbles.

Montmessin and colleagues came to the conclusion by turning back time in their Mars climate computer model. This was done by changing the precession together with other orbital information.

The scientists set the clock 21 000 years back, when the closest vicinity of the planet to the Sun corresponded to the northern summer – a situation opposite to that of today.

The model has shown that water at the North Pole was in an unstable condition and was easily transported to the South Pole in the form of water vapour, to then re-condense and freeze on the surface. Up to 1 millimetre of water ice was deposited at the South Pole every year. After Mars has spent more than 10 000 years in that climatic configuration, this accumulation led to a layer up to 6-metre thick.

About 10 000 years ago the precession cycle was inverted, and started to return to its current configuration. Water-ice at the South Pole became unstable, and was forced to progressively return back to the North.

About 1000 years ago, by a not-yet-well explained trigger mechanism, the erosion of the water-ice deposits at the South pole was blocked as soon as layers of CO2 ice were deposited on the water-ice and trapped it, as OMEGA has observed them.

Mars is currently experiencing 'Southern summer' – that is, water ice is more likely to accumulate at the North Pole.

The findings appear in the paper 'On the origin of perennial water ice at the South Pole of Mars: a precession-controlled mechanism?', by F. Montmessin, R. M. Haberle, F. Forget, Y. Langevin, R. T. Clancy and J.-P. Bibring, accepted for publication in the JGR Planets journal, and presented at the 7th International Conference on Mars, Pasadena, California (9-13 July 2007).