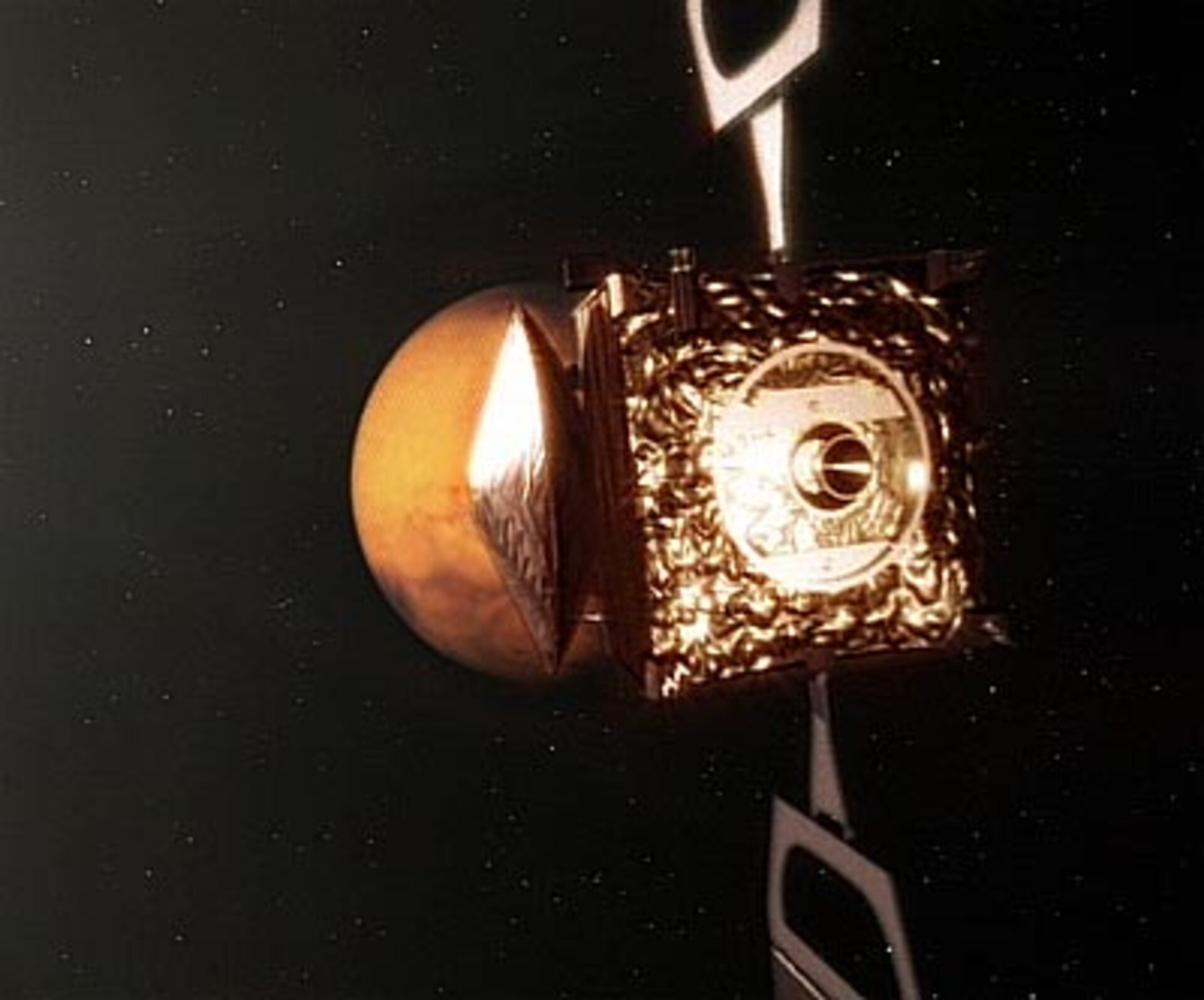 Determining the three-dimensional position of Mars Express in space with as much precision as possible, at a distance of 155 million kilometres away from Earth, is no simple business.

If the Solar System were shrunk down so that Earth was only the size of a soccer ball, then Mars Express would be a speck of dust floating well over two kilometres away!

ESA ground stations have kept track of the spacecraft's range and velocity ever since launch.

By measuring the ‘Doppler shift’ undergone by the signal coming from the distant spacecraft (like the changing sound of a passing police car siren), they can calculate the spacecraft velocity component along the line of sight to Earth down to a few millimetres per second.

‘Ranging’ data can be acquired simply by sending a signal to Mars Express then measuring how long it takes to come back.

These data are combined together by the mission's Flight Operations and Navigation team with information on the various gravitational influences of the Sun and all the planets.

Even the slightest acceleration due to solar radiation pressure is used to model the spacecraft trajectory.

But ‘ranging’ only shows where the spacecraft is in a single dimension. To independently cross-check the three-dimensional position of Mars Express at any one time requires another extremely accurate navigational procedure. This is called 'Delta differential one-way ranging', or 'Delta DOR' for short, and is carried out on Mars Express twice a day.

Delta DOR involves performing a triangulation measurement on Mars Express by acquiring its signal with two separate ground stations located on either side of the Earth.

This is done using tracking stations at Goldstone in California, Canberra in Australia and Madrid in Spain, located about 120 degrees apart. They can measure extremely precisely the difference in acquisition time between ground stations, accurate to one thousand millionth of a second.

Radio waves travel at the speed of light, so the difference in acquisition time between the two stations can be used to get separate measurements of distance and a shared point of signal origin.

There are some errors caused by differences in the two stations' clocks as well as atmospheric effects, but these are cancelled out with calibration measurements of quasars whose positions are extremely well known.

This technique can be used to decrease the degree of uncertainty about a spacecraft's position down from many tens of kilometres down to a few kilometres or less.

Besides position and velocity, the other crucial parameter is the spacecraft's attitude, or which way it is pointing. Mars Express stays linked to ESOC with a high-gain antenna that must be kept tightly pointed at Earth to an accuracy of at least one degree.

The only time the spacecraft temporarily lost this connection was when a manoeuvre – such as the Mars Orbit Insertion on Christmas Day – required Mars Express to be pointed away from Earth. Maintaining a high level of attitude control is crucial to the mission.

The spacecraft uses a ‘star tracker’, which is basically a camera that takes pictures of the star field it is pointing at twice a second . An automatic on-board system identifies stars in each image, working from a stored library of some 3,227 stars.

The library used by Mars Express's star tracker comes from data acquired by the ESA star-mapping mission Hipparcos in the early 1990s, which measured the position and distance of more than a million stars in space.

The star tracker can identify a maximum nine stars at any one time, identifying them in sets of three. Any pointing error or drift that is identified can be corrected using reaction wheels on the spacecraft.

All the ESOC mission team have to do is give attitude guidance – telling the system where the Sun is, where the Earth is and what to look at for any one time. This system gives a pointing accuracy of at least one hundredth of a degree.

The same star tracker hardware will help guide ESA's Rosetta after its launch in February 2004; however the software has been updated and includes pattern recognition systems to distinguish stars from the cometary dust the spacecraft is expected to encounter as it nears its target, Comet 67P/Churyumov-Gerasimenko.