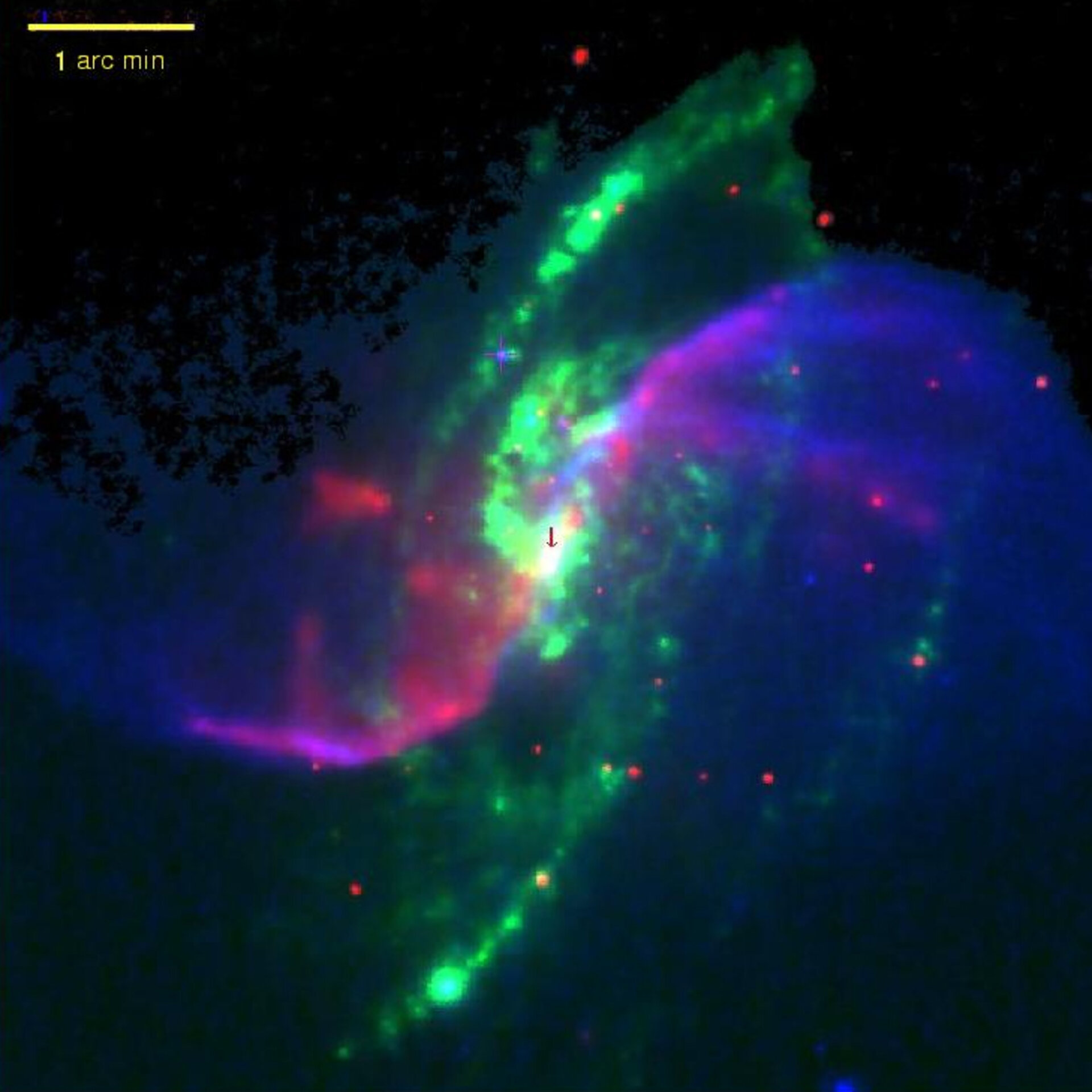 The results, obtained by a team from the University of Maryland (USA), took advantage of the unique capabilities of the ESA’s XMM-Newton X-ray observatory, NASA’s Chandra X-ray Observatory, and NASA’s Spitzer Space Telescope.

M106 (also known as NGC 4258) is a spiral galaxy 23.5 million light-years away, in the constellation Canes Venatici. In visible-light images, two prominent arms emanate from the bright nucleus and spiral outward. These arms are dominated by young, bright stars, which light up the gas within the arms.

"But in radio and X-ray images, two additional spiral arms dominate the picture, appearing as ghostly apparitions between the main arms," says team member Andrew Wilson of the University of Maryland. These so-called "anomalous arms" consist mostly of gas.

"The nature of these anomalous arms is a long-standing puzzle in astronomy," says Yuxuan Yang, lead author of the team. "They have been a mystery since they were first discovered in the early 1960s."

By analyzing data from XMM-Newton, Spitzer, and Chandra, the team have confirmed earlier suspicions that the ghostly arms represent regions of gas that are being violently heated by shock waves.

It has been previously suggested that the anomalous arms are jets of particles being ejected by a supermassive black hole in M106’s nucleus. But radio observations at the Very Large Array in New Mexico later identified another pair of jets originating in the core. "It is highly unlikely that an active galactic nucleus could have more than one pair of jets," says Yang.

In 2001, researchers at the University of Maryland and the University of North Carolina noted that the two jets are tipped 30 degrees with respect to the disk. But if one could vertically project the jets onto the disk, they would line up almost perfectly with the anomalous arms.

Figuring that this alignment was not strictly a matter of chance, the team proposed that the jets heat the gas in their line of travel, forming an expanding cocoon. Because the jets lie close to M106’s disk, the cocoon heats gas in the disk and generates shock waves, heating the gas to millions of degrees and causing it to radiate brightly in X-rays and other wavelengths.

To test this idea, Yang and his colleagues looked at archival spectral observations from XMM-Newton. With XMM-Newton’s superb sensitivity, the team could measure the gas temperature in the anomalous arms and also see how X-rays from the gas are absorbed en route by intervening material.

"One of the predictions of this scenario is that the anomalous arms will gradually be pushed out of the galactic disk plane by jet-heated gas," says Yang. The XMM-Newton spectra show that X-rays are absorbed more strongly in the direction of the north-west arm than in the southeast arm. The results strongly suggest that the southeast arm is partly on the near side of M106’s disk, and the northwest arm is partly on the far side.

The scientists noted that these observations show clear consistency with their scenario. Confirmation of this interpretation has recently come from archival observations from NASA’s Spitzer Space Telescope. The infrared view from Spitzer shows clear signs that X-ray emission from the northwest arm is being absorbed by warm gas and dust in the galaxy’s disk. Moreover, Chandra’s superior imaging resolution gives clear indications of gas shocked by interactions with the two jets.

Besides addressing the mystery of the anomalous arms, these observations allowed the team to estimate the energy in the jets and gauge their relationship to M106’s central black hole.