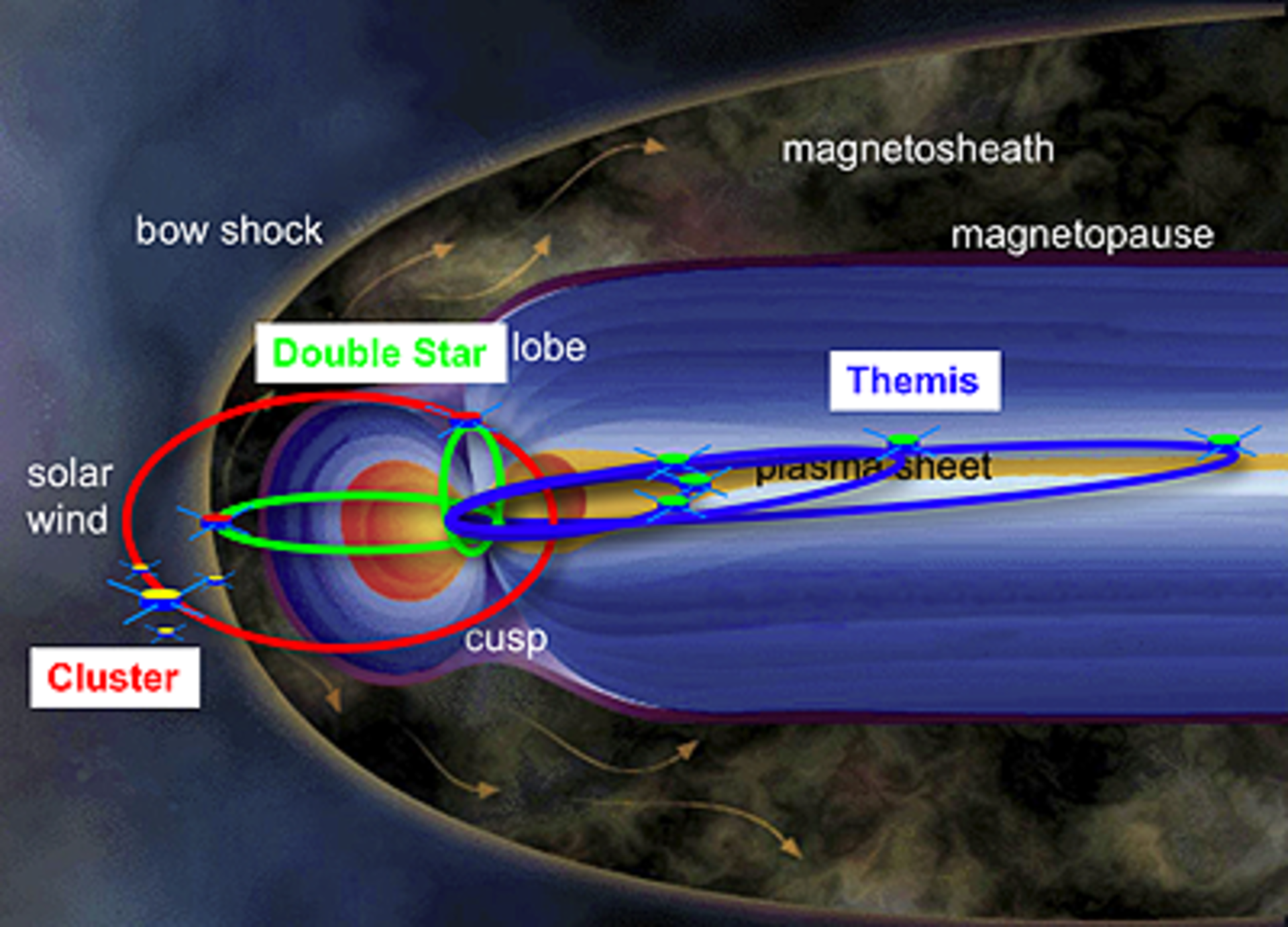 Tonight NASA plans to launch its five THEMIS scientific satellites onboard a Delta-2 rocket from Cape Canaveral, Florida USA, to join the spacefleet of Sun-Earth connection explorers – four from the ESA Cluster mission and two from the CNSA/ESA Double Star mission.

The main scientific objective of THEMIS (Time History of Events and Macroscale Interactions during Substorms) is to find what triggers magnetic substorms. This phenomenon corresponds to periods of time during which violent changes happen within the Earth's magnetic environment or magnetosphere. It is triggered at distances from one tenth to half the Earth-Moon distance on the nightside of Earth and hurls energetic particles towards our planet. These particles are responsible for the very bright and colourful auroras and are usually harmless. However, when the Sun unleashes massive clouds of charged particles towards Earth, a series of 10 or more substorms can occur in rapid succession. Such a series may be responsible for the failure of power grids and satellites observed during some of these events.

Cluster is the first space mission composed of four satellites flying in formation to study the Sun-Earth connection. Launched in 2000, this mission, originally planned for two years, has been extended to the end of 2009. It was joined in 2003 by the first Double Star spacecraft named TC-1 and in 2004 by TC-2, both partially equipped with spare instruments of the Cluster satellites. Double Star is the first Chinese scientific space mission in the Earth's magnetosphere.

The THEMIS satellites will be highly complementary to the Cluster and Double Star ones since they will monitor opposite regions of the magnetosphere with respect to Earth. For example, during winter season 2007/2008, while THEMIS will be in the magnetotail (nightside) studying the source region of the substorms, the Cluster mission will spend a significant part of its orbit around Earth in the solar wind (dayside) and cross the auroral region at mid-altitude. The apogee of TC-1 is located approximately in between. For the first time, about half of the magnetosphere and its environment will be monitored simultaneously by state-of the-art scientific instrumentation, thanks to these three missions.

THEMIS is the fifth medium–class mission selected by NASA under its Explorer Program with Professor Vassilis Angelopoulos (Space Science Laboratory of UC Berkeley, USA) as Principal Investigator of the mission. Each THEMIS satellite carries an identical set of five scientific instruments. The development of two of these instruments was done in close collaboration between American and European institutes from Austria, France and Germany. Part of the electronics of these instruments has been manufactured in Europe. Several European research institutes will take an active part in the scientific exploitation of these future measurements. Such a deep scientific collaboration is not a first. It is built on years of fruitful collaboration such as that on Cluster where discoveries have been made thanks to active collaboration between researchers from both sides of the Atlantic.

"This is the first time in history of Space Physics that such a high number of scientific satellites are in operation simultaneously. It represents an unprecedented opportunity to study the global solar-magnetospheric environment and the physical processes involved. We wish all the best to our American colleagues for a successful launch", says ESA's Philippe Escoubet, Double Star and Cluster project scientist. For more information on the Sun-Earth explorers, contact: