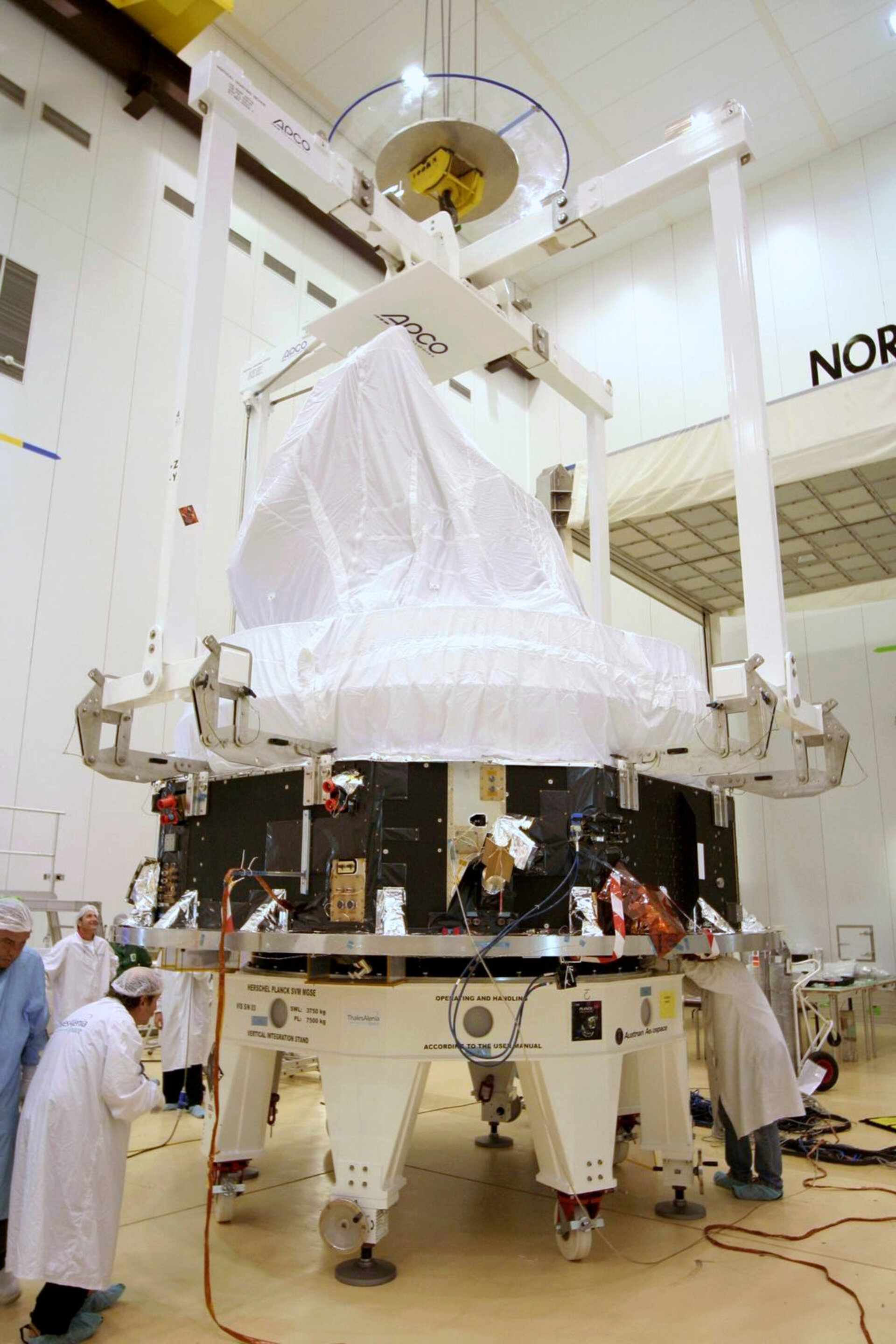 Tests conducted on Planck at Europe's Spaceport in Kourou, French Guiana, have confirmed that the satellite's subsystems work perfectly, and the helium dilution cooler tanks have now been filled. While the final clean-up continues, the solar array has been checked, the satellite has been integrated with its launcher adapter and fuelling is complete.

The last of the system reference tests, of the telemetry and telecommand subsystem, was completed on 17 March. The tests, carried out over the period of a month, confirm that the satellite is in perfect condition for launch.

Both helium isotopes are stored under very high pressure in special tanks and the helium will be depleted slowly during the mission.

The supply cylinders containing the pressurised helium were inspected on 9 March and the filling operation started later that day. By 11 March, the helium tanks were filled with helium 3 (one tank) and helium 4 (three tanks) at a high pressure, up to 295 bar.

Engineers have installed final pieces of the multi-layer insulation (MLI) at the top of the service module. All satellite surfaces, including three reflective thermal shields that separate the payload and service modules, have been cleaned thoroughly.

During the flood test, engineers illuminated various sections of the external solar array and checked all electrical connections with the satellite’s power system.

Integration with the launcher adapter

Planck was integrated with its launcher adapter on 1 April. The launcher adapter is a lightweight metal cylinder, 0.32 m high and 2.624 m in diameter, which fixes the satellite to the launch vehicle.

Planck will use its thrusters, powered by liquid hydrazine, for any manoeuvres once in orbit. Hydrazine is a volatile and toxic substance, commonly used as rocket fuel.

The critical fuelling operations required plenty of preparation, including safety training exercises for the fuelling team, and was executed with great care.

The operation was carried out over two days, 15-16 April, in a special room on the launch site. The personnel involved were dressed in Self-Contained Atmospheric Protective Ensemble, or ‘SCAPE suits’. They carried out the fuelling operation in two shifts each day.

The Planck service module includes three propellant storage tanks where the hydrazine is stored. These tanks were pressurized with nitrogen before the hydrazine was loaded. They were filled with 128 kg of liquid hydrazine each. This supply will be enough for the satellite’s two years in orbit, and includes a safety margin.

Once fuelling was completed, engineers thoroughly decontaminated all the equipment used in the process, ensuring that it was hydrazine-free, to 0.1 part per million. At the end of the hydrazine fuelling, the satellite was switched on.

The adapter that will connect Planck to the Ariane 5.