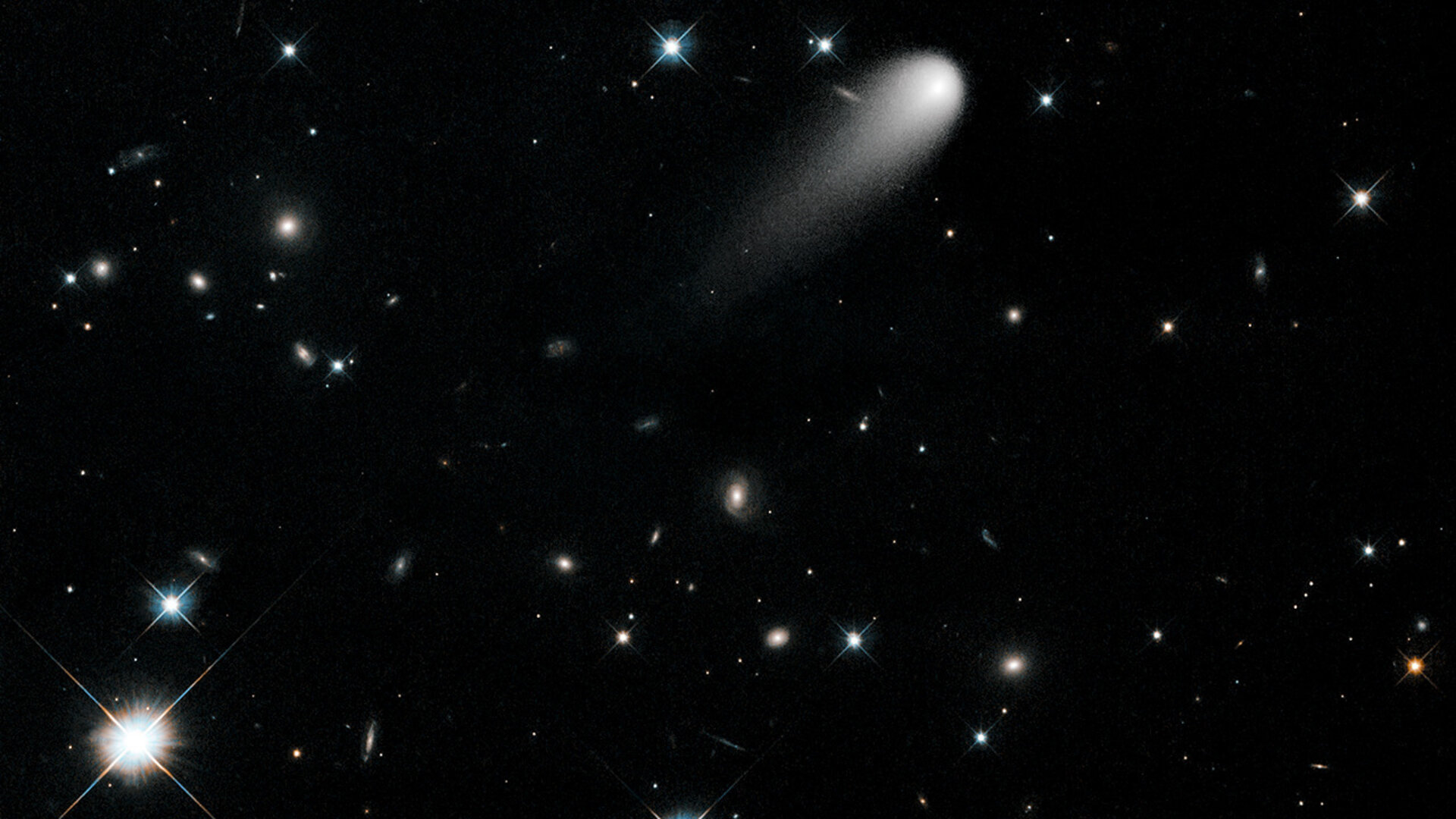 ESA’s space missions are getting ready to observe an icy visitor to the inner Solar System: Comet ISON, which might also be visible in the night sky later this year as a naked eye object.

The comet was discovered in images taken on 21 September 2012 by astronomers Artyom Novichonok and Vitali Nevski using a 40 cm-diameter telescope that is part of the International Scientific Optical Network, ISON.

Originating from the Oort Cloud, a repository of icy bodies billions of kilometres from the Sun, ISON is on a path that will bring it within grazing distance – 1.2 million kilometres – above the Sun’s visible surface on 28 November.

The NASA/ESA Hubble Space Telescope took detailed images earlier this year, such as the main image presented here from 30 April. In this composition, the comet is set against a separately imaged background of stars and galaxies.

For some time the view of the comet from Earth was temporarily blocked by the Sun, but it was spotted again in August, by amateur astronomer Bruce Gary.

Astronomers around the world are now eagerly watching as the comet draws closer, its coma – the tenuous atmosphere that surrounds the comet’s rock–ice nucleus – becoming more pronounced as its surface ices are heated by the Sun and transformed into gas. Dusty debris is suspended in the coma and swept into a tail, which will also become more prominent as the comet approaches the Sun.

Astronomer Pete Lawrence from the UK imaged Comet ISON (shown right) on 15 September, as it passed through the constellation of Cancer en route to Leo. Pete used a 10 cm-diameter telescope with a CCD camera attached; the exposures totalled 40 minutes, with individual images stacked together to produce the final result.

ESA and NASA space missions are also preparing to observe the comet. Tonight, ESA’s Mars Express starts its observation campaign, taking photos and analysing the composition of the comet’s coma over the next two weeks. The comet will be at its closest to Mars on 1 October – at a distance of 10.5 million kilometres – six times closer than it will approach Earth.

The ESA/NASA SOHO mission will view the comet as it swings around the Sun at the end of November, and astronomers will be waiting to see if the comet survives its fiery encounter.

ESA’s Venus Express and Proba-2 also plan to target the comet during November and December.

The comet will be brightest in our skies just before and in the week after its encounter with the Sun, assuming it survives, but will likely have faded by the time it makes its closest approach to Earth on 26 December. It will pass Earth with no threat of impact.

Since comets are unpredictable by nature, and planet-orbiting spacecraft are not primarily designed to observe distant comets, it is uncertain exactly what results are to be expected. But while we await the results from spacecraft, there is clearly much to be seen from the ground already.