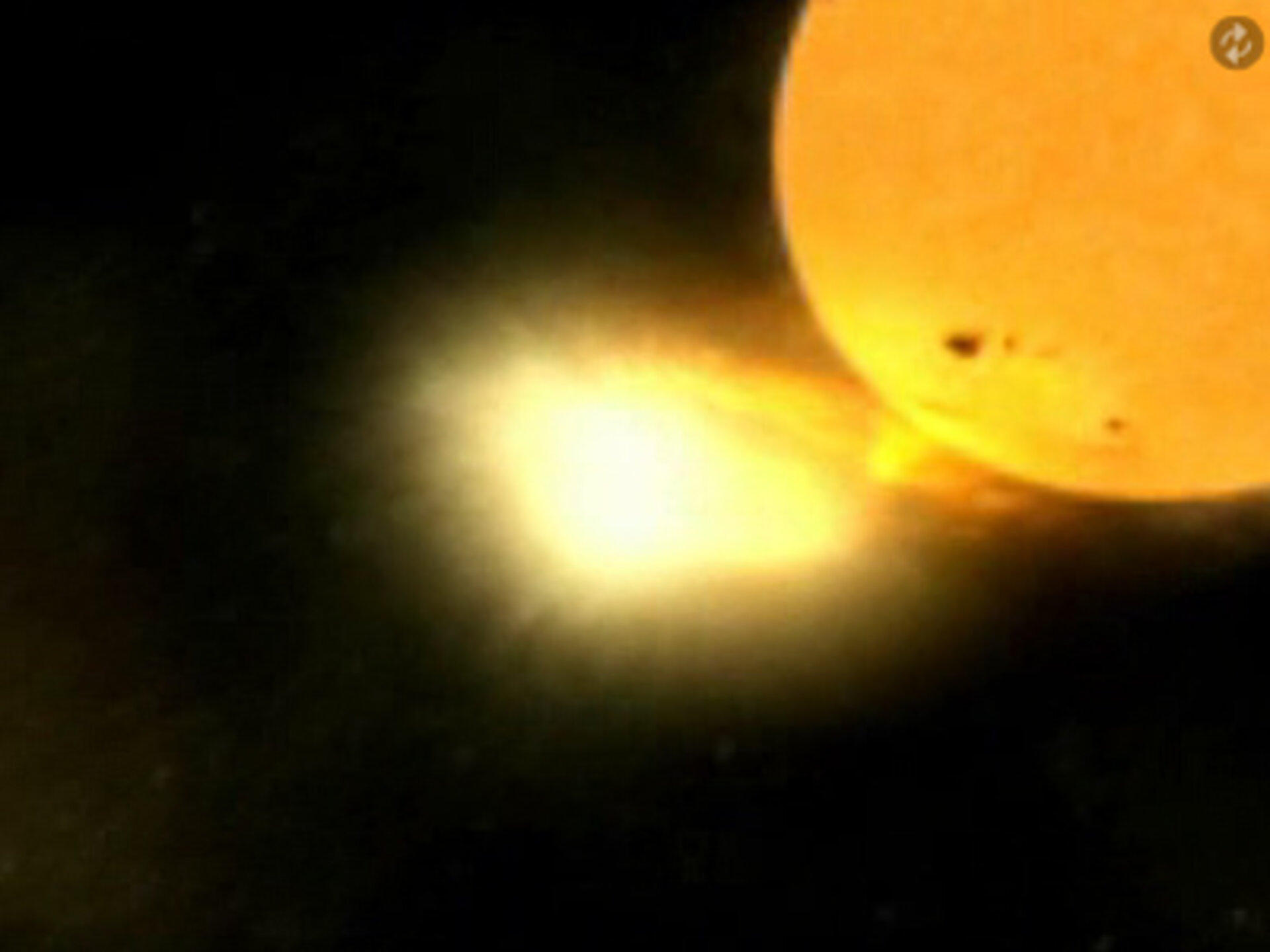 Scientists made the connection by analysing observations of CMEs from ESA/NASA’s SOHO (Solar and Heliospheric Observatory) and NASA’s Wind spacecraft. The team includes researchers from Goddard, the Catholic University of America, Washington, the Naval Research Laboratory, Washington, and the Observatory of Paris.

A CME is a solar slam to our high-tech civilisation. It begins when the Sun launches a thousand million tons of electrically conducting gas (plasma) into space at millions of kilometres per hour.

Some CMEs also bring intense radiation storms that can disable satellites or cause cancer in unprotected astronauts. As the CME blasts through space, it plows into a slower stream of plasma blown constantly from the Sun in all directions, called the solar wind. The CME causes a shock wave in the solar wind. If the shock is strong enough, it accelerates electrically charged particles that make up the solar wind to high speeds, forming the radiation storm.

"Some CMEs produce radiation storms, and some don't, or at least the level of radiation is significantly lower," said Dr. Natchimuthuk Gopalswamy of NASA's Goddard Space Flight Center in Greenbelt, Maryland, lead author of the results. "The trick is to identify the ones that can produce dangerous radiation, so we can warn astronauts and satellite operators."

Gopalswamy and his team may have found a way to do just that. CMEs with powerful shocks capable of causing radiation storms ‘scream’ in radio waves as they slam through the solar wind, according to the team.

SOHO’s Large Angle and Spectrometric Coronagraph (LASCO) can see CMEs and the Energetic and Relativistic Nucleon and Electron experiment (ERNE) detects their radiation. Wind has an instrument that can pick up a CME's radio signal (The Radio and Plasma Wave experiment).

The team compared observations from both SOHO and Wind and looked at 472 CMEs between 1996 and 2005 that were fast and covered a large area of the sky. They discovered that those CMEs which generated a radio signal also produced radiation storms, but CMEs without a radio signal did not.

"Since the radio signal moves at the speed of light while the particles lag behind, we can use a CME's radio noise to give warning that it is generating a radiation storm that will hit us soon," said Gopalswamy. "This will give astronauts and satellite operators anywhere between a few tens of minutes to a couple of hours to prepare, depending on how fast the particles are moving."

The team also noticed that most radio-loud CMEs came from parts of the Sun in line with Earth (areas near the solar equator), while radio-quiet CMEs mostly came from the edges of the Sun. Since all the CMEs studied were fast and could have produced strong shocks, detecting radio noise and radiation from some but not others might simply be due to geometry.

CMEs near the edge of the Sun only present a small section of their shock surface towards us as they expand through space, and therefore tend to be radio-quiet and radiation-free from our point of view, according to the team. However, it means that explorers on other worlds in our Solar System, like Mars, will need a spacecraft positioned between them and the Sun to take advantage of the radio warning.

The research, funded by NASA, is presented at the American Astronomical Society's 210th Meeting during 27-31 May 2007 in Honolulu, Hawaii.

SOHO is a cooperative project between ESA and NASA, launched in 1995. NASA's Wind spacecraft was launched on 1 November 1994.