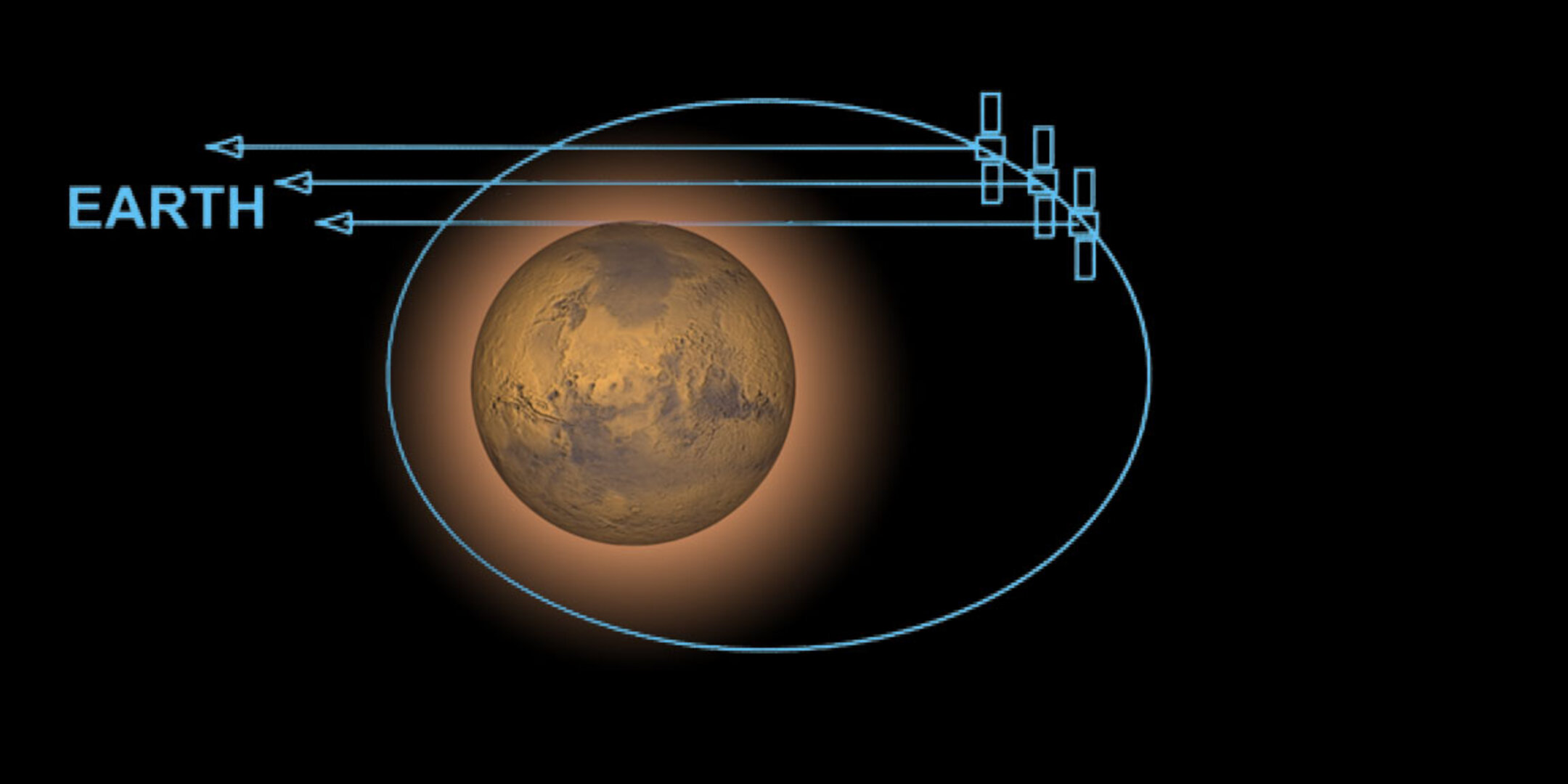 During radio observations of the atmosphere of Mars, the MaRS radio-science experiment on board ESA's Mars Express discovered the presence of a previously unseen third layer in the ionosphere – the upper part of the Martian atmosphere.

This layer, whose existence was predicted but not detected before, is non-continuous. Scientists believe its origin may be due to the interaction of the ionosphere with incoming meteorites.

The MaRS experiment consists of using the radio signals that the spacecraft uses to communicate with Earth to probe the atmosphere and the ionosphere of Mars.

The technique, called radio-occultation, can be used when the spacecraft 'disappears' behind the planet's disk as seen from Earth: the radio signals cross the Martian ionosphere between the spacecraft and Earth and reveal information about the density of charged particles that compose it.

During two Mars Express occultation seasons – from April to August 2004 and from December 2004 to January 2005 – MaRS detected the presence of regions in the atmosphere where the density of charged particles (electrons) was about one tenth of the density of the main ionospheric layer.

These higher density regions were observed in a few ionospheric areas only. Having confirmed this through several observations, scientists concluded that this third layer is sporadic and geographically localised.

At the same time, the presence of the layer was observed at different times of the day and latitudes – early morning and afternoon in the northern hemisphere of the planet, in the equatorial region and at mid-southern latitudes.

"In any case, we do not exclude the existence of the third layer also in the night-time portion of the ionosphere, even if we believe such occurrence may be rare," says Martin Pätzold, MaRS Principal Investigator.

As far as the origin of this layer is concerned, Pätzold and colleagues imagine that a mechanism similar to that occurring in Earth's ionosphere may be in place at Mars.

On Earth, a low ionospheric layer also exists. Unlike the Red Planet, it is non-sporadic and created by electrical charge exchange between the atmosphere and the magnesium and iron atoms present in meteors. In fact, it is called the 'meteoritic layer'.

"We favour the idea that the third layer is created by the influx of meteors, like on Earth," says Pätzold. "On Mars, the atmosphere is thinner and less dense than on Earth. Meteors then require larger kinetic energy than on Earth to exchange charged particles above 75 km altitude, where the Martian atmosphere becomes really thin. The population of meteors with this energy is more limited: this could explain the sporadic occurrence of the third ionopsheric layer on Mars," he concludes.

These scientific results appeared in the 4 November issue of the journal Science, in an article entitled: 'A sporadic third layer in the ionosphere of Mars'.

Mars Express was launched on 2 June 2003 and has been orbiting Mars since December 2003. On 19 September ESA took the decision to extend the mission by one additional Martian year (23 months), as of December 2005.