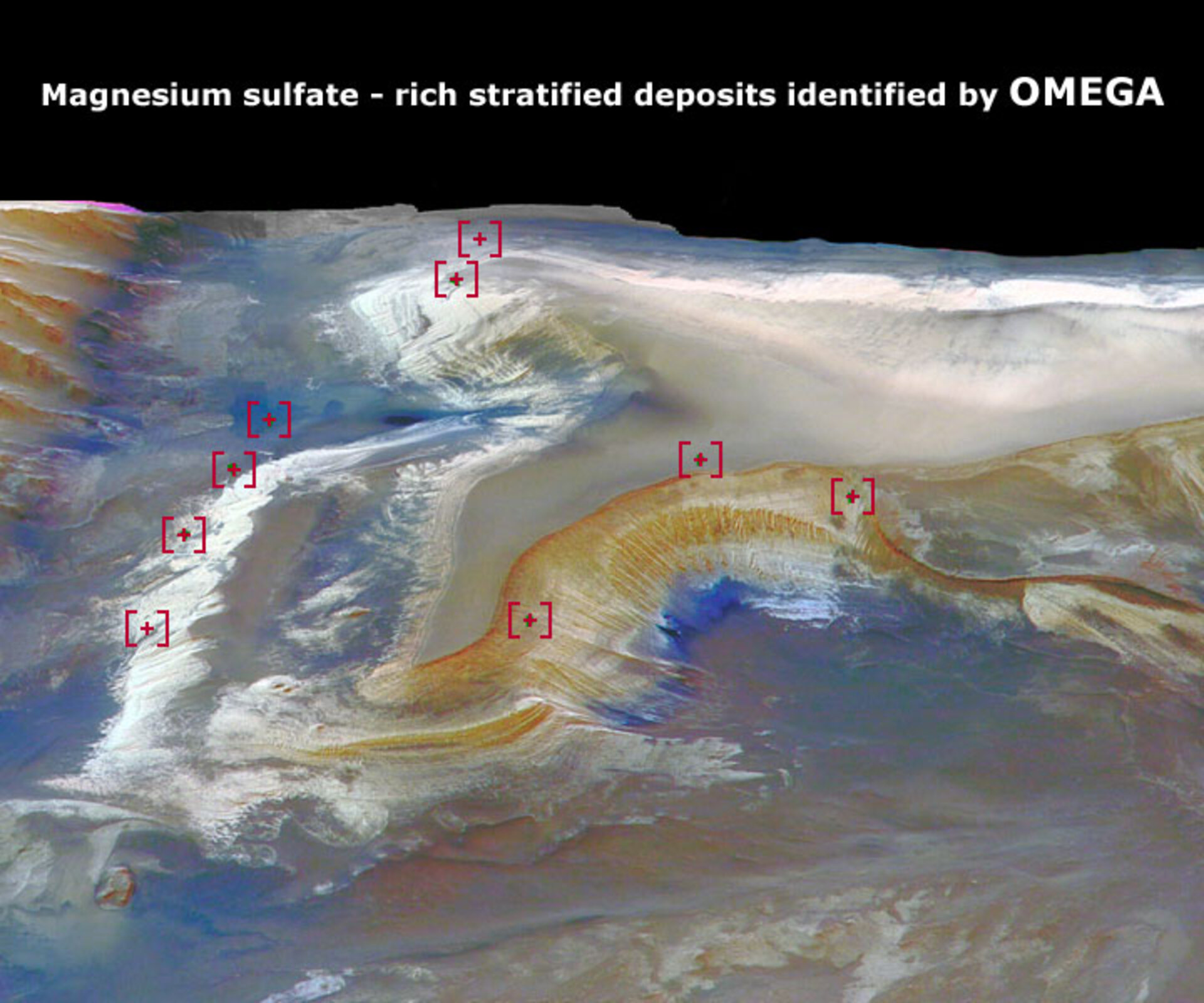 Substantial quantities of liquid water must have been stably present in the early history of Mars. The findings of OMEGA, on board ESA's Mars Express, have implications on the climatic history of the planet and the question of its 'habitability' at some point in its history.

From previous observations, Mars must have undergone water-driven processes, which left their signature in surface structures such as channel systems and signs of extensive aqueous erosion. However, such observations do not necessarily imply the stable presence of liquid water on the surface over extended periods of time during the Martian history.

The data collected by OMEGA unambiguously reveal the presence of specific surface minerals which imply the long-term presence of large amounts of liquid water on the planet.

These 'hydrated' minerals, so called because they contain water in their crystalline structure, provide a clear 'mineralogical' record of water-related processes on Mars.

During 18 months of observations OMEGA has mapped almost the entire surface of the planet, generally at a resolution between one and five kilometres, with some areas at sub-kilometre resolution.

The instrument detected the presence of two different classes of hydrated minerals, 'phyllosilicates' and 'hydrated sulphates', over isolated but large areas on the surface.

Both minerals are the result of a chemical alteration of rocks. However, their formation processes are very different and point to periods of different environmental conditions in the history of the planet.

Phyllosilicates, so-called because of their characteristic structure in thin layers ('phyllo' = thin layer), are the alteration products of igneous minerals (minerals of magmatic origin) sustaining a long-term contact with water. An example of phyllosilicate is clay.

Phyllosilicates were detected by OMEGA mainly in the Arabia Terra, Terra Meridiani, Syrtis Major, Nili Fossae and Mawrth Vallis regions, in the form of dark deposits or eroded outcrops.

Hydrated sulphates, the second major class of hydrated minerals detected by OMEGA, are also minerals of aqueous origin. Unlike phyllosilicates, which form by an alteration of igneous rocks, hydrated sulphates are formed as deposits from salted water; most sulphates need an acid water environment to form. They were spotted in layered deposits in Valles Marineris, extended exposed deposits in Terra Meridiani, and within dark dunes in the northern polar cap.

When did the chemical alteration of the surface that led to the formation of hydrated minerals occur? At what point of Mars's history was water standing in large quantities on the surface? OMEGA's scientists combined their data with those from other instruments and suggest a likely scenario of what may have happened.

"The clay-rich, phyllosilicate deposits we have detected were formed by alteration of surface materials in the very earliest times of Mars," says Jean-Pierre Bibring, OMEGA Principal Investigator.

"The altered material must have been buried by subsequent lava flows we observe around the spotted areas. Then, the material would have been exposed by erosion in specific locations or excavated from an altered crust by meteoritic impacts," Bibring adds.

Analysis of the surrounding geological context, combined with the existing crater counting techniques to calculate the relative age of surface features on Mars, places the formation of phyllosilicates in the early Noachian era, during the intense cratering period. The Noachian era, lasting from the planet's birth to about 3.8 thousand million years ago, is the first and most ancient of the three geological eras on Mars.

"An early active hydrological system must have been present on Mars to account for the large amount of clays, or phyllosilicates in general, that OMEGA has observed," says Bibring.

The long-term contact with liquid water that led to the phyllosilicate formation could have existed and be stable at the surface of Mars, if the climate was warm enough. Alternatively, the whole formation process could have occurred through the action of water in a warm, thin crust.

OMEGA data also show that the sulphate deposits are distinct from, and have been formed after, the phyllosilicate ones. To form, sulphates do not need a particularly long-term presence of liquid water, but water must be there and it must be acidic.

"If we look at today's evidence, the era in which Mars could have been habitable and sustained life would be the early Noachian, traced by the phyllosilicates, rather than the sulphates. The clay minerals we have mapped could still retain traces of a possible biochemical development on Mars," Bibring concludes.

These results appear on line in Nature, on 30 November 2005, in an article called: 'Phyllosilicate on Mars and implications for early Martian climate', by: